Tennesseans on the Move 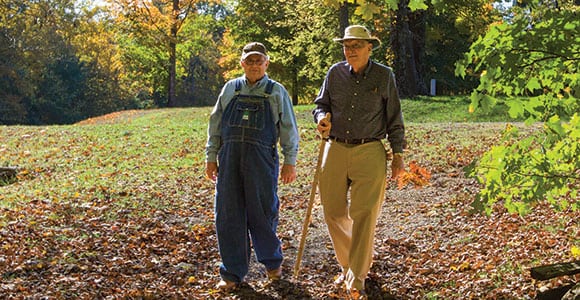 One of the greatest tragedies of history is when that history is lost. That’s why one could view historians as heroes. They work long hours with dedication to accuracy and minute details to ensure that the stories of our shared history aren’t lost to the passage of time. Some of these historians are professionals who have degrees in history and teach at colleges, who write books that hit the New York Times bestseller list. But they aren’t the only ones out there day after day preserving the history of America’s nooks and crannies. Sometimes it’s people like Jack Masters and Bill Puryear, who have harnessed their passion for a specific slice of that history.

Masters’ and Puryear’s names may sound familiar since we featured them before in The Tennessee Magazine when they published the first two volumes chronicling the history of the Cumberland Settlements. This fall marks the release of the third volume of the well-received series, “The First Southwest: The Third Atlas, The Cumberland and Duck River Settlements.” The book explores the expansion of settlement to the south and west. Topics explored include ones familiar to any student of American history: the War of 1812, President Andrew Jackson and westward expansion. All of these are covered with a uniquely Tennessee perspective.

Puryear says this project has been “very interesting” as he and Masters were “documenting and narrating the leading role Tennessee (the most southwestern of the states in 1800) and Tennesseans played in expanding the United States to the Gulf, to the Rio Grande and to the Pacific Ocean.”

“Tennessee’s role has never been adequately recognized in history books,” he adds.

At first glance, one might appreciate the effort that has gone into producing this book as well as the two volumes that preceded it. It’s not until you read about how very much time and effort went into their production that you really marvel at what Masters and Puryear have done. According to their own words in the opening, they have dedicated seven of their retirement years to this project. That’s seven years of walking old roads and trails that have almost been erased by time and weather, digging up relics once used by our ancestors and reading microfilm until their eyes likely crossed. What’s truly astounding is the fact that they’ve read more than 8,000 land surveys and transcribed nearly half of them as well as many more thousand military pay records, deeds for property and slaves, wills and genealogical records and countless pages of old books.

It seems as though reading all that material would have taken seven years — to say nothing of the writing of the three books that have resulted from all that research. And all that work hasn’t gone unnoticed, as evidenced by the reviews the books have received.

“Once in a great while a book comes along that is so outstanding with so much time and dedication invested in it by its authors that it causes others to stand in awe,” wrote Shirley Wilson, retired director of the Sumner County Archives, in her review.

So how would the authors themselves describe this journey if they only had one word to do so?

Puryear quickly follows by saying, “Rewarding, in the sense of time travel it gave me. Excavating the palings, silverware and china from a fort my ancestor built and lived in over two centuries ago has to rank as one of the most memorable events of my life.”

Masters agrees that all the time and effort have definitely been a labor of love. “The most rewarding part is being able to document and supply people a link to their pioneer ancestors through land ownership and basic pioneer information previously unavailable,” he says

This third atlas, like the first two, is illustrated with striking artwork by Puryear and David Wright, noted painter of historical subjects. They say a picture is worth a thousand words, and these pieces of art definitely help to tell the story of those early Tennesseans, both Native American and European immigrants. But perhaps of most interest to fellow historians and genealogists is the collection of maps showcasing early land grants, roads and landmarks.

Now that this huge undertaking is coming to a close, what’s next for these dedicated history buffs?

For Masters, it’s time to explore other historical subjects. “It has been difficult to stay focused on the core subjects we have been researching for the past several years,” he says. “With no more book deadlines, I’ll be able to get into interesting areas of history I have previously not been able to research. I am also planning a trip to West Virginia to metal-detect some early Civil War sites as well.”

Puryear plans to spend time blending two of his loves. “I’ll probably return to painting landscapes and historic sites. A lot of my time is also taken up by answering questions and following leads submitted to me by readers of our series from all over America, which has brought me many new friends.”

Wherever the road leads them, there’s little doubt that Masters and Puryear will bring their love of history and devotion to accurate detail with them. And the historical record will be better for it. 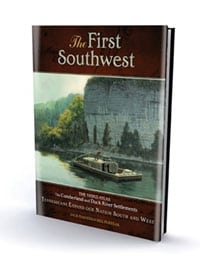 Explore it for yourself

For more information, including how to order your own copy of “The First Southwest,” call 615-330-9013, visit www.cumberlandpioneers.com or contact The Book Foundry by emailing [email protected].