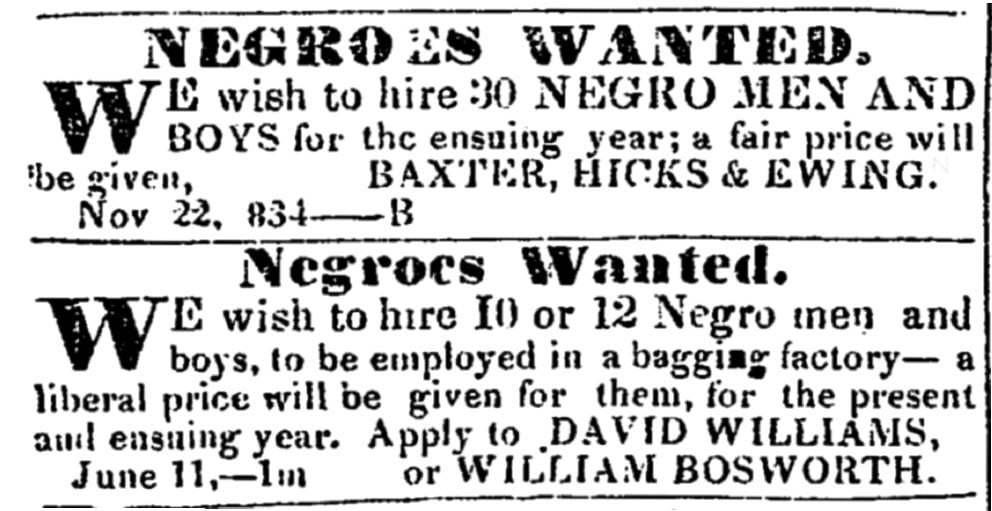 A literal paper trail pieces together a dark chapter in our history and reminds us never to repeat it again.

The government of Nashville owned 26 slaves. chancery court officials routinely sold slaves at practically every courthouse in the state. Companies ranging from cotton mills to railroads advertised for slave labor. The state of Tennessee gave away slaves as young as 3 years old in a lottery. A slave died in the construction of the Tennessee State Capitol.

These are just some of the discoveries I made during a journey that started with a column and ended with a book.

Back in October, I went to the Tennessee State Library and Archives in Nashville. At the time, I thought I would write a column about the first few issues of the Knoxville Gazette newspaper, which debuted in 1791. I thought the column would be funny.

However, when I pulled up the first few issues of the Gazette, I noticed something far from amusing. The Gazette had slavery-related advertising in every issue: runaway slave ads, items announcing the sheriff’s capture of runaway slaves, slave sale ads and “slave wanted” ads. This took me by surprise; after all, those of us who write about Tennessee history don’t often talk about slavery in East Tennessee in the 1790s.

I eventually looked through every antebellum newspaper I could find. I organized the ads into categories and created spreadsheets with notes on their contents. To learn more about the subject, I bought several books on slavery, the best of which was one titled “Slave Trading and the Old South,” printed in 1931. I kept digging.

I eventually wrote a book called “Runaways, Coffles and Fancy Girls: A History of Slavery in Tennessee.” It contains, among other information, details about how slavery made its way into Tennessee in frontier times until it was abolished during the Civil War. It includes chapters on the slave trade and how slavery was embedded in the economy. It also contains data from no fewer than 906 runaway slave ads that document the flight of more than 1,400 Tennessee slaves, starting in 1791 and going until 1864.

Here are some of the more notable revelations:

The separation of slave families is also documented in advertisements related to the sale of slaves. Slaveholders often indicated in such ads their intentions to sell some members of a slave family (such as children) but not others.

One more thing about my research and discoveries: There are old newspapers held by local libraries and collectors that are not on microfilm at the Tennessee State Library and Archives. I did the best I could, but I didn’t discover everything.

“Runaways, Coffles and Fancy Girls: A History of Tennessee” is available wherever books are sold. You can also purchase signed copies on the website www.clearbrookpress.com.