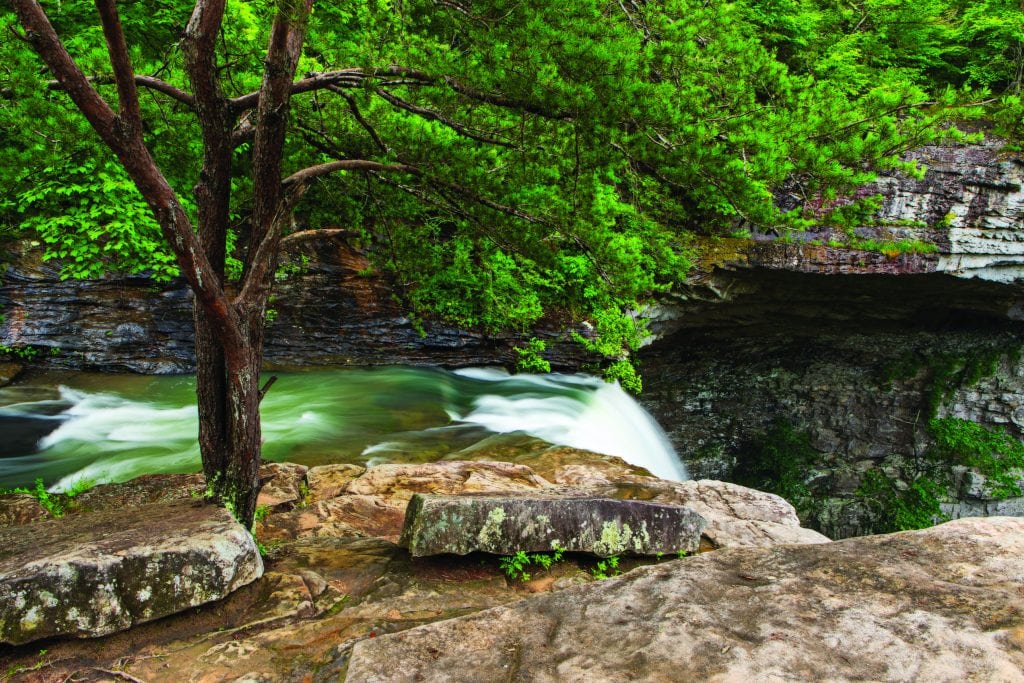 A few weeks ago, I was driving home on Interstate 40 from a photo shoot in East Tennessee and decided to stop at Ozone Falls in Crab Orchard. The roadside parking for the state natural area is just a couple of miles off the interstate on Highway 70. I’ve photographed the falls before but never at this time of year. In the heat of summer, the waterfall is usually not as impressive as it can be in the spring, but after that week’s strong storms with hard rains, I was hoping Fall Creek would be flowing fast as its cool water plunged to a deep pool 110 feet below the creek bed.

The mostly cloudy morning provided a natural diffuser for the sun high in the sky. Without the intermittent cloud cover, the full sun on the water would have rendered the scene too “contrasty” to be photographed successfully.

Driving in, I was optimistic that the cooperative weather would yield some nice shots. About a mile from the parking area, I noticed something else I hadn’t seen before: a historical marker bearing the name Thomas “Big Foot” Spencer. I turned the car around and went back to read it.

You see, I’m a descendant of Spencer’s brother, Isaac. I knew that Big Foot had been a legendary pioneer as the first Caucasian to clear land, build a cabin and grow corn in Middle Tennessee between 1778 and 1779. It’s documented that he spent that winter living in a hollowed-out sycamore tree near Castalian Springs at Bledsoe’s Lick. The marker explains that his towering stature and solitary life earned his nickname. I did not know that he was killed in an Indian ambush near this very spot in Crab Orchard in 1794.

Reading the marker, I began to think about that time in Tennessee history and about the tribes of Cherokee, Creek and Shawnee who once sheltered in the rockhouse formation along the trail to the base of Ozone Falls and hunted here for centuries before their lands were taken by white settlers.

My side trip had quickly become an introspective three hours as I photographed the same river and falls where so many have sought respite. I thought of my ancestor walking on the same sandstone bluffs, sitting beside Fall Creek and taking the same trail I was exploring to the falls.

It was a meaningful day to me that began as just a quick stop for photo or two. It just goes to show that you never know where you’ll find your roots.