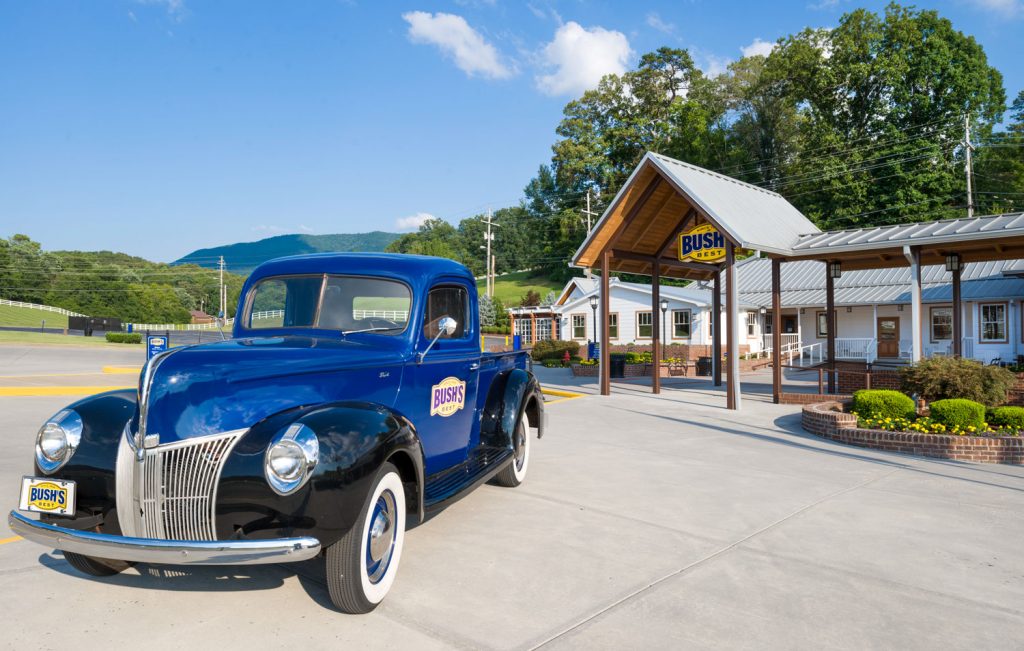 The Best They Can

The Bush Family Spills the Beans on Their Success

Bush’s Beans is all about the simple life, a little taste of good eating and a lot of family tradition.

When you enter the Bush’s Beans Visitor Center in Dandridge, expect to be greeted by smiling employees in their trademark Bush’s blue shirts emblazoned with the company logo. They’ll lead you through a panorama of history displays and posters that share fun facts.

Through the filmed story about the company, you’ll meet Duke, the lovable talking golden retriever who has become the face of the brand. Along with Jay, great-grandson of the company’s founder, the pair are recognized by people of all ages from their television commercials and print advertising.

Little did A.J. Bush know in 1904 that his name would become synonymous with beans — all kinds of beans. As an entrepreneur in the early 1900s, he aspired to run a hosiery mill. However, because of the fertile farmland in East Tennessee, he ended up partnering with the Stokely brothers and running a tomato-canning plant.

Canning vegetables since 1898, the four Stokelys needed a place to process their surplus tomato crops grown in Tennessee. So in 1904, they formed a partnership: A.J. built a canning plant in Chestnut Hill instead of his hosiery facility, and the Stokelys provided the canning equipment for A.J. to run the plant. Four years later, A.J. Bush bought out the Stokelys and later expanded the canning line to include local fruits and vegetables.

“That’s how Bush Brothers & Company was born in 1908,” says Scott Schroeder, general manager of Bush’s visitor center. “One of A.J.’s goals was to provide steady work to keep people of the area employed. That early plant canned more than tomatoes. Other vegetable and fruit crops also made their way through the Bush plant and onto the grocery shelves.”

Through World War I and the Great Depression, Bush kept the company going by canning food basics — such as sauerkraut and hominy — that were affordable staples. His sons joined the business, and by 1934, the company introduced pork and beans, another filling and inexpensive food.

“Bush’s Best Pork & Beans were served up to many of the American troops during World War II,” Schroeder says. “More than 20 years later, it became the foundation of our signature products.”

Expansion led to the opening of a canning facility in Augusta, Wisconsin, which it still operates. The company’s headquarters are now located in Knoxville, but the main canning plant still calls Chestnut Hill home. Its visitor center, located in the A.J. Bush & Company General Store, brings in more than 150,000 visitors annually to learn about the company and get inside information about the Bush’s Beans history and recipes.

In 1952, the company expanded its line to include variety beans. From black beans and black-eyed peas to butter beans and kidney beans, Bush’s Beans positioned itself to become known as a convenience food for busy cooks.

“Instead of soaking beans overnight in the home kitchen, cooks could simply open a can of ready-made beans as the basis of a one-dish meal or as a side dish,” he says. “It was an affordable and easy way to prepare a healthy meal without a lot of preparation time.”

In the late 1960s, A.J.’s son Cordon started tinkering with the company’s Pork and Beans recipe, trying to recreate a childhood favorite.

“He said his mom, Kathleen Bush, made the best baked beans, but for all his experimenting, he couldn’t replicate the recipe, so he finally did what he should have done in the first place,” he says. “He asked his mom for her secret recipe, on the condition that it would never be shared. Today, we still protect her formula for Bush’s Baked Beans.”

Step back into the early 1900s at the A.J. Bush & Co. General Store. As part of the Bush’s Beans Visitor Center, Museum and Café, the store transports visitors to simpler times, capturing the sense of family, community and values of the four generations of Bush descendants who today continue to be involved in the family-owned business.

A.J. Bush opened the general store in 1897 to provide the community with a nearby source for home essentials. It showed his entrepreneurial spirit nearly a decade before he purchased the canning plant he managed for the Stokely brothers in 1908.

“It was really the first store in the area, saving people from driving away to shop for common items,” says Susan Merrell, who has worked for the company for the past three decades. Originally hired as the assistant to A.J.’s grandson Condon Bush in the 1990s, she learned the story of the family-owned company and its members. “A.J. opened the store as his way of helping local residents in the community.”

A large sign atop the visitor center and museum marks the spot where the original store stood. Inside, the beadboard ceiling, wooden wall shelving and hardwood floors recreate the feel of the turn of the 1900s. Wood-and-glass-front display cabinets showcase the same types of goods that were sold at the time to the residents of Dandridge and the Chestnut Hill community.

“When I started here, it was a big part of my job to know the family,” says Merrell, who manages the museum and store, which opened in 2010. “It has always been my pleasure to be a part of Bush’s Beans. It just feels like family around here.”

It was to become Bush’s biggest ready-to-eat seller. Her recipe is the basis for the wide selection of Baked Beans products, including nearly 20 different varieties from Original to Brown Sugar Hickory.

As nutrition, culinary and health trends continue to evolve, Bush’s has responded by offering extra-spicy products and vegetarian selections plus gluten-free and reduced-sodium varieties.

The Bush’s Beans Visitor Center, located in the old general store from the late 1800s, has a museum where guests can become immersed in the life of Bush’s Beans. Walk through a gigantic replica of the Bush’s Baked Beans can that’s lined with video screens tracing the life of a Bush’s Bean from field to table. In the museum, visit the company’s timeline from the early 1900s to the present, including artifacts and items from across the years. Along the way, test your skills at trivia and fun facts revealed in the opening film.

Because of health and company regulations, visitors cannot actually tour the plant, but the film includes scenes of the growing, picking, processing and canning operations.

“Sweets are in big demand here, from our Smoky Mountain Hot Fudge Brownie Sundae to our specialty Bush’s Pinto Bean Pecan Pie,” Schroeder says. “You’ve got to taste it to believe it; it tastes just like pecan pie, and don’t forget to pick up a recipe card so you can make it at home.”

With more types of canned beans than you can count on all your fingers and toes, Bush’s Beans has held true to its basic philosophy from the beginning more than 115 years ago.

Deep-rooted traditions from the early days when A.J. Bush started the company have always been a part of the Bush’s Beans values. From supporting the local area and the community to choosing to keep its main plant in Chestnut Hill, those deep-rooted beliefs are still evident today.

“You know, we’ve always been mindful of where we started and the people of this area who helped us grow Bush’s Beans into what it is today,” Schroeder says. “But we’re not interested in blowing our own horn about it. A.J.’s outlook was to keep things simple, to stand on family values and provide a little bit of good eating. I think he’d be proud of what he started more than a century ago.”