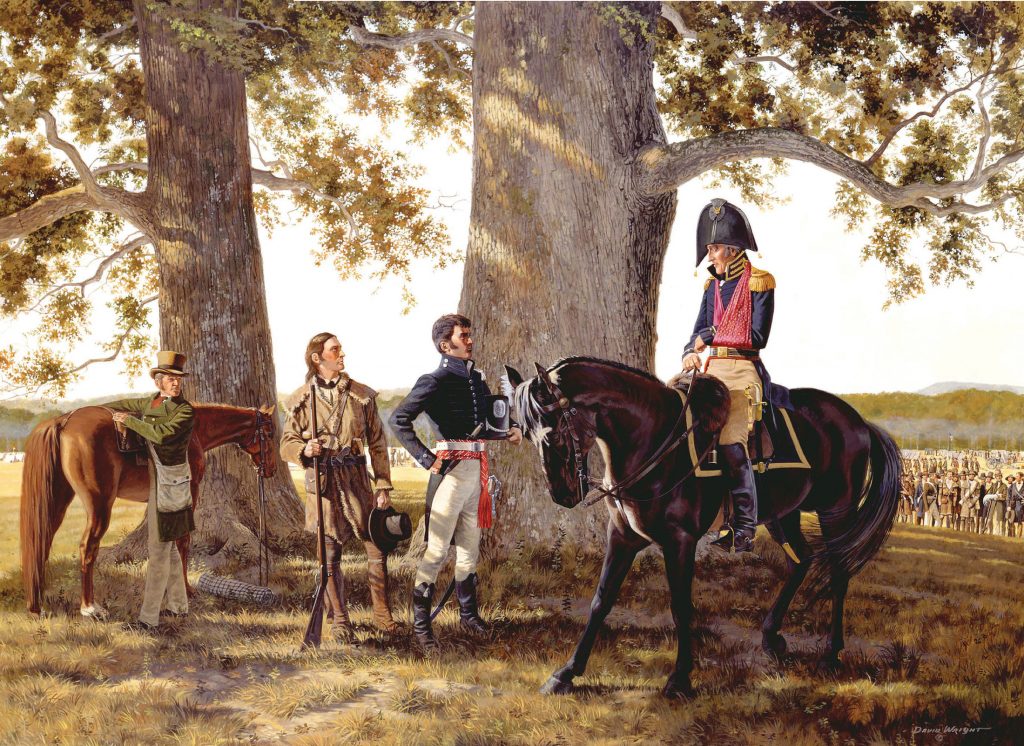 When several thousand volunteers were mustered by Gen. Andrew Jackson, head of the Tennessee State Militia, in what is now Fayetteville in the fall of 1813 to take part in the Creek War, they had no idea they were making history and that future Tennesseans would work to preserve the land on which they stood.

The term ‘Volunteer State’ was first used by a Nashville newspaper during the War of 1812 because of the incredible volunteer turnout for the Creek War and Battle of New Orleans.

But that’s exactly what has been happening since 2011. State and local officials as well as history buffs have worked to save from development the last 40 acres of what is estimated to have originally been around a 200-acre mustering ground.

The Creek War of 1813-1814, part of the larger conflict of the War of 1812, was a regional war involving warring Creek factions, the British who were trying to halt American expansion and the fledgling United States of America. The War of 1812 pitted the U.S. and its allies against the United Kingdom of Great Britain and Ireland over what the United States deemed an illegal naval blockade of Atlantic ports by Britain that prevented trade between the U.S. and France. To help man this blockade, Britain pressed merchant sailors, including Americans, into service in the Royal Navy.

When Art Meets History
In 1988, students of the advanced American history class at Lincoln County High School researched the history of Camp Blount and had a State Historical Marker erected near two ancient oak trees, the only remaining trees that dated to the time of the Tennessee Militia encampment with Gen. Andrew Jackson in 1813.

In 1999, nationally renowned artist H. David Wright was commissioned by the Lincoln County Historical Commission to paint the trees amid the setting of the gathering of militia. Set in a historical context with troops mustering at Camp Blount in the background, the painting portrays Fayetteville physician Dr. Charles McKinney, who ministered to the Tennessee troops during the Creek War along with Gen. Jackson, Ensign Sam Houston and Pvt. David Crockett.

Limited-edition prints were made of “Crossroads to Destiny,” and funds raised from their sale are used to sponsor history scholarships to students at Lincoln County High School.

Tensions already existed between the two countries before the declaration of war. A second front developed as European powers inserted themselves in the centuries-old conflict among Native American factions, arming tribes to raid American settlements on the frontier.

Among the eventual conflicts was a deadly attack on Fort Mims by a branch of the Creek tribe known as the Red Sticks north of present-day Mobile, Alabama, in what was then known as West Florida. During the attack, 250 fort in-habitants were killed and another 150 were wounded or captured. This was the impetus for the mustering of volunteers at Camp Blount.

The effort to have Camp Blount made into a state historic site and have interpretive exhibits for the public to learn about its place in Tennessee history was initiated by Fred Prouty of the Tennessee Wars Commission and then-Lincoln County Executive Jerry Mansfield.

Through state grants and local support, the land was purchased, and development plans are underway. Eventually, the Camp Blount Historic Site Association wants to provide a visitors center with a museum, gift shop and classroom; interpretive trails; a large pavilion; and the Volunteer Plaza, the centerpiece of which will be a bronze statue dedicated to an unknown volunteer. This unknown volunteer will be representative of the many from across Tennessee who answered the call to fight in the Creek War.

Wayne Hyde, the bronze artist who created the sculpture of Sam Houston in Maryville and the Lincoln Memorial statue in Knoxville, was commissioned to create the 8.5-foot statue of the Tennessee Volunteer.

“According to the state, there is no other statue in the state of Tennessee dedicated to the volunteer,” says Farris Beasley, co-chair of the Camp Blount Historic Site Association (CBHSA). “Now, there are a lot of statues of specific characters, but there’s not a statue just to an unknown early volunteer.

“That statue has been gone over by a panel of historians in the state, and, to the best of our knowledge, every piece of his equipment — arms, tomahawk, rifle — is historically correct.”

“Hat, boots, leggings, everything. They went over it with a fine-tooth comb,” says Randy Delap, chair of the association.

“What we’re promoting with the idea of the statue is that this is a tribute not only to the earliest Tennessee volunteer, but it honors all the volunteers from that time forward,” Beasley says. “And the reason we’re putting that statue up there is because we lay claim to being one of the earliest sites associated with the term ‘Volunteer State’ and ‘Tennessee Volunteer.’

“The term ‘Volunteer State’ was first used by a Nashville newspaper during the War of 1812 because of the turnout here and the turnout for the Battle of New Orleans. So we think we can lay claim to the fact that we have a little bit to do with the birth of the terms ‘Tennessee Volunteer’ and ‘Volunteer State.’ Not all of it, but we were certainly a big part of it. We were the biggest muster site of troops in Tennessee in the War of 1812.”

The reason the CBHSA was formed as a 501(c)(3) non-profit was so the group could apply for grants, according to Delap.

“When the state bought the property, one of the requirements was that someone in the city of Fayetteville was willing to do it and had to sign a maintenance agreement. But the municipality can’t really apply for grants (at the historic site), so that’s what we’re doing.”

Even before the actions to preserve the land commenced, Mansfield made early efforts to generate interest in the historical significance of the site. He challenged the local Advanced Placement history classes to do research on the site in the mid-1990s and petition the state to put up a historical marker. He also commissioned renowned historical painter David Wright of Gallatin, known for his attention to detail and dedication to accurately portraying history, to paint the site. The result was “Crossroads to Destiny” depicting a possible meeting of Gen. Andrew Jackson, Ensign Sam Houston, David Crockett and Dr. Charles McKinney, a local resident who treated Sam Houston after he was wounded at the Battle of Horseshoe Bend during the Tennessee Militia muster in October 1813 with the volunteer militia in the background.

“It has been a long haul to save that ground, so much of which has already fallen to commercial development with a shopping center covering most of the original camping field,” Wright says. “When I took on the commission in 1999, I found out that of the four trees still standing on the grounds that were there in 1813, two had already been removed by the 1990s by development. That’s why Jerry Mansfield commissioned the painting to include those two remaining oak trees. They are now gone due to the undercutting of the root system when a parking lot was done. Nothing is left except the acres saved.”

Preservation of the site was given a big boost by the bicentennial of the War of 1812 in 2012. Beasley was chair of the bicentennial committee, and after the commemoration, the historical association was started in 2016 with Delap as its chair. The state legislature and the CBHSA began working on getting the state to purchase the site.

“That was a long process because it was owned by a private individual,” Beasley says.

But the process was eventually successful in 2016 when the state was able to procure the last 40 acres of the original muster site.

In 2019, the CBHSA started getting engineering plans of what to do and conducted an archeological study to dig holes to search for graves and artifacts.

“Everything we do is under the direction of the Tennessee Historical Commission and the Tennessee Wars Commission,” Beasley says. “Everything gets cleared by them. It’s important if you’re doing a historic site to be absolutely correct, backed up by all the historical information you could possibly get to prove what you’re doing.”

Camp Blount is considered the second most important venue regarding the War of 1812 in the state of Tennessee, second only to the Hermitage, Andrew Jackson’s home.

That historical information includes the fact that Camp Blount was named after then-governor Willie Blount whose efforts to raise volunteers during the War of 1812 also helped lead Tennessee to become known as the Volunteer State. The campsite is also one of only a few War of 1812 sites in Tennessee, a state much more affiliated with its role in the Civil War. It was used as a muster site for both the Creek War and the Battle of New Orleans, which the British were heavily favored to win and did not.

“This little site was involved in the two major winning battles that turned the tide: the Battle of Horseshoe Bend and the Battle of New Orleans,” Beasley says. “We (Camp Blount) are considered the second most important venue regarding the War of 1812 in the state of Tennessee, second only to the Hermitage, Andrew Jackson’s home.”

“The groundbreaking (which occurred on Aug. 16) just made it really real to us that this thing was going to happen,” Beasley says.

“It’s going to be really nice for Fayetteville,” Delap adds.

Note: Interviews for this article were conducted by summer intern Nicole Christensen.