The Overlooked Matter of Race During the Suffrage Debate 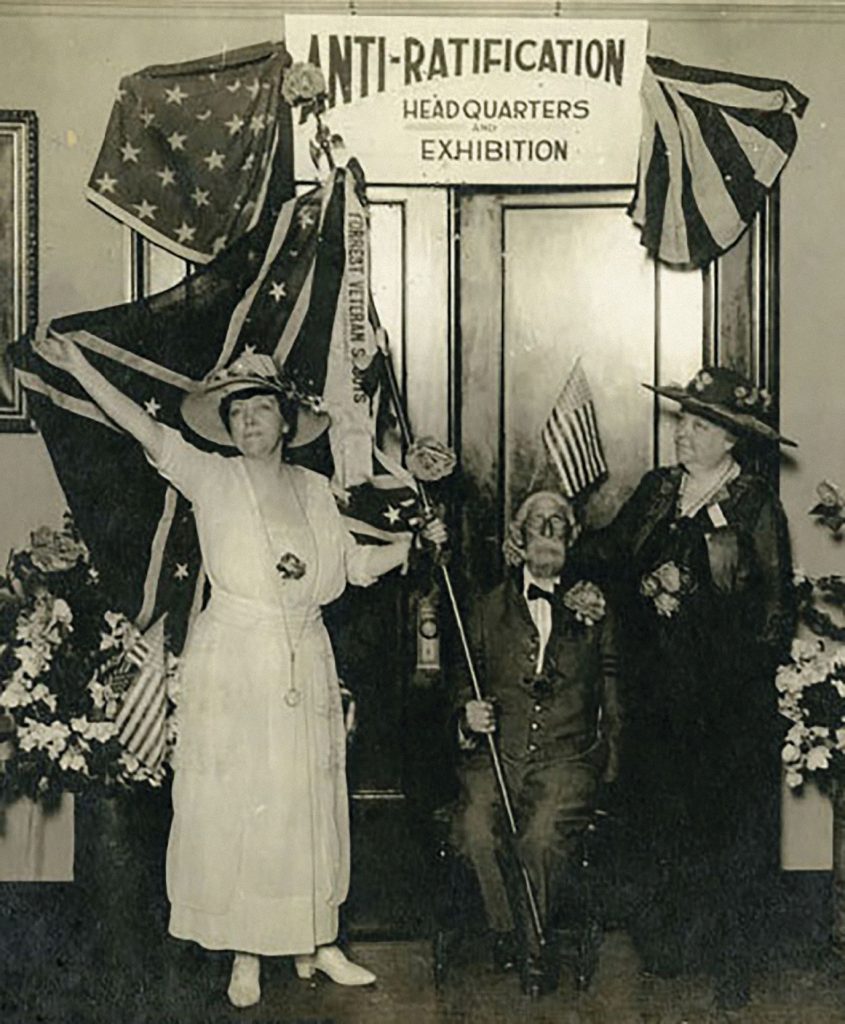 This photo was taken at the Hermitage Hotel in Nashville during the special session of the Tennessee General Assembly in August 1920. Josephine Pearson, a leader in the antisuffrage movement, is on the right. Her use of a Confederate veteran in the cause reminds us that there were many racial overtones to the antisuffrage movement.
Share
Facebook Twitter LinkedIn Pinterest Email

As Tennesseans prepare to celebrate the centennial of Tennessee’s critical passage of the suffrage amendment, they often don’t realize that the debate was heavily influenced by the matter of race.

To understand this rather awkward topic, you have to realize that 1920 was a different time in the South. A hundred years ago, racial segregation was required by law, the Ku Klux Klan was on the rise and interracial marriages were illegal in Tennessee.

In fact, one of the main arguments used against the suffrage amendment was that its passage would empower African Americans and reduce the power of white Southerners.

In response to this argument, suffrage leaders claimed in speeches and articles that most African Americans were not allowed to vote because of local prejudices, poll taxes and district geography. The 19th Amendment would do nothing to change that, they said.

The relationship between race and the woman suffrage movement dated back to Reconstruction. Early suffrage activists such as Susan B. Anthony and Elizabeth Cady Stanton originally wanted the 14th Amendment to guarantee voting rights for women as well as African-American men. It didn’t, however, which is why they helped form the National Woman Suffrage Association in 1869.

There were black women in the suffrage movement. One of the best known was Ida B. Wells, who left Memphis and moved to Chicago in the 1890s because of lynchings that were occurring in the South. In 1913, Wells was one of about 60 black women from Illinois who went to Washington, D.C., to take part in the suffrage parade the day before Woodrow Wilson’s inauguration.

The leaders of the parade asked these black women to march in the back of the parade so it wouldn’t upset the Southern women. Wells and her colleagues marched with the rest of the Illinois delegation anyway. The best-known African-American activist in the Tennessee suffrage movement was Nashville native J. Frankie Pierce. When the Tennessee League of Women Voters had its first convention in May 1920, she was asked to make a speech in the Tennessee State Capitol.

“What will the negro woman do with the vote?” she asked that day. “We will stand by the white women. We are optimistic because we have faith in the best white women of the country, of Nashville. We are going to make you proud of us because we are going to help you help us and ourselves.”

The idea that the suffrage amendment would help African Americans was repeatedly used by opponents of the woman’s suffrage movement. During the Tennessee General Assembly’s special session in August 1920, forces opposed to the 19th Amendment published a large newspaper advertisement headlined with the words, “The Truth about the Negro Problem.”

“For the sake of Southern civilization, for the sake of womanhood and for the sake of the welfare of the negro race as well as the white race, the Susan B. Anthony amendment should be defeated,” began the long ad. Later it proclaimed that “the better class of NEGROES THEMSELVES know that they are better represented by able white men than they would be by designing politicians of their own race, just as the majority of the women themselves feel they are better represented by the fathers of their children than they would be by politically ambitious officeseekers of their own sex.”

The best-known example of this was on Aug. 14, 1920. During one of the long, bitter debates on the suffrage amendment at the Tennessee State Capitol, State Sen. Hershel Candler of McMinn County denounced Catt as an “anarchist” on the floor of the state senate. While some members of the senate hissed, Candler said, “(Catt) would be glad to see the day when negro men could marry white women without being socially ostracized. This is the kind of woman who is trying to dictate to us. They would drag the womanhood of Tennessee down to the level of the negro woman.”

A few hours later, Catt responded to the accusations. “It is an absolute fabrication that I have at any time advocated intermarriage between the white and negro races,” she wrote. “Furthermore, I believe it to be an absolute crime against nature.”

It was in this context that the debate over woman suffrage waged 100 years ago. And it goes without saying that there were no African-American women at the Tennessee State Capitol during the special session. J. Frankie Pierce, who had made a speech in the State House Chamber only a few months earlier, was asked not to come to the Capitol. To this day, we don’t know how or when it was that she and other African-American suffrage activists first got the news that the Tennessee General Assembly passed the 19th Amendment.