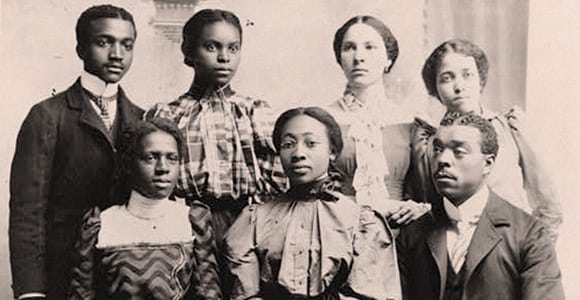 Events, institutions and even towns are sometimes erased so completely that there is nothing left of them. In Nashville there is no better example of this phenomenon than Roger Williams University — the African-American school that used to be where Vanderbilt’s Peabody campus is today.

During the Civil War a white abolitionist named Dan Phillips came to Nashville intending to start a school for black preachers. By 1866, with the financial support of philanthropic Northerners, he started a school near Fisk University called the Nashville Normal and Theological Institute. The school moved several times and eventually fell under the sponsorship of the American Baptist Home Mission Society (a division of a Northern Baptist denomination). In 1874, while Vanderbilt University was under construction, Phillips raised $30,000 from one of his former classmates at Brown University and bought a 30-acre tract and three-story mansion on Nashville’s Hillsboro Road.

After the school moved to the site, it added another floor and two wings to the mansion, creating a large, multipurpose structure. The trustees renamed the institution after Roger Williams, the founder of Rhode Island.

In the 1880s and 1890s, Roger Williams University had about a dozen teachers and 250 students, most of whom were black and a third of whom were women. In an era when most blacks were former slaves and none had access to public schools, the institution didn’t have the luxury of admission standards or extremely specialized curricula. Roger Williams taught everything from reading to carpentry to algebra. But it did specialize in the training of black preachers, many of whom went every Sunday to preach at local churches or at the state prison. “I never in my life have witnessed more manifest and more cheering signs of the power of the gospel” than through the work of the school, Phillips once said.

Even though not everyone in the surrounding area was thrilled about the presence of an African-American college, the relationship with Vanderbilt was cordial, at least according to one Roger Williams professor. “Vanderbilt football coaches coached the Negro team,” he recalled in the 1930s. “Roger Williams students went to games at Vanderbilt and sat with the others on the bleachers — a practice which would not be allowed today. Individual students, white and black, formed friendships that outlasted school days.”

However, the presence of a black school in what was an increasingly affluent part of Nashville eventually became awkward. Starting in 1891, there were frequent offers from white developers to buy the campus. The Roger Williams trustees turned them down.

Eventually, acts of vandalism and even violence began taking place. In 1903 a bullet flew through the chapel window during music rehearsal. On Christmas Day 1904, someone fired into the home of the school’s president, Peter Guernsey, wounding his wife.

At 7 p.m. on Jan. 24, 1905, most of Roger Williams’ students were attending a prayer meeting in the chapel of the school’s main structure, known as Centennial Hall. A Roger Williams student was returning from his job as a waiter at Vanderbilt when he saw flames on the roof of a building. As the students rushed out of the structure, “the screams of girls and the calls for help by the 140 boys were distinctly heard all over West End,” according to the account of the fire in the Nashville American.

There was little that anyone could do; at that time the campus was outside the city limits, and firemen could not get water to the site via hoses. Everyone present formed a bucket brigade that kept the fire from spreading to the building’s two wings. But by the next morning Centennial Hall was destroyed, along with the entire science library and the personal possessions of 160 male students.

The next day, one of the coldest in Nashville history, it was hard for anyone to imagine the school returning to operation. “The campus was covered in ash and debris from the conflagration,” the American reported. “Around the residences of Guernsey and (school) treasurer Owen, groups of students stood with quilts and blankets wrapped around them waiting for orders and money from the officers that they might return home or look for a permanent place to live.” Many students found shelter in nearby homes, and classes resumed in a week.

The next few months brought conflicting reports as to whether the structure would be rebuilt or the school moved elsewhere. Then, on March 19, the American reported that a local real estate company was on the verge of buying the campus and subdividing it for residences — much like other sections of that part of town were being divided and developed. Roger Williams officials apparently turned down the offer.

Then, on May 22, another part of Roger Williams’ main building — the original Gordon mansion, which by this time had been converted into a female dormitory — burned down. Once again, people could do little to stop the fire because of a lack of running water outside of incorporated Nashville. But this time, arson was publicly recognized as a possible cause. According to a story in the American later that week, the only person sleeping in the building that night was a male student (most of the students had already gone home for the summer). After he went to bed, “he heard a noise from the first floor, as if someone was falling over furniture. Hearing nothing further, he went to sleep, to be wakened an hour later by cries of fire.” Among the valuables that were lost in the second fire were 6,000 books, two organs and a piano.

No one ever proved that the second fire was set by an arsonist. A few days after the May blaze, Guernsey said that despite the two fires and the acts of terror, most Nashville residents still treated the school well. “Prominent citizens, both ladies and gentlemen, have frequently gone out of their way to compliment me on the good behavior of our students and have called upon me at my home to express personal sympathy and regret,” he said. “If it should develop that the fire was incendiary, it would prove to be, I am sure, the work of some drunken tramp or a dare-devil or the work of some hare-brained miscreant with a mania for destroying school property in general.”

It should also be pointed out that, during this era, horrible fires were not uncommon. In May of that same year, Vanderbilt’s main building — then known as College Hall — also burned to the ground. No one ever proved what caused that fire, either.

However, the second fire did turn out to be the last straw for Roger Williams University; the school hired a Nashville developer to subdivide the land and sell its lots. Before this process took place, the developer became aware of the possibility that the entire tract might be sold to Peabody Normal College, which was looking for a new campus to replace the one south of downtown. In October 1910 he sold about 25 acres of the Roger Williams site to the Peabody trustees for $170,000.

By this time, the American Baptist Home Mission Society had agreed to donate $20,000 toward the construction of a new campus. The institution moved to a 12-acre site on Nashville’s White’s Creek Pike. It remained there for another 20 years, when it moved to Memphis and merged with Howe Junior College (later LeMoyne-Owen College).

Peabody Normal College eventually became George Peabody School for Teachers, which in the 1970s was taken over by Vanderbilt University. Today, it is safe to say that few, if any, of the Vanderbilt students are aware that their “Peabody campus” was once the site of an African-American institution. “There is a historical marker, but I don’t think the campus tour guides have it as part of their spiel,” says Eugene TeSelle, a retired Vanderbilt divinity professor who has extensively researched the history of Roger Williams University.