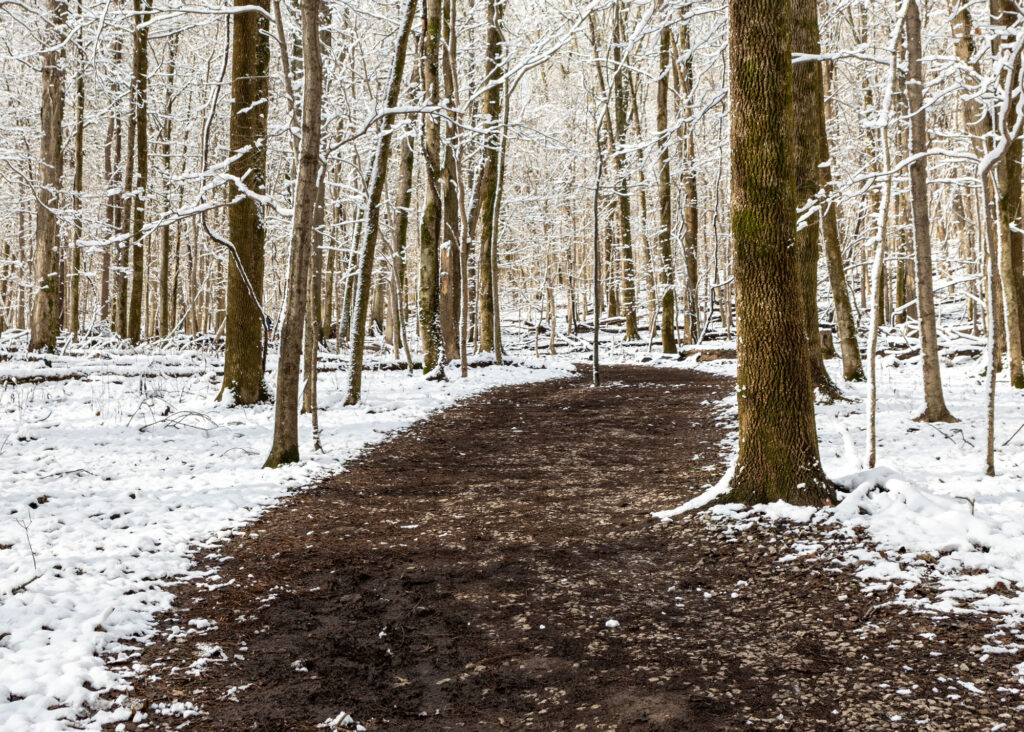 If you’ve been following our series of features on Tennessee’s state parks, you already know that the park system provides a lot of enjoyment to a lot of people — an invaluable service during difficult, uncertain times and a respite from the worries and stresses of everyday life. It stands to reason, then, that keeping the parks going and continuing to innovate take a lot of work. Recently, some of that dedication and hard work by park employees was recognized with well-deserved awards.

Go Green With Us

Tennessee State Parks has received the President’s Award from the National Association of State Park Directors (NASPD) recognizing the parks for their work in sustainability with the Go Green With Us initiative.

The award is given to an individual or organization that has made an extraordinary contribution, innovation and/or best practice at a state, regional or national level furthering the goal of a state parks system.

Greer Tidwell, deputy commissioner of the Tennessee Department of Environment and Conservation, and Mike Robertson, director of operations for Tennessee State Parks, accepted the President’s Award at the NASPD national conference in Sunriver, Oregon, in early September.

“We are very grateful to the NASPD for honoring Tennessee State Parks,” says Tidwell. “The teams at our parks show commitment to sustainability practices every day and are worthy of this honor. We look forward to such commitment well into the future.”

Go Green With Us was created in 2015 as a partnership among Tennessee State Parks and citizens to help protect and preserve the parks through conservation, sustainable operations and recycling. The program not only implements sustainable practices throughout park operations but also provides sustainable options for park guests such as recycling, water bottle filling stations, Earth-friendly merchandise and environmentally friendly lodging and recreational opportunities. 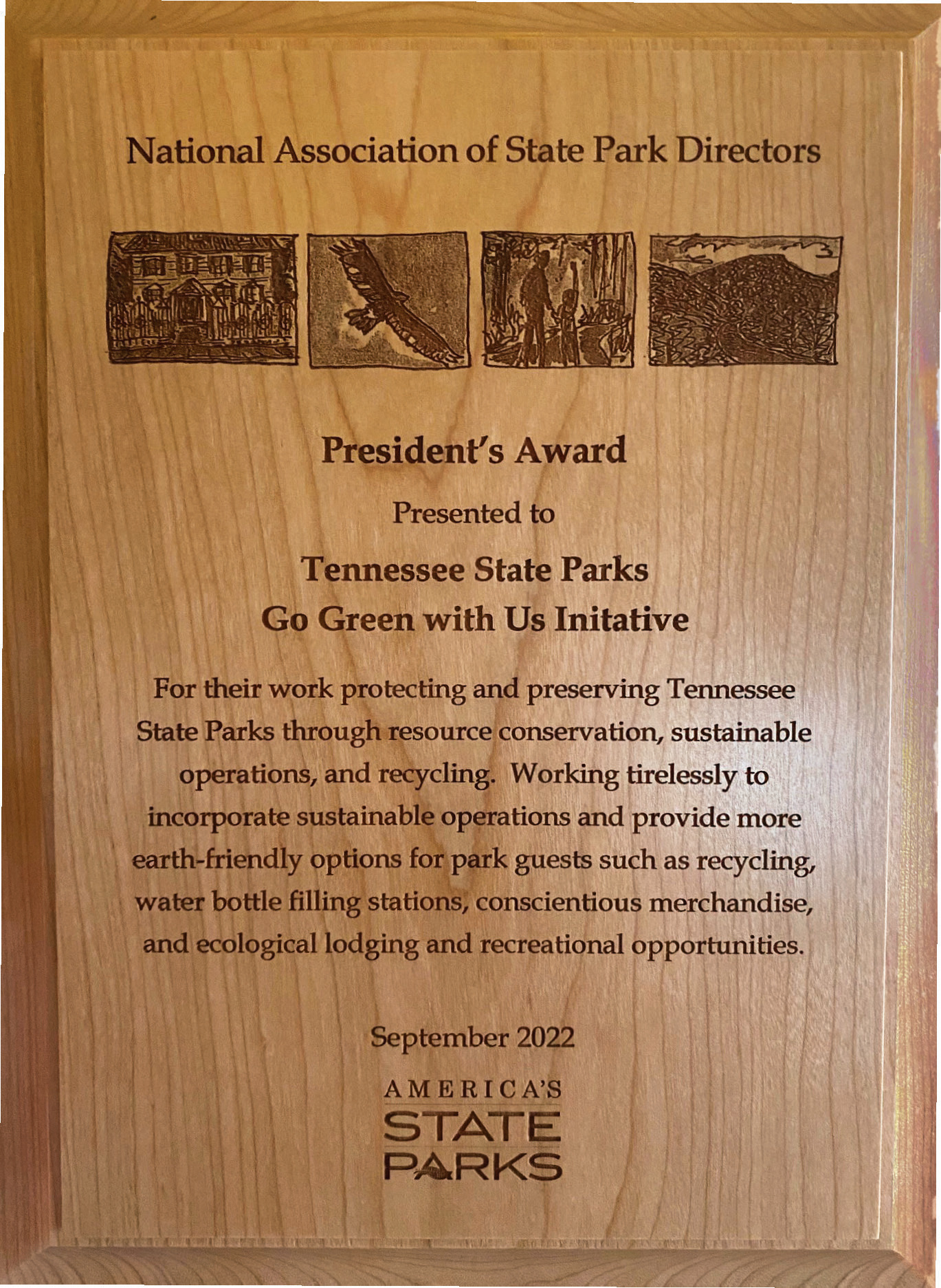 Before the program launch, a Go Green With Us Committee was formed of representatives from Tennessee State Parks and other divisions within the Tennessee Department of Environment and Conservation (TDEC). This committee compiled a comprehensive guide to outline the many actions staff and visitors can take to effectively incorporate environmental sustainability into all aspects of park operations. In the first year the Go Green guidelines were launched, it was a voluntary program. Each park has a designated Go Green representative who is responsible for coordinating the park’s implementation of the guidelines and reporting progress. Robin Peeler, East Tennessee park area manager, and Kelsey Davis, environmental consultant for the Office of Sustainable Practices at TDEC, are co-managers of the Go Green With Us program. As of October 2018, the implementation of the Go Green guidelines became mandatory for all parks. They are required to execute the basic prerequisites in each category for the items that apply to the park.

The Go Green With Us program uses nine metrics for evaluation of the 56 state parks. Through this evaluation process, the parks can earn Bronze, Silver, Gold or Platinum recognition levels. Parks accumulate points for providing various green-friendly programs and information as well as completing certain tasks. For instance, repurposing materials such as using scrap lumber for bird feeder craft projects earns a park one point. Installing solar lights or other solar-powered mechanisms earns two points. Earning and maintaining TVA Clean Marina certification earns three points. The points system is extensive and touches every aspect of park operations from maintenance to guest services, from historic preservation to transportation, and much more.

In the first year of the program, no park reached Platinum, and only three parks reached Gold. Only five years later, however, a lot of hard work and promotion of the program led to 22 parks reaching Gold and 28 reaching Platinum levels.

The program has had a significant impact with regards to environmental stewardship and reducing the parks’ carbon footprint. In 2021, a total of 394 tons of material was recovered and recycled across the 56-park system. Fifty-five of the parks had replaced plumbing fixtures with low-flow alternatives and installed LED lights in high-traffic areas. Four parks composted more than 8.6 tons of food waste. All the parks reduce carbon emissions by having a no-idle policy, and 53 use alternative patrols for rangers. Every park tracks rare, threatened and endangered species and actively works to remove invasive species. Most of the parks also plant native species in landscaping.

Through fiscal year 2021, the energy efficiency upgrades alone have saved $1.8 million, more than 18 million kilowatt-hours of electricity and 14,576 tons of carbon dioxide emissions. And that’s just one slice of a large pie of overall positive outcomes from the Go Green With Us program.

“We also have a ‘Wildcard’ option where parks can get additional points for items that go above and beyond or that were not listed in the guidelines,” says Kim Schofinski, deputy communications director for TDEC.

A few examples of Wildcards over the years include:

It’s good to see such a collection of hard work and a wide-reaching and impactful program recognized nationally.

“This award recognizes the importance of sustainability and the work that goes into it in our parks,” says Robertson. “The Go Green With Us program is a valuable service to Tennesseans, and we are honored that our parks have been recognized by such a prestigious organization.”

One of the items of modern life that poses significant problems when it comes to disposal is the tire. Not only are tires unsightly and breeding grounds for pests like mosquitoes, they also can release harmful chemicals into the air and groundwater and don’t decompose. Close to 300 million scrap tires are generated in the United States each year.

Thus, finding uses for these tires that are no longer fit for the road is imperative. Tennessee State Parks were recently recognized for contributing to that effort. The system was honored with the Project Excellence Award from the Society of Outdoor Recreation Professionals for the innovative Tires to Trails program, which recycles tires. The award was presented in September at the National Outdoor Recreation Conference in Knoxville.

“This is a wonderful recognition of an outstanding program,” says David Salyers, commissioner of the Tennessee Department of Environment and Conservation. “We have seen great success with Tires to Trails, and the award is a tribute to all who have worked to make it successful.”

The award is presented annually to exemplary outdoor recreation projects and collaborating agencies and organizations that were keys to the success. Selection criteria include unique or special circumstances, problem-solving, level of innovation and creativity, impact or effect of a project and collaborative team effort.

Tennessee State Parks officials, along with those from the Tennessee Department of Transportation, cut the ribbon in June on a new hard-surface pathway over 2.5 miles long—made from rubber crumbs derived from tires — at T.O. Fuller State Park in Memphis. The path is one of the longest rubber-bearing trails in the U.S. The project was a partnership among TDEC, TDOT, the city of Memphis, Shelby County and Memphis City Beautiful.

Tires that had been illegally dumped in the area around the park were gathered by volunteers and local contractors, then transformed into crumbs by Patriot Tire Recycling in Bristol, the only facility in the state with the ability to recycle tires in such a way. Once the tires were recycled into crumbs, the material was taken back to the park for construction of the trail.

Workers cleaned up more than 24,000 dumped tires, including passenger, commercial truck and heavy equipment tires. The cleanup had 450 registered volunteers and saw 10,000 tires collected in one day. The project, which began with collection in 2019, was funded by a Tire Environmental Act Program grant of $250,000 from TDEC’s Office of Policy and Sustainable Practices, a special litter grant of $200,000 from TDOT and a Federal Highway-Recreational Trails Program grant of $280,000 from TDEC’s Division of Recreation Resources.

“We are using flexible, porous pavement made from recycled tires in other Tennessee State Parks,” says TDEC’s Schofinski. “The project at T.O. Fuller State Park was the first of its kind, and we hope to replicate it in other locations. Bringing communities high-quality recreational opportunities is one of the major goals of Tennessee State Parks and Tires to Trails.”

While a trip to one of Tennessee’s state parks might automatically bring warm-weather images to mind, there’s a beauty and peaceful quiet that comes from the less-crowded winter visits. The parks still offer plenty of programs and special events in the colder months. Here is a sampling:

Dec. 2–3 • Christmas at the Carter Mansion, Sycamore Shoals State Park — Step into the traditions of a circa 1780 Colonial Christmas at this historic home.

Dec. 3 • Christmas Garrison, Fort Loudoun State Park, 10 a.m.-4:30 p.m., 6–7 p.m. — Celebrate Christmas as the soldiers did during the French and Indian War. Demonstrations throughout the day will feature blacksmithing, laundering, cooking and artillery drills. There will also be a Christmas church service and wassail tasting. The candlelight tour of the fort begins at 6 p.m.

Jan. 15 • Geocaching and S’mores, Hiwassee/Ocoee Scenic River — Learn to use your smartphone or GPS device to find geocaches (hidden treasures), then enjoy some yummy s’mores by the campfire.

Feb. 25 • Maker Market and Craft Fair, Bledsoe Creek State Park, 10 a.m.–2 p.m. — Bundle up and enjoy seeing what the 35 vendors have to offer. Food trucks will be on site to provide breakfast, brunch and lunch.

The Tennessee Running Tour continues through the winter months. This is the 44th year of the longest state parks running series in the country. Twenty different races are held at state parks beginning in October and lasting until early March. Visit tennesseerunningtour.com to find out about times, locations, fees and more.

For a fuller listing of events and programs being held at state parks across the state, visit tnstateparks.com/events. Check back often as these are frequently updated as dates draw nearer. You’ll also find information about any related fees or requirements for specific programs.