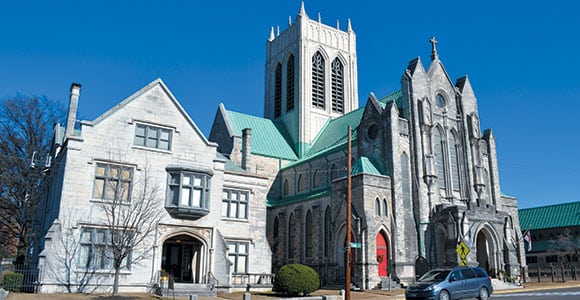 Sister Constance and her companions remembered for their service during epidemic

If I were to ask you to imagine a hero who kept on facing death every day, you would probably visualize a war hero or pioneer.

Among the heroes were several Episcopal nuns. Knowing they might not survive, these ladies visited homes in which people were dying of yellow fever during the months of August and September 1878. They nursed the sick; they helped care for orphans; they tried to help arrange for the deceased; they wrote letters asking people around the country to send help.

Best known of these was Sister Constance, who was born in Massachusetts in 1846 under the name Caroline Louise Darling. By 1878, Constance was the headmistress of St. Mary’s School for Girls in Memphis. In August of that year, she and another St. Mary’s nun, Sister Thecla, were spending the summer in upstate New York when they heard the epidemic had struck Memphis. At a time when thousands of Memphis residents were fleeing, Sisters Constance and Thecla went back into the city to join other Episcopal priests and nuns who were already going from home to home, caring for the sick.

When the sisters got back to Memphis, about 10 people were dying per day, and all of the hospitals were filled to capacity. Most of the people who got yellow fever were confined to their homes with a sign on their front doors indicating the presence of the plague. Doctors and volunteer nurses such as Sisters Constance and Thecla went door-to-door, administering help to those who were sick and dying, making arrangements for the dead and finding places for those left behind (especially orphaned children) to live.

“In house after house the Sisters found victims alone and unconscious, without medical or nursing attendance,” according to an account of the history of St. Mary’s written in 1965. At one house, for instance, Sister Constance found a “pretty young girl in mourning, one corpse on the sofa, another on the bed, and a delirious, nearly naked young man rocking himself back and forth in his great agony, in an atmosphere so horrible that the Sister was sickened.”

Unlike the strain of yellow fever that had attacked Memphis five years earlier, this disease moved fast. A person might feel fine on Friday, become violently ill on Saturday and die on Sunday. There was no known cure or vaccine. People either died or survived their encounter with the disease, and doctors and nurses could only comfort the suffering as best they could with no painkillers at their disposal. Among the symptoms were fevers, chills, a yellowing of the skin and black vomit.

Accounts of the epidemic also report how, in the end, people became uncontrollable. “People ran yellow eyed and delirious into the streets, screamed and thrashed and had to be physically restrained,” Molly Crosby wrote in her 2006 book “The American Plague.”

By Aug. 30, the death rate reached 70 in one day, a time by which the fever had begun to take its toll on those trying to help. Four Catholic priests had died by the next day, and Charles Parsons, rector of Grace Episcopal Church, had come down with the disease. On Sept. 5, Sister Constance calmly told her colleagues that she felt like she had a fever coming on but refused to lie on a comfortable mattress since she knew it would have to be burned once she used it. Only minutes later, Sister Thecla admitted that she, too, was sick.

Parsons died on Nov. 6 and Constance on the 9th. Thecla appeared to have survived her illness, but then she suffered a relapse and died on the 12th.

According to a church history, no fewer than 30 Episcopal priests from all over the nation volunteered to go to Memphis and take Parsons’ place. One who did was Rev. Louis Schuyler of Hoboken, N.J., who arrived just in time to see Constance and Thecla die from fever. However, only a week after he got to Memphis, Schuyler died from the fever as well. Three days later came the death of Dr. Will Armstrong, a well-known Memphis physician who had made house calls around the clock since the outbreak of the epidemic.

Today, we know that yellow fever is spread by mosquitoes. But in 1878 Memphis, people had no idea what caused the epidemic; local authorities tried everything from covering the streets with lime to setting off explosives to stop its spread. It is easy to understand, though not to sympathize with, someone who panicked when members of his family fell ill. “A man on Poplar Street yesterday cowardly deserted his wife and his little daughter, both of whom were ill with the fever,” the Memphis Appeal reported on Sept. 6. “If he isn’t dead, somebody ought to kill him.”

The death rate decreased by the end of September, but people were still dying of yellow fever with regularity until a hard frost arrived in late October. By that time, more than 17,000 people had caught the fever, and more than 5,000 of them had died.

We now know that the fever originated in Western Africa, which is why, in 1878 Memphis, African-Americans, having inherited some immunity to the virus, proved far more likely to survive yellow fever than European whites. About 70 percent of the 6,000 whites who stayed in the city died of yellow fever. But only about 7 percent of the 14,000 blacks who stayed in Memphis died.

Today there are a few monuments in Memphis to the heroes of the yellow fever epidemic. The most notable is in Martyrs Park, where a plaque says that “citizens of all races and walks of life, recognizing their common plight in this devastated, bankrupt community, tended 17,600 sick and buried the dead. As a result many of them lost their lives, becoming martyrs in their service to mankind.”

“Constance and her Companions,” as they are known, are honored every Sept. 9 by the Episcopal Church.

There is one recent postscript to this story. Sisters Constance and Thecla, along with two of their fellow nuns who died tending the sick, were buried at Elmwood Cemetery. The four nuns were given one tombstone, their graves in the shape of a cross.

As the years passed, inches of silt, dust and blowing topsoil buried the limestone curbs that reflected the arrangement of their coffins. Last year, a grave restorer named Mark Henderson rediscovered the stones and returned them to their original appearance. “I think it gives everyone a true vision of what the beautiful grave was meant to convey,” Henderson says.