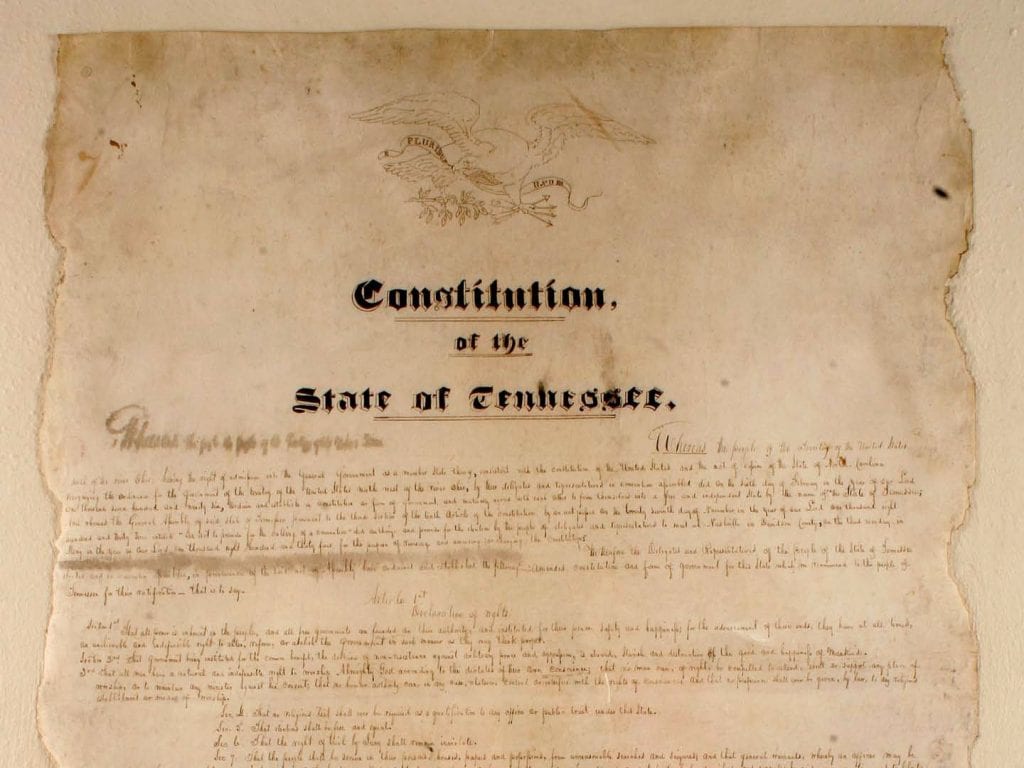 There aren’t many Tennessee laws that address social studies standards. One of the few that does requires teachers to explain that Tennessee has had three different constitutions and how changes have been made to the Tennessee Constitution of 1870 in the last century and a half. Using legal terminology, the law is Tennessee Code Annotated 49-6-1028.

To be honest, I didn’t feel like I knew this topic well, so I researched it. Some of what I discovered came as a surprise.

First of all, I suspect most people don’t know why Tennessee had the 1870 Constitutional Convention in the first place. Yes, it had something to do with the Civil War. However, Tennessee outlawed slavery and passed the 13th Amendment in 1865 and was readmitted to the Union in 1866. The federal government didn’t require Tennessee to rewrite its constitution because of the war.

According to Lewis Laska’s book “The Tennessee Constitution,” the way the state was governed in the years during and immediately after the Civil War convinced most Tennesseans that a new constitution was necessary. Tennessee’s chief executive from 1862 to 1865 was military governor Andrew Johnson; his successor was the even more unpopular William Brownlow. More than any other governor in the state’s history, Brownlow ran Tennessee like it was a dictatorship. “The Brownlow regime brought a period of vengefulness, incompetence and corruption to the state,” Laska writes. “Brownlow used the militia as a tool of oppression, suspended the writ of habeas corpus, mismanaged the state’s finances and saddled the state with debt.”

Perhaps the most controversial thing Johnson and Brownlow did was to require everyone to swear to a 161-word oath in order to vote. Not only did the oath force the prospective voter to swear that he was an “active friend of the government of the United States,” it also required him to say that he “sincerely rejoice(s) in the triumph of its armies and navies in the defeat and overthrow of the so-called Confederate States.”

This requirement, Laska points out, “meant that only Union loyalists and liars” could vote in Tennessee in the mid-to late 1860s. In 1865, for instance, only 21,144 Tennesseans cast ballots in the statewide referendum over slavery — about one-seventh the turnout in the 1860 presidential race.

By the time Brownlow left office in 1869, many people regarded as invalid just about anything state government had done in the previous first few years following the war.

In 1869, under a new governor, Dewitt Senter, the General Assembly called a statewide referendum on whether there would be a constitutional convention. The measure passed, and 69 delegates were elected from across the state.

The convention met in Nashville during the first few months of 1870. Here are some of the points I find especially interesting about the constitution they wrote:

The new constitution was approved by a vote of about 100,000 to 30,000 on March 21, 1870. It remained unchanged for 83 years but has been amended several times in the last three-quarters of a century — sometimes via constitutional convention and sometimes via referendum.

In 1953, for instance, a constitutional convention changed the term of the governor from two to four years and got rid of the clause that allowed for a poll tax.

In 1977, another constitutional convention got rid of the clauses banning interracial schools and interracial marriage as well as the item that limited loan interest at 10 percent (the so-called “usury clause”).

In 2002, voters decided by referendum to get rid of the constitution’s ban on lotteries.

In any case, I hope all this information helps teachers and students realize that the Tennessee Constitution is not set in stone. It is a living, changeable document with a story behind every item and clause.