Fact and fable on the frontier 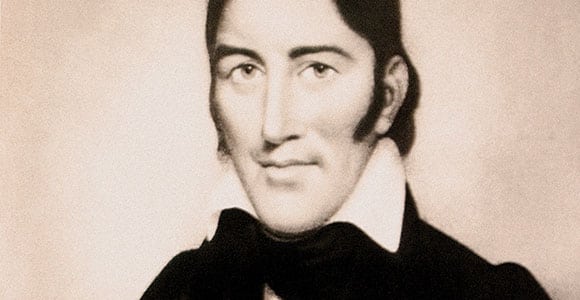 Like many people of my generation, I grew up aware of the legend of David Crockett. I saw the Walt Disney movie and the television show. I may have even had a fake coonskin cap.

I have also become aware that there are monuments to Crockett from one end of Tennessee to the other. But I had never read a biography of the man until recently, when I read a recent one by Michael Wallis, “David Crockett: The Lion of the West,” and Crockett’s autobiography, published only two years before he died.

The main thing I wanted to know was: “Why is this man so famous?” And here are some things I learned:

Today, people often refer to this man as “Davy” Crockett, but he never signed his name that way. The reason we call him “Davy” is because of a song written in the 1950s, a time when there was a national craze for all things Crockett.

David Crockett is one of the most famous people to ever come from Tennessee. But he was never the president, never the governor and never a general. The highest political rank Crockett achieved was as a member of the U.S. House of Representatives, where he represented West Tennessee.

Crockett’s father, John Crockett, was not a good provider. At one point, John “leased” David to another man to help pay his debts (a practice not uncommon at that time). The closest thing to a father figure for David Crockett appears to have been John Canaday. Canaday, a Quaker, ran a farm in what is now Hamblen County. Crockett worked and lived with him from the time he was 16 until he was about 19. It was under his tutelage that Crockett found time to learn to read and write.

Probably because he was so poor, David Crockett was not always successful with the girls. In his autobiography he describes two instances where he fell in love only to end up with a broken heart. One of them was with a girl named Margaret Elder, who married someone else even after Crockett had obtained a marriage license. “My heart was bruised, and my spirits were broken down,” he wrote. “So I bid her farewell, and turned my lonesome and miserable steps back again homeward, concluding that I was only born for hardships, misery and disappointment.”

Crockett was restless, to say the least. He was born along the Nolichucky River (in present-day Greene County), and his father moved his family to a tavern (in Hamblen County). He spent about three years as a teenager roaming and living alone in various parts of Virginia. As an adult, David Crockett lived in what is now Jefferson, Lincoln, Franklin, Lawrence and Gibson counties of Tennessee.

Crockett twice volunteered to fight in the Creek Wars. He proved valuable to his comrades as a scout and hunter, and he also saw combat. At one point he watched about 50 Creek warriors burned to death in a house from where they were fighting. But as fate would have it, Crockett missed both the Battle of Horseshoe Bend and the Battle of New Orleans.

Crockett married twice. His first marriage, to Polly Finley, bore three children. She died shortly after he got back from the Creek Wars and is buried in Franklin County. A few months later Crockett married a woman named Elizabeth Patton. David and Elizabeth had three more children but do not appear to have had a close marriage as he was almost always away hunting or in Congress.

After he remarried, Crockett set off on a hunting trip with some friends to what is now Alabama. After they got separated, Crockett contracted malaria and couldn’t walk because he was so sick. Fortunately he was rescued by some Choctaw Indians who took him to a cabin where he was nursed back to health. By the time Crockett made it back to his cabin in Tennessee, his wife Elizabeth believed him to be dead.

Like his father, Crockett was a failure as a businessman. One of his schemes was a mill, distillery and gunpowder factory in Lawrence County. That venture failed when Shoal Creek flooded. A few years later, in Gibson County, Crockett went into the timber business. The plan was to chop down hundreds of trees, cut them into staves, float them down the Obion and Mississippi rivers and sell them in New Orleans. Unfortunately, the flatboats on which Crockett was delivering his timber harvest capsized in the Mississippi, and he nearly drowned.

When he was originally elected to Congress, Crockett was an ally of Andrew Jackson. But he broke with Jackson and was the only Tennessee representative who voted against the Indian Removal Act in 1830. From this point onward, Jackson and Crockett were political enemies.

Crockett originally became famous because of stories he would tell to other representatives and reporters about hunting for bears, fighting in the Creek War, floating down the Mississippi and other things. Reporters wrote articles about him, and he became one of the best-known personalities in what was then known as the West.

In 1831 a play called “The Lion of the West” became a hit in New York. Its main character, Colonel Nimrod Wildfire, was a storyteller wearing a buckskin shirt and coonskin cap, clearly based on David Crockett. This play made Crockett even more famous and resulted in the publication of a biography of him that he didn’t write, had nothing to do with and made no money from.

Crockett’s best friend in Congress was Thomas Chilton of Kentucky, who broke with President Jackson in much the same way Crockett had. Chilton ghost-wrote Crockett’s best-selling 1834 autobiography “A Narrative of the Life of David Crockett of the State of Tennessee.” It is hard to know how accurate this book is, especially since Crockett had a tendency to stretch the truth in stories. He claims to have killed more than 100 bears in a seven-month span in West Tennessee, for instance. But Crockett’s humor comes through in his autobiography. He mentions a woman he met who was “well enough to smartness, but she was as ugly as a stone fence.” He admits that as the years passed, he was “better at increasing my family than my fortune.” And speeches in Congress, Crockett says, are so boring that “it’s harder than splitting gum logs in August to stay awake.”

So why did Crockett leave Tennessee? In 1834, after a successful book tour, he lost his bid for re-election to Congress. Having heard his friend Sam Houston talk about all the opportunities opening up in Texas, Crockett decided to go there himself. He left by way of Memphis and enjoyed himself on that last night in Tennessee. “Since you have chosen to elect a man with a timber toe to succeed me, you may all go to hell, and I will go to Texas,” he reportedly said there (in reference to his political opponent’s wooden leg).

And why is Crockett so well-known, even today? My theory has to do with the manner in which he died and the fame he experienced before his death. There are very few people in American history who were famous before they were killed in battle. Crockett was. He was a well-known U.S. representative, the basis of a well-known play and the subject of several books. Then, in January 1836, he went to Texas. He immediately enlisted in the army there and went to the Alamo. We are not certain whether he died fighting or was taken prisoner and executed.
Regardless of his fate, the man who spent almost his entire life in Tennessee belongs to Tennessee.

To learn more about Crockett, read “David Crockett: The Lion of the West” by Michael Wallis.