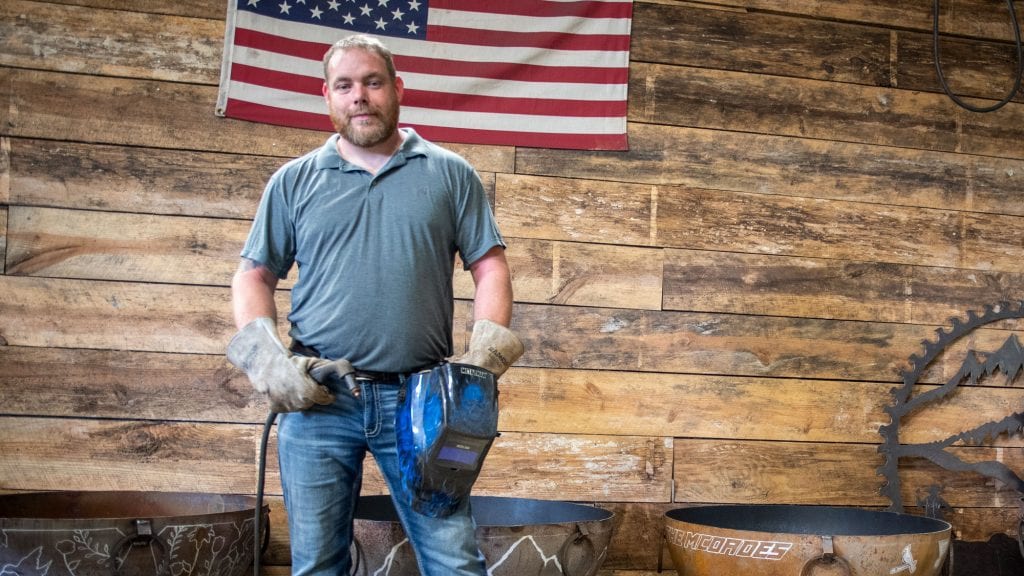 Fire was celebrated by our earliest ancestors. It provided warmth on cold nights and safety from predators. It brought light to the darkness and fundamentally changed the way we consumed food. Fire was a significant part of daily life. While technology has reduced our dependance on fire, most of us are still instinctively drawn to it for comfort and safety. There are few things better on a chilly night than sitting around a fire with the people you care about. From his workshop in Finger, Tennessee, David Mann hand crafts fire pits that are both functional and astonishingly beautiful. Mann gives us a reason to celebrate fire once again.

David Mann’s path to creating custom steel fire pits had some turns along the way. He learned to weld and use a cutting torch at age 13 by helping at his father’s trucking company. “Things are always breaking, and you can’t hire it out every time,” says Mann. “I taught myself. You just have to learn to do stuff.”

Though Mann always enjoyed drawing, a career in trucking and later forestry provided few opportunities for artwork. As he got older, he began to ask hard questions about what he really wanted to do.

Mann had been making hexagonal fire pits as a hobby until something he spotted on the side of the road caught his attention.

“I was driving down the road one day and saw an old propane tank,” said Mann. “I started thinking about how I could cut it up–take the ends off and use them. So that’s what I did.”

“It was about 2 in the morning, and I melted through a bowl,” says Mann. “I had accidently turned the heat up on my welder, and I burned right through it.” He pushed the “mistake” to the side but built a fire in it the next night. “I could see the light from the fire coming through that hole.”

Mann realized that he could cut designs on the bowls, allowing light to pass through, adding, “If I had more area to draw, I could make larger designs.” This led to the idea of putting two bowls together to make a sphere.

Still little more than a hobbyist, Mann rented booth space at the 2016 Fall Tennessee Craft Fair at Centennial Park in Nashville. “I got stuck in traffic and was 15 minutes late the first day,” laughs Mann. “When I finally got there, I came around the corner, and my booth was surrounded by people.”

Mann sold every fire pit he had in five hours. Word spread, and his Mann Made Fire Pits quickly became more than a hobby.

Each of Mann’s pits is a one-of-a-kind creation that will last for generations. “These are heirloom pieces,” says Mann. “You can literally pass these on to your children.”

Operating his business from rural Tennessee has helped Mann. The cost of overhead is much lower, and that has allowed him to expand his operation. “I love the Nashville area,” he says, “but this is where it started.” With a new workshop completed earlier this year, he plans to continue growing his business from McNairy County.

Ninety percent of the materials he’s used were headed for the scrap yard, he says. Instead, they’ve emerged from Mann’s workshop as functional works of art and centerpieces of backyard life.

Learn more about Mann Made Fire Pits online at mannmadefirepits.com or call 731-610-0326.