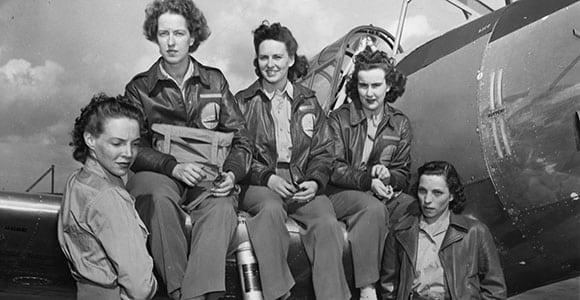 If Cornelia hadn’t gotten on that plane, she would have stayed in Tennessee for the rest of her life. She would have taken her place in Nashville society. And there might not be any reason for anyone outside of family and friends to remember her.

But Cornelia did take that maiden flight. In January 1940, when she was 20 years old, friend Jack Caldwell took her up in his small one-engine plane. They flew past clouds. They flew over the Cumberland River and over her family farm next to it. They flew over downtown Nashville.

Cornelia loved it so much that she started flying lessons the same day.

For the next several weeks she took a flying lesson every chance she could. She could afford to do this because her last name was Fort. The Forts, you see, were among the richest people in Nashville. Her father had just died, and her mother was not thrilled about her flying. But Cornelia was free to do what she wanted, and she wanted to fly.

By that summer, Cornelia Fort had a pilot’s license.

Flying wasn’t just about having fun. The more she flew, the better she got at maneuvering that plane. After she became a pilot, she told people that it made her happy to, in her words, “finally find something I am good at.”

In the fall of 1940, Cornelia got a job as a flight instructor in Colorado. For three months she gave flying lessons, mostly to men. She loved the work. She also loved the fact that no one in Colorado knew that she was rich.

A few months later, she got another job doing the same thing in Hawaii. Hawaii was very different than Nashville. It was also the prettiest place she’d ever seen. She loved everything about Hawaii — except that she missed Tennessee.

Then Sunday, Dec. 7, 1941, came along. Fort had no reason to think anything special would happen that day.

A student pilot and Cornelia took off from the runway at Honolulu’s airport early that morning. A few minutes into the flight, she looked to her right and saw another plane. It was a military aircraft, coming in from the ocean. At first she thought it was an American plane.

Then she saw that it had a red sun on it, which meant it was Japanese. She realized that there were other planes, all Japanese.

She knew what this meant: Pearl Harbor was being attacked.

Cornelia grabbed the controls and maneuvered away from the incoming plane. At that moment, she heard a series of loud thumps. The Japanese plane had fired at her plane and hit it.

Those shots were perhaps the first fired at Americans in World War II. Cornelia landed her plane safely.

After the attack, Cornelia’s flying service was shut down, and though she would have loved it, women weren’t allowed to fly in the military at that time.

She came back to Nashville. Reporters did stories about what she had seen at Pearl Harbor. She told them that what she really wanted was a chance get back at the pilot who had fired on her on Dec. 7.

For more than a year, Cornelia waited for a chance to serve her country. Then she heard the military was creating the Women’s Auxiliary Ferrying Squadron, or WAFS. The WAFS were going to move airplanes from places where they had been built to training bases.

Cornelia Fort was one of the first women chosen to be a member of the WAFS.

For several months, she served in the WAFS, flying airplanes from one part of the country to another. At times, it wasn’t glamorous work. But she was proud to be serving her country.

On March 21, 1943, Cornelia Fort was flying over Texas when another plane in her group accidentally struck her plane. She died instantly in the resulting crash and became the first female pilot in American history to die on active duty.

People in Tennessee were shocked. She was so young. It had only been three years earlier that she had gotten on a plane for the first time.

However, everyone knew that Cornelia had died doing what she wanted. If something were to ever happen to her, “I want no one to grieve for me,” Cornelia Fort had once written to her mother.

“I was happiest in the sky.”

To learn more about Cornelia Fort, read Rob Simbeck’s “Daughter of the Air: The Brief Soaring Life of Cornelia Fort” (2001).