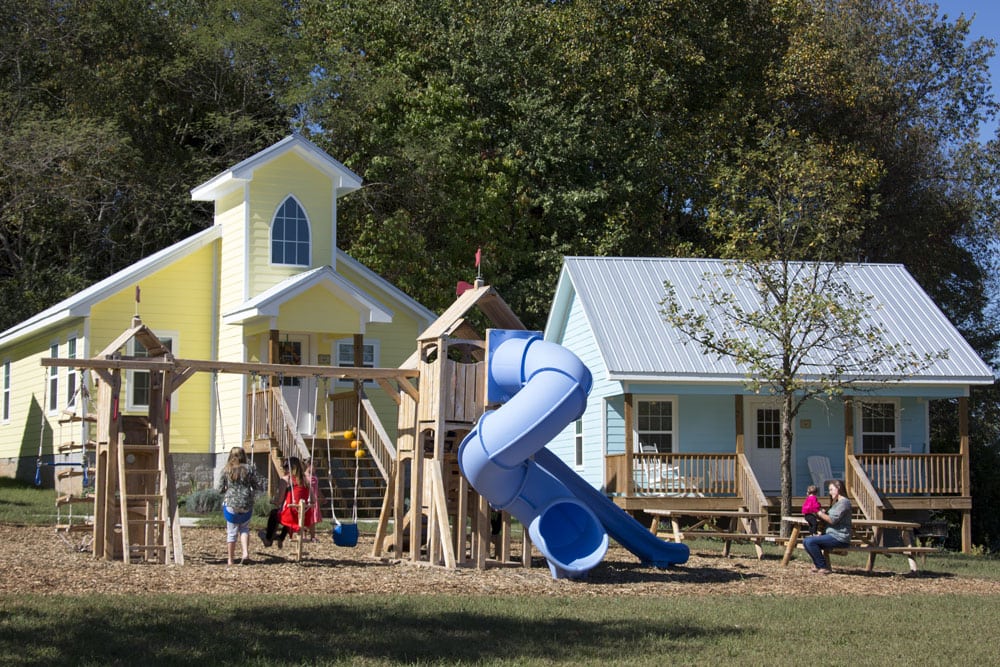 A lot can happen in seven years. That’s how long it’s been since The Tennessee Magazine featured Blue Monarch, a residential program in Coffee County that helps women and children recover from addiction and abusive situations. When that first article ran, Blue Monarch had helped around 300 women andc hildren in its seven years of existence. That number has now grown to 700, and more than 250 children have been able to re-establish relationships with their mothers who had previously lost custody.

“Part of our success is the small, family environment we provide here,” says Susan Binkley, founder and director of Blue Monarch.

The “here” she refers to is the 50-acre farm where Blue Monarch is located. It’s a beautiful, tranquil setting that’s perfectly suited to the healing process that goes on there every day. The program at Blue Monarch is a combination of common courses that all residents take and individualized counseling based on an individual woman’s situation and needs.

“Our core curriculum is taught by three program staff members here plus a work ethics course I teach myself before they graduate,” Binkley says. “In addition to that, we have around 20 volunteers who come in to teach other educational classes. Some of those are one-time classes while others are ongoing. For instance, we have a woman who has taught piano lessons since we began in 2003. And we always have outside volunteers help with GED studies and tutoring for our kids. But we have many others who may come in to teach a single class on a variety of topics such as cooking, nutrition, gardening, health-related issues, etc. We love to have experts in the community provide education related to their fields — such as a recent banker who taught a course on budgeting and money management.”

Children under the age of 12 can live with their mothers at Blue Monarch, and these kids’ growth and development are equally important.

“We established the Proverbs 22:6 Children’s Program several years ago but continue to strengthen it,” Binkley says. “We feel we have a very valuable opportunity to provide the richest experience possible for every child we serve.”

One of the biggest changes to Blue Monarch in the past few years has been the addition of the WINGS (Women in Newly Grounded Success) Community, transitional housing for recent graduates and their children. This area consists of four brightly colored cottages that allow graduates one additional step between living in the main Blue Monarch home and entering back into the real world with all of its pressures and temptations. The cottages were made possible largely through the generous donation from one family after the passing of wife and mother M. Jacqueline Peters.

“The construction took on a life of its own with supernatural speed,” Binkley says. “We built four houses in only 3½ months. It later became clear why. The generous man who, with his four children, made all this possible for us was al-ways concerned he would not live long enough to see the four cottages completed. He was not sick, so this never made sense to me. But he actually passed away only 11 days after our grand opening and dedication. I am so grateful he got to see how wonderful they were — and to personally hand the keys to all the first families moving in. The cottages were originally intended to be named after this gentleman’s wife, but after his death, we changed the sign to include both their names: Robert and M. Jacqueline Peters.”

Blue Monarch also held a successful campaign to raise the funds to furnish the new housing. Binkley says the effort brought people out of the woodwork to participate.

Although Blue Monarch had offered a transitional program for graduates since 2011, there was only one cottage to house one family. The addition of the four new cottages is a big leap forward for that stage of Blue Monarch’s services.

While the transitional housing is located on the same farm as the main residence, it is physically separated from the rest of Blue Monarch’s community living to provide added independence. The women participating in this program have the chance to gradually adjust to independent living while still benefitting from the support and accountability Binkley and her staff provide.

“For instance, they will continue being drugtested, and we will monitor how they spend their money and other choices they make,” Binkley says. “This also allows the mothers a chance to adjust to taking care of their own children without the support of other moms. For many, this may be the first time to care for their children, alone, as a sober parent.”

The transitional program allows the women a safe place while they begin school or a new job (or both). Otherwise, this could be an overwhelming time for them, so it is helpful to transition into the outside world while still within arm’s reach of support.

“Since we established the new housing in our WINGS Community, we have developed what we call our Restore Program,” Binkley says. “This allows previous residents to return for a period of six months to have a ‘refresher’ course and receive the services we offer to get back on their feet if they have been struggling. This limited opportunity is available when we have a gap between graduates and the transitional house would otherwise be vacant.”

Counseling that includes outside family members is an additional service Blue Monarch provides residents. Also, a recent graduate had plans to reunite with a former boyfriend, and the staff provided couples counseling for them before the resident graduated from the program.

While living at Blue Monarch, residents take part in group sessions, individualized classes, counseling and have chores such as taking care of animals and tending gardens. Everything they experience while in residence is aimed to arm them with the skills that will give them the best possible chance of not falling back into bad habits or dangerous situations when they leave. An essential part of what they learn is a work ethic that will help them find and keep a job, allowing them to take care of themselves and their children. To aid with this part of their training, Blue Monarch operates a successful and growing granola business.

“That change has been extremely successful, and the business has really thrived. We immediately received a generous grant to build the business, and we have been able to involve more of the women in the business through internships and additional paid positions. We have gained a number of new customers because of the simpler relationship between the two entities.”

When the original Blue Monarch story ran, the bags of all-natural granola — each of which includes a picture of a resident and a bit of her story — was sold at The Blue Chair, through mail order and at various stores and restaurants in five states. Now the granola business produces and sells 20,000 pounds of granola a year, but Binkley says that number will be rapidly changing.

“We were already included in the Pick Tennessee Products program at 27 Kroger stores, but that will soon increase to more than 50 stores,” she says. “We have also had a long, healthy relationship with Whole Foods stores in Franklin, Nashville, Chattanooga and Knoxville.

“We love to take our residents with us to demo our product in those stores. They enjoy sharing their personal stories with customers, and it just does something powerful to see their bags of granola going through the checkout lanes. That whole experience is such a boost to their self-esteem.”

In Nashville, Out of the Blue Granola is sold in locations such as Fido, Bongo Java, the Turnip Truck and the Produce Place.

Out of the Blue Granola is also considered “gift granola” and has even been used as wedding favors. Because each bag has that little card about one of Blue Monarch’s residents, Binkley says the support the women receive from across the country is staggering. They often get emails or notes in the mail from people who are cheering them on from a distance.

“The granola business helps Blue Monarch financially by spreading the word about our program in places that would otherwise be difficult to reach,” Binkley says. “The nonprofit has gained support in the six-figure range from something that began as a single bag of granola.”

The granola business provides jobs for the residents at a time when they would otherwise be unemployable. Not only do they gain a good job reference, get great job training and earn an income, but those facing felony charges also can establish a positive work record — something that’s very difficult to do. They also earn an honest income, sometimes for the first time in their lives, and are able to pay off steep court fines and debts that would otherwise be difficult to overcome.

Binkley says the pride the women hold because of their granola jobs is “very moving.” Even though they most likely made more money on the streets selling drugs, they are excited about their paychecks and are proud to show their children what they are doing to support their family.

While everyone associated with Blue Monarch should be proud of all they’ve accomplished in the 14 years it has been in operation, there is always more that can be done. No matter how many women and children the organization helps, it’s an unfortunate truth that there are always others in dire situations that could benefit from that same type of support, counseling and training. Thus, it’s no surprise that Binkley has ideas for additional ways Blue Monarch can grow and help those in need.

“We would like to maximize our current property with the addition of more housing,” she says. “We also want to construct a multipurpose building that would include a chapel, classrooms, computer lab, office space and recreation area. We would also like to construct a new granola kitchen with easier access for freight trucks that are now picking up our product.”

Additionally, Binkley is interested in enriching the current farming program. Though each family has a raised garden of its own to tend, there exists the possibility for a larger, more sustainable farming program on the property’s acreage.

Representatives of new or growing organizations that would like to learn from the Blue Monarch experience sometimes approach Binkley. She says she would like to put the knowledge she and her staff have accumulated into a format that can be easily shared with others “as a way of helping more and more families through other folks.”

Binkley, who says she firmly believes that part of the reason for Blue Monarch’s success is the small, family environment provided there, adds, “We are committed to finding ways to serve more women and children without sacrificing the quality of what has worked for us.”

“Through the past 14 years, our program has become richer and richer,” Binkley says. “We focus just as much time and attention on the children we serve as we do on the moms. For this reason and the fact we are peacefully located on a beautiful farm where God provides such a wonderful sense of security and peace, we feel our program is incredibly unique. God has abundantly provided for us through the years, and we are anxious to see what He has planned for us over the next 14.”

For more information on Blue Monarch’s program, including how to apply for residency, how you can give or volunteer or how to buy some Out of the Blue Granola, contact: