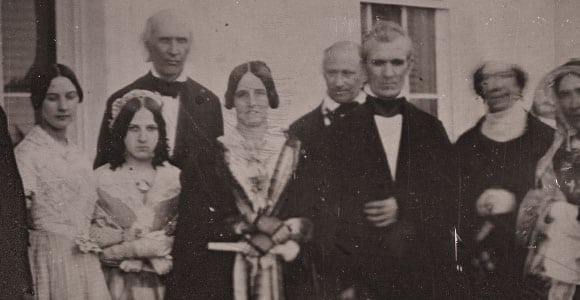 This summer, I researched and wrote four new “Tennessee History for Kids” booklets. In the process, I found some remarkable photographs.

The most interesting one is the property of the International Museum of Photography and Film in Rochester, N.Y. The photograph shows President James K. Polk posing along with a group of other people, perhaps on the lawn of the White House.

There are several things about the photograph that have taken me aback.

One is its age. The folks at the International Museum of Photography and Film believe the photo to have been taken in either 1846 or 1847. A website called www.whitehousemuseum.org puts the date at 1849. In any case, it is one of the earliest photographs ever taken of a sitting president and possibly the first that shows an American president with a group of people.

The second thing that amazes me about the photograph is the identity of the people in it.

President Polk is the man on the right of the photograph. To his right is his wife, Sarah Childress Polk. On Polk’s immediate left is Dolley Madison, widow of President James Madison. On the far left of the photograph is Secretary of State James Buchanan, who was later the 15th president of the U.S. To Buchanan’s left is Harriet Lane, Buchanan’s niece and the acting first lady during his presidency (Buchanan never married).

In other words, this photograph, taken in the first half of the 19th century, features two presidents and three first ladies representing administrations that served as early as 1809 and as late as 1861!

Since the photo is owned by neither the Library of Congress nor the Tennessee State Library and Archives, many Tennessee history experts say they have never seen it until now. “It is an incredible photo, and I wish I had found it before now,” says John Seigenthaler, the author of a 2004 biography of Polk.

I have found the remaining people in the photo to be interesting, even though in some cases we aren’t exactly sure who they are.

The tall man standing in the back is Cave Johnson, postmaster general of the U.S. Johnson later served as a U.S. representative from Tennessee and is still remembered by the people of Clarksville. Johnson, by the way, was the postmaster when the U.S. Postal Service introduced the postage stamp in 1847!

The young lady standing on Mrs. Polk’s right is probably her niece, Sarah Polk Rucker, who attended private school in the area and frequently stayed in the White House on weekends. However, we aren’t certain.

Then there is the man standing behind President Polk. The cutline held by the International Museum of Photography and Film reports this man to be Secretary of the Navy John Y. Mason. However, the man pictured here doesn’t look much like the Library of Congress photograph of Mason.

Meanwhile, I found a website called “Presidential History Geeks: James K. Polk and Dolley Madison” on which someone claims that the person standing behind Polk is Missouri Sen. Thomas Hart Benton. If true, this gives the photo another hook in terms of Tennessee history. After all, Thomas Hart Benton and his brother once got into a brawl with Andrew Jackson in the streets of Nashville.

The woman on the far right in the photograph may be Mrs. Cave Johnson, but no one is certain.

Finally, we are not sure about who took this photograph. In a book called “Facing the Light,” Harold Pfister suggested that it was taken by artist G.P.A. Healy.

What became of some of the people pictured here?

President Polk died of cholera on June 15, 1849, only months before he left office. His widow, Sarah Childress Polk, would live for another 42 years. Her home in downtown Nashville was revered during her lifetime; invading Union soldiers were ordered by Gen. Ulysses S. Grant to treat her and her property with utmost respect.

Dolley Madison died only weeks after President Polk. Many of the traditions associated with the First Lady of the United States are derived from her.

James Buchanan was the last president of the U.S. before the Civil War.

In any case, I can’t help but stare at this photograph and feel some wonder that it has survived. Whether it was taken in 1846, 1847 or 1849, it is amazing to contemplate how much the U.S. and the White House would change in the 15 or so years after it was taken.