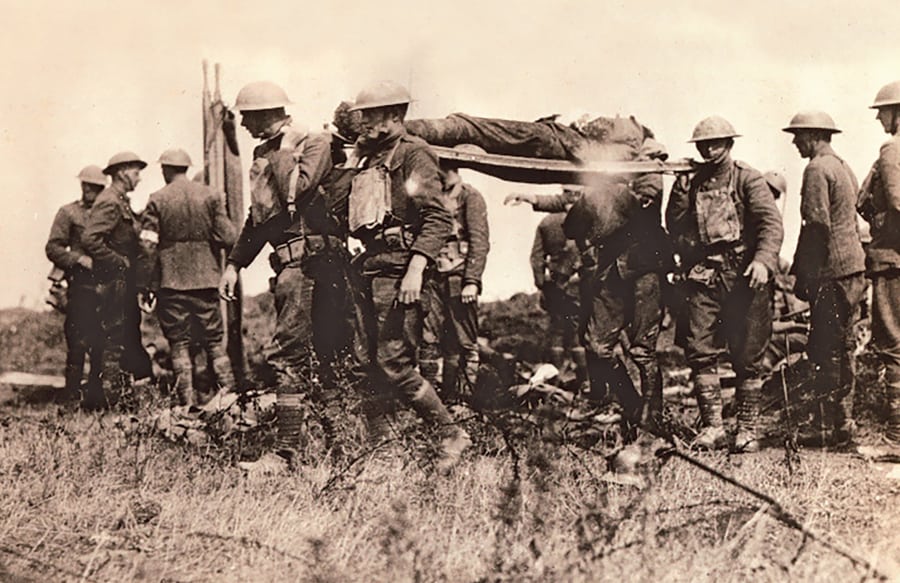 Photographs courtesy of the Tennessee State Library and Archives

One hundred years ago, the United States entered World War I on the side of Great Britain and France. This month, I thought I’d write about Tennesseans who fought in what for many years was known as the “Great War.”

“Remember that the United States joined the war three years after it began for most of Europe, and Americans were only in combat for a few months,” says Ken Fieth, head archivist for the Metro Nashville Archives and a World War I re-enactor. “But even though we were only in the war for a few months of actual combat, our casualty rate was staggering for that short amount of time.

“American forces fought aggressively, without regard to losses.”

Most of the Tennesseans who took part fought for the 30th Infantry Division of the U.S. Army — nicknamed the Old Hickory Division in honor of Andrew Jackson. This division trained at Camp Sevier near Greenville, South Carolina, and made its way to Europe in the summer of 1918 aboard troop ships escorted by the U.S. Navy.

The Old Hickory Division was attached to the Second Army of the British Expeditionary Force. At the time, the British were fighting off a desperate German offensive meant to reach Paris and somehow force the French to surrender. Sure enough, the addition of American troops helped turn the tide. By September 1918, the infantrymen from Tennessee were in the thick of it, having run into a near-impenetrable part of the German defenses known as the Hindenburg Line.

It was there that the casualties mounted and the fresh troops from Tennessee made a big difference. “The 30th Division did especially well,” Gen. John “Black Jack” Pershing later wrote. “It broke through the Hindenburg Line on its entire front and took Bellicourt and part of Nauroy by noon of the 29th.” The infantrymen were accompanied by about 150 American tanks, which proved to be effective weapons against the Germans’ entrenched machine guns.

Six Tennesseans later received the Medal of Honor. The most famous was Alvin York of Fentress County, one of the best-known war heroes in American history. York’s fame obscures that of the other five — Joseph Atkinson, J.E. Karnes, Edward Talley, Calvin Ward and Milo Lemert. However, one glance at the official record proves that they were no less brave than York.

According to witnesses, Lemert’s last words were, “I am finished, boys. Give ’em hell.”

Other Tennessee World War I heroes who were widely heralded in the generation after the war (but largely forgotten now) include:

Speaking of U.S. senators from Tennessee, Luke Lea was serving in the Senate in 1917 when he volunteered. He fought with the Old Hickory Division and reached the rank of colonel. But Lea is better remembered for what he did after the fighting stopped than before.

In January 1919, after the armistice was signed but before most American troops came home, Lea and other officers from his unit made an unauthorized and foolhardy attempt to kidnap Kaiser Wilhelm of Germany. The kaiser, you see, had abdicated the throne a few months earlier and fled to a castle in the Netherlands. He did so in hopes of escaping punishment for his role in starting the war in the first place.

Lea and some other officers crossed the border and bluffed their way into the estate where the kaiser was staying. But after they admitted to the kaiser’s aide that they weren’t on an official visit from the U.S. government, they were denied an audience with the former king.

Had they no proof of their bizarre attempt to kidnap the kaiser, it might be that no one would have believed their story. However, while in the manor, an American captain named Larry MacPhail pocketed a monogrammed ashtray that belonged to the former German king.

“I was in touch with the family not long ago, and they told me that they still have it,” says Hobart Akin, who heads up the living history program for Tennessee State Parks and who frequently tells this story.

As for Luke Lea, he later owned the Nashville Tennessean newspaper. As part of his development of the Belle Meade area, Lea later donated more than 2,500 acres of beautiful hills to the city of Nashville. Today, they are known as the Warner Parks.

Next month’s column will be about the Tennessee homefront during the war.