Mudslinging from the mid-1800s 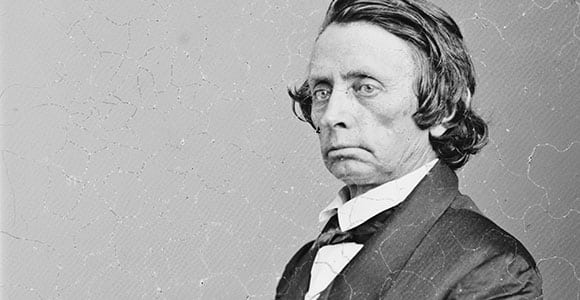 William Brownlow was the governor of Tennessee from 1865 until 1869. He was controversial, to say the least. Brownlow was a unionist who served at a time when most Tennesseans were bitter about the outcome of the Civil War. He had little sympathy for Confederate veterans; in fact, he saw to it that they were barred from voting in 1867.

Brownlow also had a tendency to make enemies. You see, prior to being the governor, he was a Methodist minister and a newspaper editor. His newspapers (The Tennessee Whig, later the Knoxville Whig) published editorials that were so entertaining and mean-spirited that they had subscribers from all over the country.

I don’t know of any way to describe these insults other than to cite examples:

On East Tennessee politician Landon Haynes:
“[I] pronounce Landon Haines of the county of Carter and state of Tennessee, a liar, a puppy and a SCOUNDREL and if he does not call me to an account for it, the first time he comes to this village, I insist he does not possess the courage of a spaniel dog.”
— Whig, March 26, 1840

On Jonesborough resident Lawson Gifford:
“Point us to a female on the pavements of our streets, arm in arm with Lawson Gifford, and we will show you a female of suspicious character — or one whose family is under the weather, because of some thefts or frauds committed by the heads thereof.”
— Whig, May 14, 1840

On people who live in New York:
“New Yorkers suffer from all sorts of diseases, mental and corporeal. Among those maladies which I have noticed the most prevalent, and the most injurious in their effects, are dizziness, restlessness at night, obstinate coughs, pains in the joints, bleeding at the nose, sore eyes, inclination to steal, headache, disposition to lie … thirst for liquor, pallid hue, bad taste in the mouth, down looks, guilty conscience, offensive breath, itching of the head, occasioned by the crawling of legtreasures, griping of the bowels, swelling of the stomach, nausea, squeamishness, leanness, meanness, dejection of films and mums — and in short, a total want of all that is required to constitute the man.”
— Whig, April 7, 1841

On Jonesborough:
“This is emphatically Dog Town, a town literally overrun with dogs! There cannot be less than 150 surplus dogs in the place.”
— Whig, July 21, 1841

On the ladies of Washington, D.C.:
“I noticed a number of ladies, passing out of their doors, into their carriages, and to the scene of action, and many of them are so ‘hardflavored,’ that if I had to dance with them, I should insist on dancing with our backs fronting each other.”
— Whig, May 25, 1842

On Andrew Johnson:
“What could the people have been thinking when they elected this huge mass of corruption to Congress — this beast in human form, whose violence and rule of passion, vicious life and unprovided death, alone qualify him to serve as one of the bodyguards of Beelzebub?”
— Whig, Dec. 13, 1843

On President Andrew Jackson (at the time of his death):
“After a life of 80 long years, spent in the indulgence of the most bitter and vindictive passions which disgrace human nature and distract the human mind … he is gone to a land of deepest shades, and we are willing to take our leave of him. He has passed out of our hands, into the hands of a just God.”
— Whig, June 16, 1845

On Presbyterians who live in Chattanooga:
“[They] have means and influence, worship God in an old rat harbor and dirt pen of which they individually ought to be ashamed.”
— Whig, Nov. 11, 1846

On U.S. Rep. Thomas D. Arnold of Tennessee:
“A liar, a scoundrel, and a coward, having no honor, no principal, and no resentment, unless it be in a contest with his wife, a clever, but broken-hearted woman, who has been whipped and abused on more occasions than one.”
— Whig, July 23, 1852

On the city of Memphis:
“The streets of Memphis are in a worse condition than any streets I ever beheld. The mud is deeper, softer, filthier, meaner and more universally diffused over the city, than any mud, in any civilized town on this continent.”
— Whig, March 20, 1858

On U.S. government during the Buchanan administration:
“Corruption, foul and loathsome, wicked and damning, swarms around the White House, in all the Departments … legislation is bought and sold. Members of the House, in violation of their oaths and honor, have sold their oaths and honor. … Senators stagger into the chamber, from drunkenness, and swear profanely while in session, talking to one another — a disgrace to the Nation and to the state which sent them here.
— Whig, May 26, 1860

On the so-called American political party:
“No epithet is too low, too disgraceful or too degrading to be applied to the members of the American party. … Decent men shun coming in contact with either of them, as they would avoid a night cart, or other vehicle of filth.”
— Whig, Oct 27, 1855

On the Democratic Party:
“They may call me a Black Republican, an ally of the North, or what not; I am against the thieving party in power. And if the opposition shall nominate The Devil Himself with Horns and Tail on, I will take him as a choice of evils, against any of the corrupt, insincere, and plundering leaders of this self-styled Democratic Party.”
— Whig, Aug. 13, 1859

On Rep. John H. Crozier:
“There is one man in Knoxville, I confess before God and this audience, I do fear, nay, I dread him –— that man is John H. Crozier. I do not fear that he will meet me face to face and make an open manly attack upon me. Never! But I fear that, as mean and stingy as he is, he will shell out one hundred dollars to some irresponsible vagabond and assassin to shoot or stab me in the dark, or at the dead hour of night, apply a torch to my house and burn it down over my head.”
— Whig, Oct. 17, 1860

On people who fought for the Confederacy:
“A rebel has two rights, a right to be hanged and a right to be damned.”
— Cincinnati Gazette, April 1862

On former Tennessee Gov. Isham Harris (who preceded him in office and sided with the Confederacy):
“Harris is about five feet ten inches high, weighs about one hundred and forty-five pounds, and is about fifty-five years of age. His complexion is sallow — his eyes are dark and penetrating — a perfect index to the heart of a traitor — with the scowl and frown of a demon resting upon his brow. The study of mischief, and the practice of crime, have brought upon him premature baldness and grey beard. With braven-faced impudence, he talks loudly and boastingly about the overthrow of the Yankee army, and entertains no doubt but the South will achieve her independence. He chews tobacco rapidly, and is inordinately fond of liquor.”
— Whig, May 10, 1865

To this day, the Tennessee Constitution (written in 1870) specifically forbids “ministers of the gospel” from being governor. This clause violates the U.S. Constitution, so it is unenforceable. I have always believed that it was put in the state constitution because of William Brownlow.

To learn more about Brownlow, read “Secessionists and other Scoundrels: Selections from Parson Brownlow’s Book” by Steven Ash.