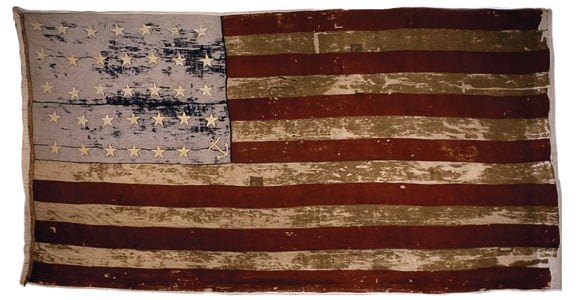 The Nashville Unionist and his glorious flag: Captain William Driver’s large American flag, handmade for the captain by the ladies of his native Salem, Mass., was the first to be called Old Glory and is now displayed in the Smithsonian Institution’s National Museum of American History.

During the Civil War, most people in Nashville sided with the Confederacy. But there is one Unionist we remember well, and his name was William Driver.

Driver lived in a small house on Summer Street (now known as Fifth Avenue). If you didn’t know any better, you’d think Mr. Driver was just another clerk at the corner store. But people who knew him called him Captain. They treated him with respect — and for good reason.

Driver was born in Salem, Mass., in 1803. In those days, you didn’t have to go to school like you do today. Instead of sending your son to a school, a man could order his son to go to work as an apprentice, or sort of a worker-in-training.

Thirteen-year-old William Driver was apprenticed to a blacksmith. He didn’t like it much. In fact, the Driver boy ran away from the blacksmith’s shop and signed on as a cabin boy for a merchant ship.
William Driver’s father was not pleased with his runaway son. He sent William a letter telling him not to come home until he was captain of his own ship.

Seven years later, William came home to tell his father that he had, in fact, become captain of his own ship. Dad was proud. So were the ladies of Salem. They presented William with a wonderful American flag that they had sewn together. It was huge: 12 feet by 24 feet! He liked it so much that he called it “Old Glory.”

A few years later, in 1831, a fleet of seven ships sailed out of Boston Harbor. One of them was William Driver’s ship, the Charles Doggett. “The weather seemed docile enough as his ship readied for departure,” Tennessee State Museum archivist Dan Pomeroy recently wrote in a Tennessee Historical Quarterly article. “But Driver soon realized that a storm was threatening, and, with the Doggett laden by 600 kegs of gunpowder, he felt that it was imperative that they get under way as quickly as possible.”

Driver was right to have been worried about the weather. A terrible winter storm struck, and six of the ships were capsized, leaving only the Doggett to continue the journey.

The Doggett made it around the world — no small feat at a time when the method of propulsion was wind. It took four months to make it to New Zealand. From there they went to an island called Tahiti and then to a mysterious place called Pitcairn Island.

At Pitcairn, they rescued the descendants of the crew that had once mutinied against the captain of the British ship HMS Bounty. That’s another story — one that you can see retold in the movie “Mutiny on the Bounty.”

Driver retired from the sea in 1837. You would think that he would have settled in Massachusetts or some other coastal state. But that’s not what he did. A widower with three sons, William Driver moved to Nashville, where his brothers lived. He bought a small house on Summer Street and went to work as a clerk at his brother’s store.

From that point on, on patriotic holidays Driver would get out his big flag, Old Glory, and hang it from a rope that stretched from his house to a tree across the street.

Nearly a quarter of a century passed. In 1861, Tennessee voted to leave the U.S. and join the Confederacy. Driver was torn. His three sons all chose to fight for the South. William remained loyal to the U.S. government.

Driver was afraid that the Confederates would break into his house to take his flag. He therefore had it sewn into a quilt for safe keeping. Then, in February 1862, Fort Donelson fell and the Union Army came to town. When they got to Nashville, they heard about Captain Driver and his flag. General Ulysses S. Grant sent someone down to ask the old sea captain if the Union Army might raise it over the Capitol.

Sometimes people get choked up at the sight of a flag being raised. This must have been one of those times. Imagine what it must have meant to those who were loyal to the Confederacy. They cried in despair.

Imagine what it must have meant to the loyal Unionists in Nashville to see that huge flag raised over the Tennessee State Capitol! They cried for joy.

Captain Driver got out his uniform and stood watch all that night, monitoring his flag to make sure it came to no harm.

Reporters thought it was a pretty good story. They wrote about the flag and about how people cried at the sight of it and about loyal Captain Driver. All over the North, people talked about it. Before long people were calling all American flags Old Glory. And, eventually, the name stuck.

Throughout the rest of the Union occupation, Driver was active in local politics. He was elected to the city council but, I’m surprised to learn, ran unsuccessfully for the state legislature and to be Nashville mayor.

Recently, James Jones of the Tennessee Historical Commission added to the online “Tennessee Civil War Sourcebook” something new he has discovered about Driver:

On April 14, 1862, Councilman Driver asked the Nashville City Council to require all teachers to take an oath of allegiance to the U.S. government. The cause? As it turns out, a teacher at Hume School in Nashville was teaching her pupils to sing a pro-Confederate song.

“The teacher who would introduce such trash into a school of young children deserves an immediate discharge on the ground of incompetency,” Driver told the council.

Driver died in 1886. In 1922 his descendants donated his flag to the Smithsonian Institution, where it is on display today.

Captain Driver is buried at Nashville’s City Cemetery. If you visit one grave in Nashville, you should visit this one. There are only a few places in the entire country where Congress has said the American flag can fly at night. One of them is William Driver’s resting place, which is marked by a ship’s anchor leaning against a vine-covered tree stump.