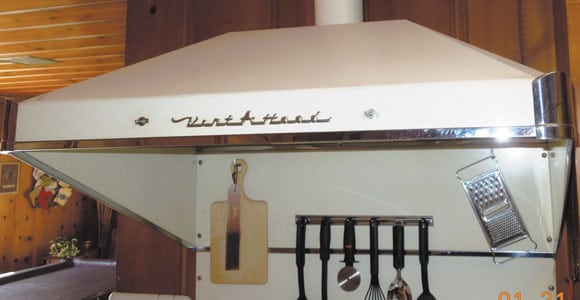 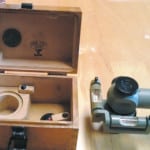 Attached, please find a picture of an instrument with “Carl Zeiss” over “Jena” stamped inside the top of the wooden box. I traded a gentleman for this but know nothing about it. Any information about its value or use would be appreciated.

Carl Zeiss was an optician from Jena, Germany, who began manufacturing medical devices in the 1840s. Lenses for binoculars and cameras developed by the company are still in production today. In fact, the Zeiss Company is working on a new lens for the Hubble Space Telescope.

A surveyor friend suggested your tool might be used in the mining industry. Similarly aged, Zeiss surveyor’s tools in their original boxes sell for $45 to $150. 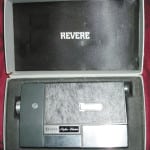 I recently acquired this camera at an antique shop. It has a small, silver circle on the side panel that says “98.” I bought the movie camera in what I believe is its original box. Both have the brand name Revere, and the camera also says “Reflex-Electric.” I was hoping you could tell me when it was made and its value.

Selling for $10 to $15, the Revere 98 movie camera was made around 1963. Here’s an odd thing — the ad for this camera currently sells for about the same as the camera itself!

As we move into the tablet and smartphone stage of technology, gadgets from the mid- to late 1900s may find a stronger market. A recent issue of Country Living features metal school lockers, typing tables, sporting goods and atlases from the 1960s. All things mechanical and mid-century are the new, big thing. Warning: I’m an appraiser, not a soothsayer, but my eyes are always open to the next generation of collectors. 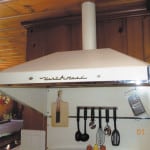 I hope you can help me determine the value of my range and vent hood. In 2003, I purchased the home my grandparents built in 1929. In my current kitchen, I have VentAHood and Tappan deluxe range that are both in working condition. I believe they are both 1950 models. The range includes a warming oven and a “Selecto Cooker Unit.” The cooker unit can be used in the upper position (flush to main top as a regular burner) or in the lowered position. My understanding is that this was used to cook beans, soups and stews that needed to be cooked “long and low” — a precursor to the Crock Pot.

I am preparing for a total kitchen remodel, and both my contractor and kitchen designer are interested in these appliances, so their value would be helpful.

How fortunate you are to have reclaimed the home your grandparents built. Both Tappan and VentAHood are well-built, mid-century appliances. Similar stoves in sketchy working condition are offered for between $400 and $900. For your good-working-condition stove and clean hood with flashy chrome detail, I’d ask up to $2,000 for both. Take what you will, though, factoring in the relationships involved.

Although stove-restoration companies might offer the pair for more than $4,000, they are in the business to fix, fuss, perfect and wait for buyers. But you’re ready to move on to remodeling and have willing buyers in the wings. I would remind your contractor and designer that good deals should spawn good deals.

Gas stoves seem to be higher in value and quicker to sell.