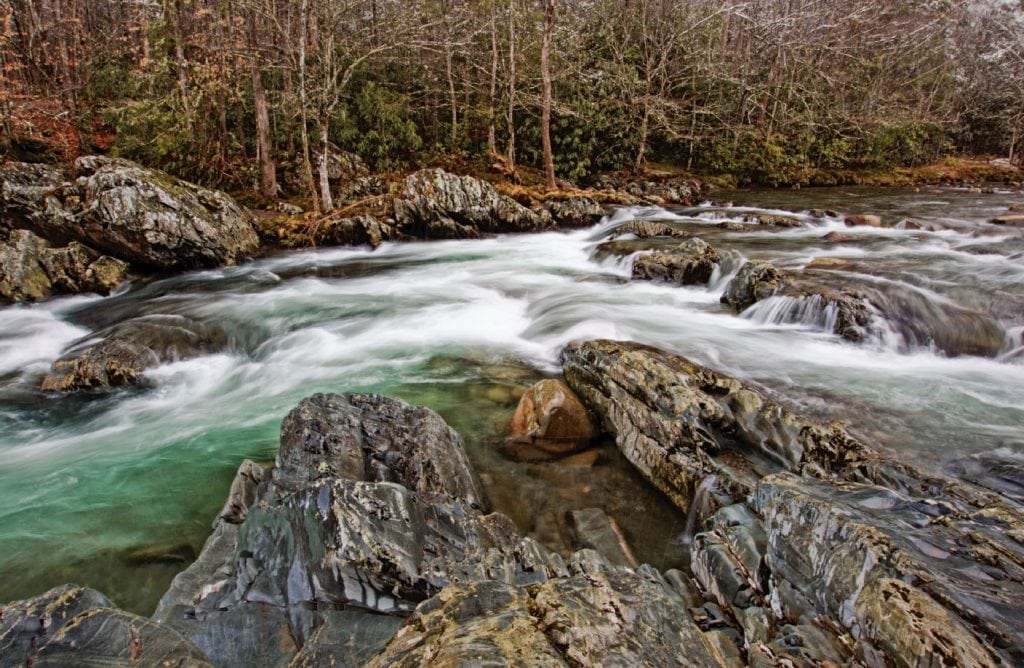 Anytime I have a chance to visit the Greenbrier area of the Great Smoky Mountains National Park, I do. I can’t tell you how many times I have photographed this stretch of the Little Pigeon River or hiked the Porters Creek and Ramsey Cascades trails where early Appalachian settlers once lived. With each visit, the season and elements of weather, light and water combine in a different way. It rarely disappoints except when the road is impassable — then that really disappoints!

The one-lane gravel road leading into the valley is located off U.S. 321 between Gatlinburg and Cosby. It’s far enough off the beaten path that it’s a quieter area of the Smoky Mountains. It’s nice having fewer hikers and cars with which to contend while trying to find new images to capture.

On this particular day in March, I had stopped by to see if spring wild-flowers had begun to emerge. As soon as I arrived, my plan changed as a late-season snowstorm moved in. A few heavy snowflakes can be seen as faint white streaks in this image. What snow fell quickly melted on the rocks, giving much richer detail to their surface.

Thick cloud cover acted as a giant softbox or diffuser to keep the scene evenly lit, though a bit dark. I used a circular polarizer to cut glare off the wet rocks and the water’s surface.

The slow shutter speed allowed the camera to capture the movement of the water, giving it a silky, painterly look. After a couple of test exposures, I chose 1/4 of a second because it was enough time for the water to blur and capture a slight hint of the snowfall. It also allowed for me to shoot at ƒ22, which gave the image the widest depth of field. Everything is in focus from the rocks in the foreground to the tree line across the river.

Most of the work in creating the image was capturing the scene, but I did perform post-processing on the original raw file. Using Adobe Bridge, I chose the color balance, set the black and white points and used the appropriate lens profile for correction. Once these settings were made, I opened the file in Adobe Photoshop and applied a slight HDR filter via Topaz, a third-party application.

The end result did not disappoint me even though it wasn’t what I had set out to photograph that day.