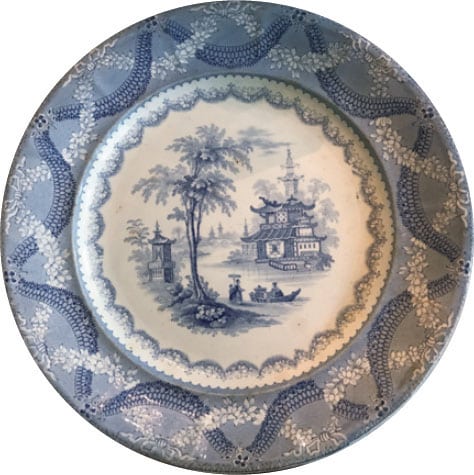 I thought that perhaps you could tell me if the pamphlet I found in the wall of my house while renovating would be of value to anyone. It instructs housewives to save the grease from cooking so it can be used to make explosives.

World War II salvage pamphlets sell for $5 to $12 each. Although the tone and information are a window into the war years, they haven’t taken off as pricey collectibles. Our matriarchs in the kitchen, trying to feed the kids, worrying about the menfolk and saving grease for the production of bombs is a memory worth mentioning.

These were in my grandmother’s family and “lived” through the war hiding in a hole in the floor. I would like to sell them but would like to know the value and how to go about that.

Your family’s dinnerware in blue and white transferware is called the Amoy pattern. It was designed by William Ridgway around 1840, so it was, indeed, made before the Civil War. I’ve found similar plates for sale at $70, but they tend to sell for just less than a third of that hopeful price. Serving pieces sell fastest.

Craigslist and other online sales venues are great places to sell items than can be easily shipped. Use the pictures you’ve sent to me, list the items for sale with prices and include a good group picture of all.

My grandmother gave me these glasses when we married in 1953. I do not know how long she had them. Could you tell me anything about them?

Your wedding tumblers were made by Jeannette Glass Company in Pennsylvania. The pattern name is Tree Bark Variant in marigold carnival. They sell for around $10 each if someone is looking to increase his or her collection. The pattern was made in the 1950s and ’60s, although Jeannette Glass was in production from 1887 to 1983. 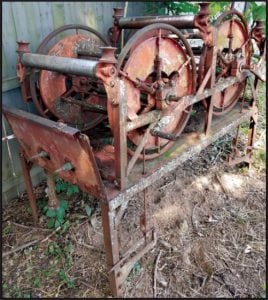 The response to my request to identify the rusted reels found on Angela’s farm (December 2017 issue) has almost unanimously favored this answer from Bob online.

We received our copy of The Tennessee Magazine yesterday. The unknown piece of farm equipment on page 40 appears to be a dual booster/red line hose reel unit from a firetruck. Such reels were common on fire apparatus during the 1930s through 1960s.

Such reels usually had a capacity of about 200-250 feet of 1-inch red line or booster hose. Note: The horizontal rollers in the photograph are the giveaway since they allow for easy payout of the hose to the right or left side of the apparatus. To the right and left of these horizontal rollers are smaller vertical rollers that are intended to keep the hose aligned with the reel.

The color red further indicates the likelihood of it being fire-apparatus-related. Some farm equipment manufacturers produced spray equipment for trees and crops, but I doubt that would have the configuration shown here.

Other contributors include online tipsters David, John, and Jerry as well as Thomas in Lebanon and Walter in Fayetteville. Carol’s, Jessica’s and Teresa’s husbands all agreed with Bob. Lillian thought it might be a threshing device, and Pam suggested use in rendering sugar cane. Thank you all!