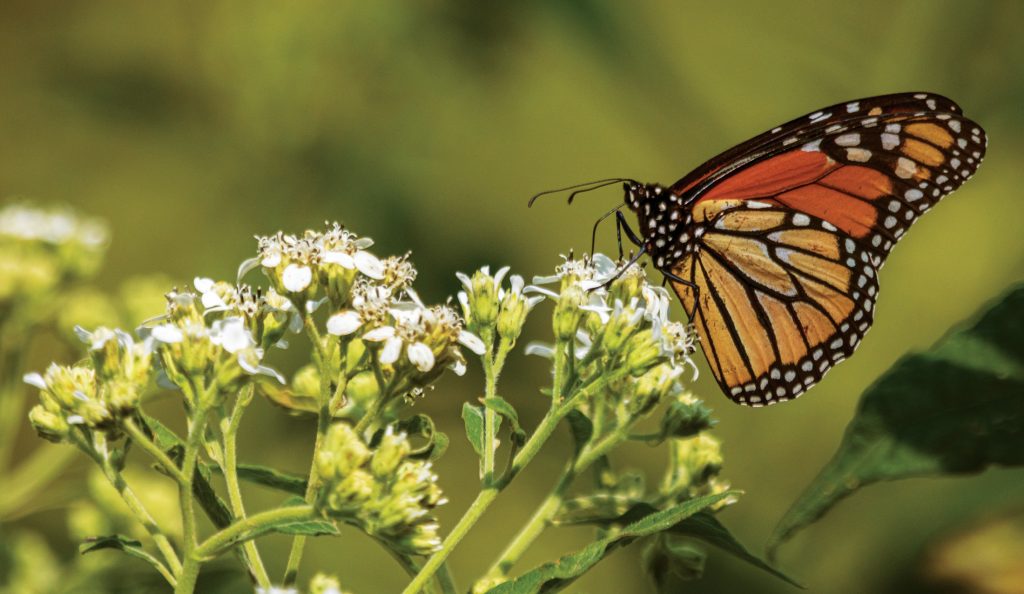 “Happiness is like a butterfly: the more you chase it, the more it will elude you, but if you turn your attention to other things, it will come and sit softly on your shoulder.” -Henry David Thoreau

One late August summer day, I found Henry David Thoreau’s words to be so true. I was on the hunt for butterflies, especially monarchs, in a stand of native grasses at Radnor Lake State Natural Area in Nashville. This area was planted about five years ago in an effort to provide more of the native grassland habitat that once flourished here.

Loss of habitat is one of the greatest threats to several species of butterflies. Restorative projects like Radnor’s and even planting butterfly-friendly plants in your garden can help lessen the decline in population.

Several varieties of ground-nesting birds and butterflies have already returned to the area as the grasslands have matured. Monarch and Eastern Tiger Swallowtail butterflies were abundant on this particular day.

Monarchs have a fascinating life cycle that ranges from just two to six weeks unless it is the last generation of the year to hatch. Those may survive eight or nine months, according to the National Wildlife Federation. It is this late-summer generation that will migrate south to Mexico for the winter.

The monarch has only one host plant, and that is milkweed. While there are many varieties of milkweed, it is becoming scarce. This is the sole plant on which they lay eggs as it provides the only suitable food for their larvae. Each larva quickly grows into a caterpillar that then forms a chrysalis. In about two weeks, it transforms into a butterfly and emerges to take flight. This miracle of nature takes about 28 days.

Photographing butterflies can seem to be just as fleeting and challenging as this life cycle. They rarely stay very long in one place, flitting quickly from one flowering plant to the next, gathering pollen and dew. The near-constant movement can make setting the correct exposure and focusing the lens a challenge.

As I watched them dart from bloom to bloom, I found that standing still did in fact attract some to land on my camera, my shirt and my hat. I even felt delicate wings flutter by my ear more than once, trailing a flash of color in my eye and leaving a smile on my face.