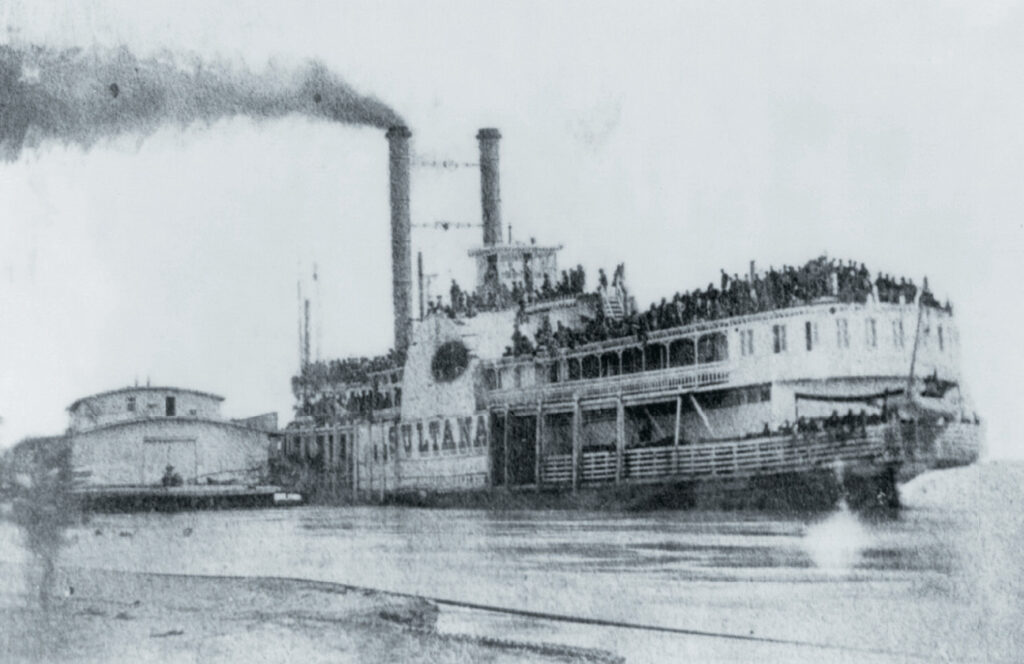 The day before the Sultana exploded, Thomas W. Bankes took this photo of it in Helena, Arkansas. Most of the passengers you see in this photo died the next day.
Share
Facebook Twitter LinkedIn Pinterest Email

On April 27, 1865, the steamboat Sultana was heading upstream on the Mississippi River, carrying more than 2,000 Union Army prisoners on their way home from Confederate prisoner-of-war camps. The boat exploded at about 2 a.m. About three-fourths of the passengers burned to death, drowned or died of hypothermia — the worst death toll for a maritime accident in American history.

After Gen. Robert E. Lee surrendered at Appomattox Courthouse, the Civil War quickly drew to a close. At the time, there were thousands of POWs held on both sides. Under the terms of the surrender agreement, POWs were to be freed and sent home as soon as possible.

In the South, an estimated 5,500 prisoners at the Cahaba POW camp in Alabama and the Andersonville POW camp in Georgia were marched to Vicksburg, Mississippi. There they waited to be loaded onto boats heading north.

Union soldier Samuel Washington Jenkins was asleep near the boiler when the explosion blew him into the Mississippi River. Most of his fellow soldiers drowned, but Jenkins “swam as much as he could to the bank, till he could get ahold of a tree to pull himself out.”
The U.S. Army commanders ordered these freed prisoners of war on civilian steamboats heading up the Mississippi River. The government offered to pay boat owners $5 per enlisted man and $10 per officer transported.

The first boat that took freed prisoners north from Vicksburg was the Henry Ames, which took about 1,300 men. Then a boat called the Olive Branch headed north with 700 freed prisoners.

What happened next makes no sense. The Sultana steamed into Vicksburg at about the same time as two other boats. After a couple of days, the Sultana left with more than 2,300 freed prisoners, plus an additional number of crew and passengers and a large shipment of sugar. The other two boats left Vicksburg with no freed prisoners on board but plenty of empty space.

At the time, many people raised questions about the disparity among the vessels. A former prisoner named James Brady, who was on the Sultana, said that he and his fellow troops had been “packed in more like hogs than men.” Meanwhile, the Sultana also had an official capacity of fewer than 400 people — about one-sixth its total passengers and crew!

To make matters worse, the Sultana had a leaky boiler. A Vicksburg mechanic patched it but warned ship’s captain, J. Cass Mason, that it might not hold. Mason ignored the warning.

The Sultana left Vicksburg on April 24, fighting the swollen current of the Mississippi River. The boat made stops in Helena, Arkansas, and Memphis before pulling out late on the evening of April 26.

At 2 a.m. on the 27th, the Sultana’s boilers exploded. The explosion threw many passengers and crew into the water, destroyed a large part of the boat and started a fire that quickly destroyed the rest of it.

You can read the horrible accounts of some of the survivors in books about the disaster. Some people burned to death, others drowned and many froze to death from exposure after jumping into the Mississippi River. Since few soldiers could swim at the time, most of the people who survived did so because they were able to grab parts of the floating wreckage and hold onto them until they reached shore.

No one is certain exactly how many people were killed in the Sultana explosion. Memphis attorney Jerry Potter, author of “The Sultana Tragedy: America’s Greatest Military Disaster,” estimates the number of deaths at 1,800, which exceeds by 600 the number killed when the Titanic sank in the Atlantic Ocean in 1912.

Those who did live through the experience later admitted they were very lucky. Samuel Washington Jenkins was a Union soldier from Bryson City, North Carolina, who had enlisted in the U.S. Army in Maryville. Jenkins grew up playing in some of the mountain swimming holes in the Smoky Mountains, which is why he knew how to swim. Jenkins was asleep near the boiler when the explosion blew him into the Mississippi River. Most of his fellow soldiers drowned, but Jenkins “swam as much as he could to the bank, till he could get ahold of a tree to pull himself out,” his daughter, Glenna Green, said many years later.

Jenkins eventually made it back home and eventually had 20 children, the first born in 1868 and the last in 1924. He became a doctor, practicing medicine in the Chattanooga area until his death in 1933. “He made up his mind (in the prisoner-of-war camp) that it didn’t matter what it took, he was going to work to make a doctor so that he could help humanity,” Green said.

Capt. Mason died in the accident. Frederick Speed, a U.S Army officer, was found guilty of grossly overcrowding the Sultana. His verdict was overturned by the Army, so the U.S. government never punished anyone for the disaster.

About 195 of the soldiers killed in the Sultana explosion were East Tennessee residents who fought for the Union cause. That’s why there’s a Sultana monument at the Mt. Olive Baptist Church Cemetery in Knoxville.