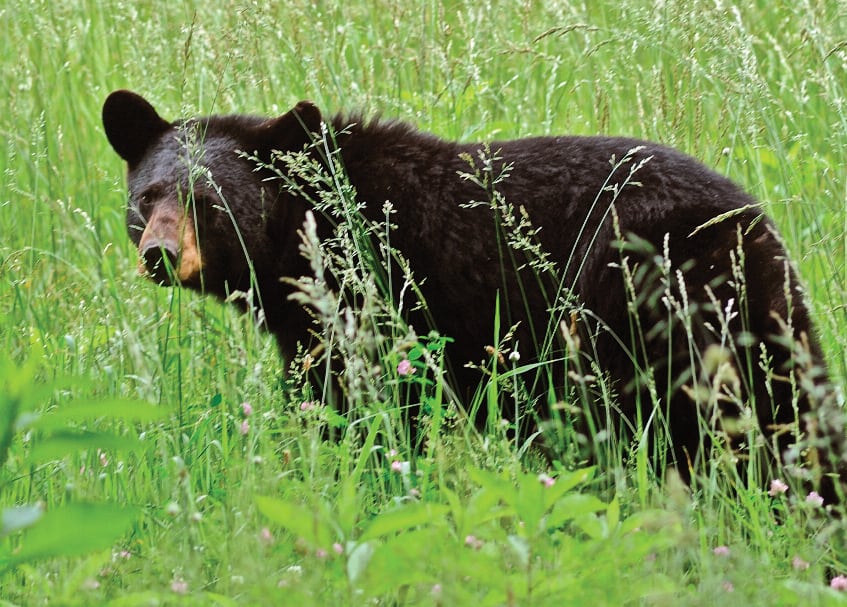 How to deal with bears, coyotes, wolves and other wildlife

Quick question: As a camper, which should you fear most: a wolf, a black bear or a chipmunk?

If you are to believe Lynn Rogers, the unlikely answer is the tiny chipmunk.

Rogers, principal biologist at the Wildlife Research Institute in Ely, Minnesota, says it would be “quite unusual” for a wolf to come into camp because they are not interested in the campers’ food or the campers.

The black bear, which could be drawn by the smell of food, is actually timid around people and can be easily scared away. But the chipmunk is likely to get into any food hung where it can reach it and destroy most any bag in which it is hung. Ditto for raccoons.

After studying bears for nearly 50 years and pioneering much of the research done on black bears, Rogers says a little pepper spray is all you really need to deter a black bear.

Rogers says it is best to carry Halt pepper spray, which is 1/6 the potency of Counter Assault (a harsher brand), because Halt comes out like a squirt gun rather than a fog. This minimizes the chances of the pepper spray blowing back on you.

“Halt goes 15 to 20 feet,” the scientist says. “Aim at the face. One drop in an eyeball makes a bear want to be somewhere else.

“A black bear coming closer than you want is probably just curious and not a problem, but if it gets that close, teach it some manners with a little squirt in an eyeball.”

“There is only one black bear in a million that would kill someone in predatory attack,” he says. “They come at you cautiously, wondering if they could take the food without any problem, but a little pepper spray can fix that.”

Despite being in close contact with black years for 50 years, Rogers says he has never been attacked. “Even when I was holding a tiny cub I had pulled from a den and that was screaming for its mom, I did not even get touched.”

A black bear and a grizzly bear are two entirely different bears, however.

In grizzly country, Rogers says to use Counter Assault to stop the bear.

“It is a fog that gets into a bear’s mouth, lungs, eyes and nose. Just be sure the wind will not blow the fog back onto you.”

A better bet with grizzlies is to avoid them, particularly if they have cubs or food. Rogers says that 70 percent of the killings by grizzly bears are mothers defending cubs. Another 10 percent come from bears defending its food cache.

“Most charges by mothers do not make contact,” he says. “The bears veer off at the end.”

If you don’t want to test that statistic, use the pepper spray. Tom Smith of Brigham Young University wrote the seminal scientific article on the subject. He said that pepper spray is more effective than a gun in avoiding injury from a grizzly.

Should you run from a bear?

“I hear that question frequently,” Rogers says, “and people have reacted and done everything across the board. Mostly what I hear when people talk about encountering a bear is that they ran one way and the bear ran another.”

And if you ever were to encounter a polar bear? Pepper spray is just as effective with them.

Here are a few other bits of advice from the Centers for Disease Control and Prevention: