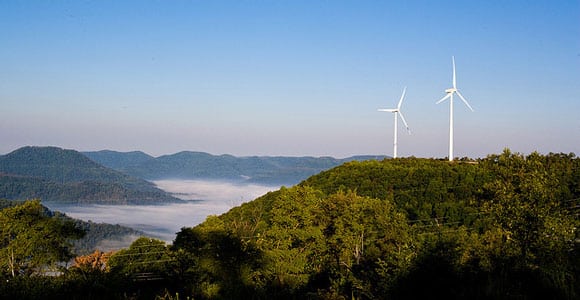 Wind energy development in the United States is rushing past recent growth records. For example, 6,819 megawatts of generating capacity were installed in 2011; in 2012, that figure jumped to more than 13,000 MW, according to the American Wind Energy Association. In total, the U.S. has more than 60,000 MW of installed wind power capacity.

Since 1 MW powers 750 to 1,000 average homes, more than 45 million American residences could be powered by wind. I say “could be” because wind doesn’t blow constantly. In fact, in our part of the country, there are very few places where the wind blows consistently enough for it to be a reliable power source. While we can’t rely on wind 24/7, it is one tool to have as part of a balanced generation fuel mix.

The industry boomed thanks to federal subsidies for construction of wind farms, sharp drops in production costs and rural economic development projects. Construction of the turbines themselves, however, is not the full cost associated with installing wind production on the electric grid.

Across the country, 50 electric co-ops either own wind turbines or buy output from wind farms, amounting to 4.3 gigawatts, or about 9 percent of the U.S. wind generating capacity. Of course, states in the Upper Midwest and Great Plains enjoy more opportunities for wind power than most others.

The Tennessee Valley Authority’s wind power site is on Buffalo Mountain near Oak Ridge. In 2004, TVA greatly expanded its wind-generating capacity by adding 15 very large turbines to the three original smaller ones at the site.

The primary federal subsidy for wind power project development — federal production tax credits — is available only to for-profit electric utilities. That means not-for-profit electric cooperatives can’t take advantage of the subsidies. Extension of the production tax credit is a hot topic in Washington, D.C., and the credit is likely to end soon.

To get competitive prices, electric co-ops and their wholesale power providers must sign agreements to buy electricity from private-sector wind projects or arrange long-term leasing agreements with a developer who qualifies for the federal incentives, rather than developing wind projects on their own. This would include the expense of transmitting the power from the Midwest to Tennessee.

While the idea of generating electricity from the wind seems to be a no-brainer — the fuel is free, after all — its costs rob wind power of some of its luster. If your cooperative were to rely upon wind generation to power your home, the utility would also require some form of backup power source to combat the intermittency of the wind. In essence, the utility must have redundant sources of generation. And that is very expensive.

Electric cooperatives are no strangers to innovation. As technology continues to advance, we will work hard to provide you with affordable, reliable electric power in a way that makes the most sense for your community.
To learn about other ways we’re looking out for you, visit www.tnelectric.org.