A spotters guide to distribution poles 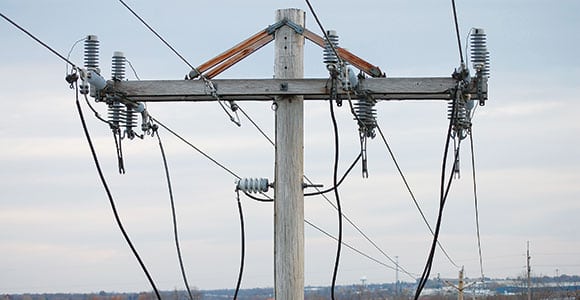 What’s all that stuff and what’s it do? 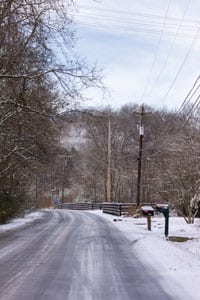 Ever look up at a utility pole and wonder: “What is all that stuff?” While wires are easy — everyone knows they carry electricity―— how about those attached metal boxes and other mysterious gadgets? What are they called, and what purpose do they serve?

With a little information, you can understand a lot more about the utility line you pass every day. Not only could “pole-spotting” shed light on the work done by your local electric co-op, you just might be able to impress your friends and family.

A guide to pole-spotting follows. Enjoy, but please keep in mind:

First, make sure that the pole you’re looking at is a distribution pole and not a transmission pole.

Transmission lines are designed to carry electricity longer distances and at higher voltages — 69,000 volts and greater. Relative to distribution poles, transmission poles are much larger — from 55 feet to more than 100 feet tall — with the lines higher off the ground. Some large transmission lines use steel poles and tower structures.

Transformers are something most people can already spot — they’re hefty metal cylinders that hang off poles. The transformer that connects your home to a distribution line lowers the distribution voltage to what you need in your house — generally 120 volts for your outlets and 240 volts for your air conditioner and clothes dryer. Look at the top of a transformer, and you’ll see bushings — ceramic projections with several disks running around the outside. On the inside of bushings are metal conductors; the outsides are insulators, so that when they attach to a transformer the metal casing doesn’t become electrically charged.

Capacitors look somewhat like transformers, with bushings on top, but have flat, rectangular casings. While transformers change voltage, capacitors improve the power factor on the utility lines — they prevent power from being wasted and help boost the voltage on long, rural distribution lines.

Reclosers protect lines and consumers from short circuits. For example, if a tree branch touches a line, electric current will flow through the tree, burning it and overheating the wire. Eventually, this will result in a fault that causes a protective device like a fuse or circuit breaker to operate and interrupt the power. Circuit breakers “open” the circuit, cutting off the power. Because many shorts correct themselves in a few seconds — as the high current will usually burn a tree limb away from the line — most modern circuit breakers have a mechanism that allows them to reclose a moment later (hence the name recloser). Like transformers and capacitors, reclosers also have bushings. They can be different  shapes but tend to be round or rectangular.

Fuses are also designed to protect lines and homes from short circuits. But fuses are one-shot devices — a fault like the tree branch described above on the load side of the fuse will cause it to burn out. A high-voltage fuse looks like a bar offset from the pole by one or more insulators. When a fuse blows, lineworkers have to go out and find why the fuse blew, fix the problem and re-fuse the line to restore power.

These four devices are the most common on distribution poles. Once you know what they look like, you’ll realize you’ve been seeing them every day for years.