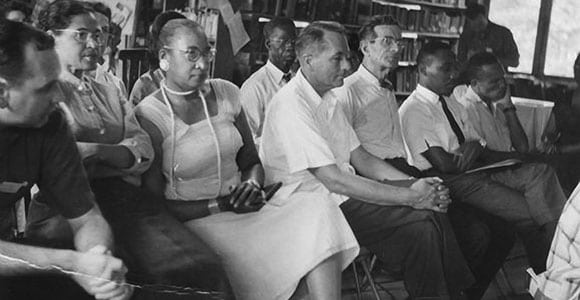 When people think of the civil rights movement, they often think of Selma or Montgomery, Ala., Atlanta or Memphis.

Maybe they should think of Grundy County, Tenn.

After all, it was at the Highlander Folk School in Grundy County that early civil rights strategy was mapped out. At Highlander, white and black activists — including Martin Luther King Jr. and Rosa Parks — met in the 1950s to talk about how they might change the South. It was at Highlander that many civil rights leaders trained.

Because it was so controversial, the Highlander Folk School was shut down by the government and its assets seized. However, a successor organization, known as the Highlander Research and Education Center, still exists in East Tennessee.

There are books and documentaries about the Highlander Folk School. The institution was founded in 1932 by Myles Horton, a native of Savannah, Tenn. In the 1920s, Horton travelled to Denmark and was impressed with the concept of the Danish Folk School, where ordinary people learned everything from agricultural methods to how to read. Upon his return to the United States, he looked for a place to start something loosely based on this idea. A retired college professor named Lillian Johnson donated mountaintop land in Grundy County to the cause.

Horton’s ideas were radical by standards of his time. He believed in racial integration at a time when integrated events and schools were illegal. He also believed that workers of various kinds should form labor unions, something to which business leaders were opposed.

At the time of Highlander’s founding, Horton became involved in the Wilder coal mining strike. In 1932, miners in Fentress County went on strike to protest low pay and unsafe working conditions. The company hired replacement workers to work the mines, but during the next few months, there were violent incidents committed by both the striking workers and management.

After things began getting violent, Horton warned union president Barney Graham to leave. Graham ignored Horton’s advice and, on April 30, 1933, Graham was shot and killed by company guards in broad daylight. “If I hadn’t been a radical, that would have made me a radical then,” Horton later wrote.

By standards of his time, Horton certainly was a radical. In the 1930s, Highlander was involved in attempts to organize labor unions all over the South. In the eyes of many people, such activism was communistic.

In 1939, the Nashville Tennessean newspaper sent a reporter to spend time at the school. A few weeks later, in a six-part series on the front page of the newspaper, the reporter concluded that Highlander was “a center, if not the center, for the spreading of communist doctrine in the South.”

Horton denied that he was a communist, and many of Highlander’s allies responded with angry letters to the Tennessean.

In 1952, Highlander shifted its focus from labor organizing to civil rights issues such as voter registration and desegregation.

Horton later wrote that Highlander didn’t so much “train” people in how to work for civil rights; it got people together in a setting where they could talk. “We had made the decision to do something about racism — we were having workshops with black and white people to figure out some answers — but we didn’t know how to tackle the problem,” he wrote in his autobiography. “The Highlander staff … just decided to get the people together and trust that the solution would arise from them.”

At Highlander, participants met in small groups and talked about what they wanted to change about society, how they might organize change and how they might change people’s minds about change. The type of protest method that was taught was nonviolent in nature.

It was at Highlander Folk School that the song “We Shall Overcome” became a symbol for the civil rights movement.

In 1957, Martin Luther King attended a weekend event in honor of Highlander’s 25th anniversary. Among those in attendance were representatives of the Federal Bureau of Investigation, looking for proof that King and Highlander were breaking the law.

A few weeks later, the Georgia Commission on Education published a pamphlet titled “Highlander Folk School: Communist Training School, Monteagle, Tennessee.” This pamphlet claimed that there was ample proof that Highlander, as well as the entire civil rights movement, was communist in origin.

Horton argued otherwise. “Highlander did not and does not welcome enrollment of anyone with a totalitarian philosophy, whether from the extreme right or the extreme left,” he said.

Among the people who came to Highlander’s defense at this point was Eleanor Roosevelt, who gave Highlander a check for $100 and visited the school.

Today, these types of accusations might seem bizarre and paranoid. But in the 1950s — the era of McCarthyism in the U.S. — people felt differently.

In 1959, the Tennessee General Assembly conducted an investigation of Highlander that eventually led to the place being padlocked and closed. “You can padlock a building, but you can’t padlock an idea,” Horton said to reporters on the day the sheriff took over the property.

By this time, the civil rights movement had, in fact, become an idea that could not be padlocked.

All the property that the Highlander Folk School owned in Grundy County — land, buildings, a pond, books — was eventually taken over by the government, which subdivided the land and auctioned it off.

Today, many of the structures that were used by Highlander prior to 1959 — such as the library building — are still standing. In recent years the land served as the headquarters of a ministry called Sports and Cultural Exchange International. That organization has been trying to sell the property for a year now. “We know some very important things happened here, and we would love to see it preserved,” says Brenda Gordon, one of the organization’s directors.

Myles Horton remained active in Highlander until his death in 1990. He was buried at the cemetery adjacent to the original Highlander site.

Note: If you go online and search for the words “Highlander FBI file,” you can see the recently released documents about the FBI’s investigation into Highlander.