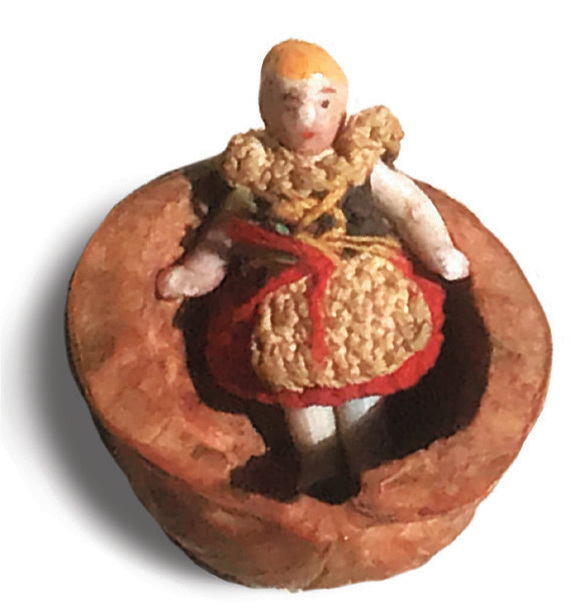 I am sending pictures of a tiny doll my father had of his mother. Her grandmother was German, which I think is where this doll may have originated. It has crocheted or knitted clothing and arms and legs that move. As you can see, she fits inside a walnut shell. Anything you can tell me about this little treasure would be greatly appreciated.

You are correct. The doll is German-made. Carl Horn produced these jointed miniature dolls from 1906 to 1930 in Dresden. Many were clothed in crochet. They can sell for $35 to $100. Condition is important.

This is a canister set marked “MZ Altrohlan C-M-R Czechoslovakia.” In addition to the five shown in the picture, there is also one for rice and barley.

The mark you shared with me dates production between 1922 and 1925 in Czechoslovakia. A similar set of nine pieces is currently for sale on eBay for $70. Similar gently used sets sell for $20 or less at estate sales. Individual pieces bring $5 to $8.

The English names on the canisters indicate they were made for the English speaking countries.

They were very popular in the U.S.

This was brought to the U.S. in 1952 by my aunt (by marriage). It was her dad’s and purportedly made in the 19th century. Do you have any insight? The inside has a flat board for writing and little compartments for pens, etc. I wish I knew more about it.

In the 19th century, men often received similar lap desks as gifts for important accomplishments and milestones. Some were made of fancy burled wood, and others like this one had intricate marquetry. Many had a hidden “trigger” that opened a secret hiding hole beneath the pen and clip compartment. Some had a fitted space for an inkwell.

Like a 20th-century briefcase, lap desks were used while traveling as well as in the office. A similar lap desk sold recently at auction for $175. Damaged, less intricately decorated lap desks can sell for as low as $20 at liquidation sales.

In the 1970s, local woodworkers made fitted frames with legs for lap desks for use as side tables. Value then was similar to the current values. 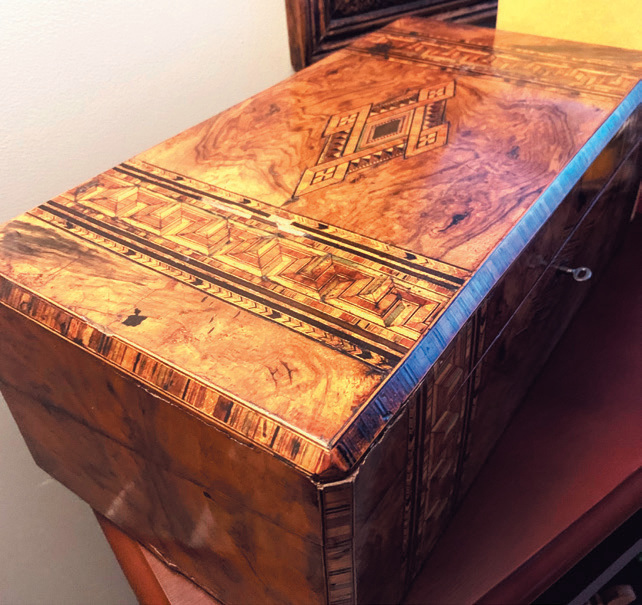 I recently inherited this sugar chest from my father and would like to know more about it. There aren’t any markings or writings available. I know that it belonged to my great-grandmother.

Sugar chests are treasured heirlooms in this area. I think yours was made by combining two mid-1800s pieces. The top is a six-board chest, possibly made for storing sugar. The base, though, was made by a different woodworker. 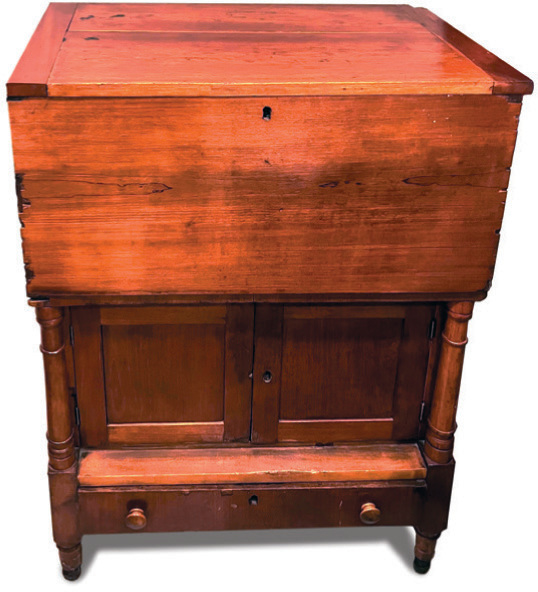 I was suspicious of the combination and asked you to send a picture of the back of the piece. That picture revealed the different woods and hand-planing marks. The base has holes at the top of the back, indicating an earlier use. Value is between $500 and $750.

I still consider this to be a fine family heirloom. Sometimes people alter or combine things to suit their needs.

Want to learn more about your antiques?

Connie Sue Davenport makes her living by appraising houses full of antiques for private clients and at appraisal events hosted by businesses and organizations. Her website, ConnieSue.com, describes these services.