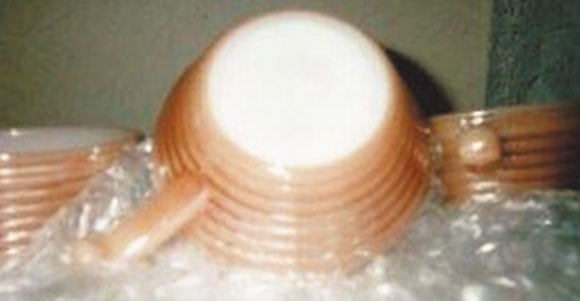 I have a set of six Fire-King baking dishes. I’ve had these for more than 40 years. They have never been used. On the bottom of the bowl it says, “Oven Fire-Kingware, made in the USA.” Each has a number, but not the same one.

Your handled baking dishes are Fire-King’s Peach Luster pattern. In their pristine condition, they might sell for $5 each.
Old Fire-King can be used in the oven and in a microwave but CANNOT be placed in the dishwasher. Fire-King that has gone through the dishwasher has an irreversible dull finish, and damaged pieces don’t sell. This inconvenience may keep young women from collecting complete sets for everyday use, thus lowering value.

This chair is supposed to have been made in Germany. Does it have any value?

Although made in America, George Hunzinger emigrated from Germany in 1855 to make some of the earliest mass-produced furniture for regular folk. If this is one of his company’s pieces — and it looks like their work — it should be marked with a number.

Unfortunately, the number could be hidden under the original carpet upholstery. If it were mine, I’d wait until the carpet becomes too damaged for sitting to find out. Good-quality carpet rockers like yours are often priced at more than $500 but frequently change hands between a willing buyer and seller for less than $200.

Maple wood is especially hard and difficult to dent with a fingernail. It’s also heavy and light yellow in color, and from the picture, your chair looks to be made of maple.

This lovely piece was part of my father’s Indiana medical office from 1928 to 1973. He purchased the office from a retiring physician, and it had been in use since around the turn of the century. When my dad retired, that cabinet came home with ME!

I removed the heavy, ugly, dark varnish that was so commonly used on furniture. It turned out to be a beautiful oak, and the drawers I lined with new felt, keeping the original drawer pulls. It is so sturdy that it has no visible signs of wear, even in a new century!

As you can see, there is a tiny drawer that held small medical instruments with a lockable cubby below plus side drawers to hold bandages and the like.

Oak medical cabinets like the one your father owned are often used as a focal point of a room. With the various drawers and sizeable space behind the locking door, it could store anything from hats with plumes to tall coffee urns. It’s hard to hurt oak, so it would be safe in a game room or den. If you needed to sell it, I’d ask $550. But it seems as though you might want to keep this treasure in the family.

Thanks for sharing it with us.