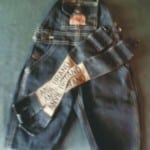 These overalls were given to my wife by her father. He owned a feed/grocery store in the 1930s and ‘40s. These were samples of the Anvil Overall Company. They were displayed in the store for customers to see before placing an order. They are about 13 inches from bib to hem. They’re in clean condition with no holes, stains or fading. All buttons and labels are in place. They’ve never been washed. Hope you can help with age and value.

Salesman’s samples first generated orders for furniture- and gadget-makers in the mid- to late 1800s. Originally, salesmen would physically carry small representations of products by wagon, train or riverboat to potential buyers. As towns grew to support mercantile establishments like your father-in-law’s, the same samples helped buyers see and touch the products available for order.

This pristine pair of Anvil Brand Overalls was made in the early 1930s. They had a colorful cardboard panel sewn onto the front that declared they were “supreme in comfort for wearing or working.” A pair, including that panel, recently sold for $250 on eBay. Washed and worn overalls, not as nice as your pair, with slightly rusted buttons are purchased by doll collectors for Buddy Lee (a big, boy doll) for $25 to $50. 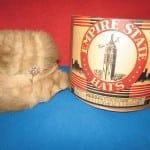 My mother recently gave me a vintage hat (and box) she purchased at an antique auction. I have not been able to locate much information on it or the company that made it. The box says “Empire State Hats” and “Tops ’em all.” It has the size marked on the outside of the box, style No. 688 and the color “gold.” It is a fur hat with a beautiful brooch-style pin, and the inside of the hat is beige felt material. It appears to be a “cloche”-styled hat.

Banded, fur hats like yours from the 1960s sell at estate sales for $8 to $18. They aren’t stored in hat boxes. The brooch, however, may have a tiny mark on the clasp that could increase the hat’s value.

Empire State Hats made men’s hats and is known for fancy fedoras. The box’s built-in rings hold the hat securely in place and reduce the risk of crushing. Similar colorful round boxes sell for about $15. I didn’t see a top — that’s important. 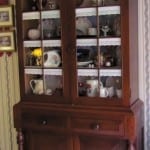 Can you please give us some idea of the worth of the attached item? The Jackson press (that’s what his family called it) was originally purchased by my husband’s great-grandparents. He is 78.

A Jackson press made in the mid-1800s with chamfered doors and drawers, full turned pilasters, a flat bonnet and glazed glass doors can sell for $5,000 to more than $20,000. The higher value is realized if the piece has its original finish, pulls, glass, hinges, shelves, locks and back panels and comes with a solid history and knowledge of the maker and his work.