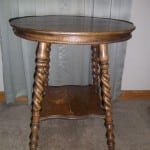 When my mother passed in 2001, I received a table she had in our home for many years. It is in our home presently and is used as a piece of our furniture. She had said this table originally came from her great-grandmother. We have a picture, seemingly taken in the early 1900s, of this table. I am not interested in selling this but would be interested in any information you may have as to the age and value of this piece. Thank you for your help.

Your family table was made in the United States and quite possibly sold through Sears & Roebuck’s catalog in the early 1900s. It sold originally for less than $5 and could be delivered to a nearby train depot where the buyer would pay cash on delivery to the station master. Well stocked town stores sold them, too. The sturdy legs of the table are described as rope-turned or barley twist. Mass production is indicated by the pieced construction of the lower shelf.

Although similar tables sold in the 1970s for well more than $100, they now bring a bit less and aren’t selling as quickly. The love of golden oak will rise again. It’s very durable and sturdy. 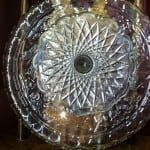 This was a small cake plate that had belonged to my husband’s grandmother who died in 1996 at the age of 99. I don’t know a lot of its history but was told it had been in the family for many years. Can you tell me anything about it? It has birds and strawberries as its motif. 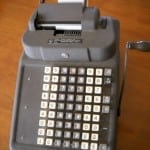 My dad wanted me to have a dish reviewed by you. I have also included a picture of an old calculator that belonged to my grandparents. Can you tell me what it may be worth?

A Burroughs adding machine with a crank on the side like your grandparents’ was considered a portable machine in the mid-1900s! The company, founded by adding machine inventor William Seward Burroughs in 1886, initially made machines for banks. The free-standing marvels had glass sides so curious patrons could see the magic of the machinery. The company survived until electronics replaced keys and cogs.

Hopeful sellers ask $50 to $100 for machines like yours. Office machines are a lively category of collecting, but sales of midcentury models are generated by low prices. At a tag sale, one might snag a late-model Burroughs for less than $20.