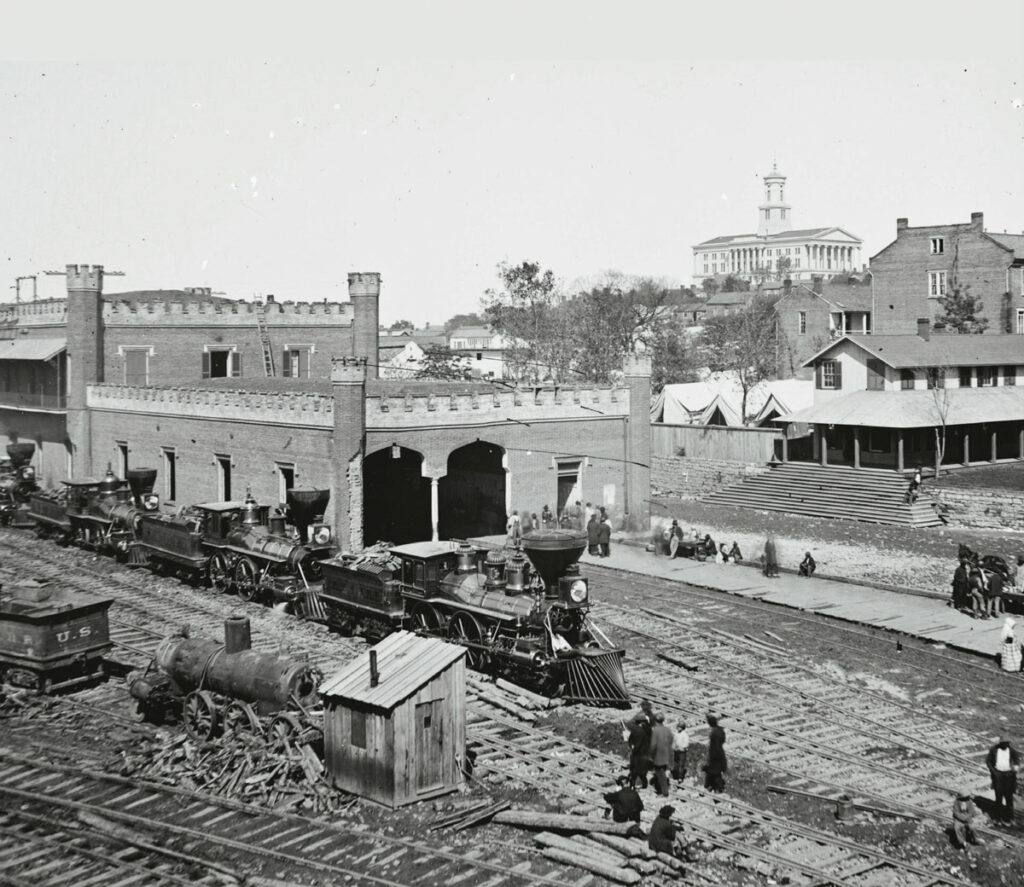 Trains picked up where the riverboats left off, making important hubs out of four Tennessee towns

Tennessee has four principal cities: Nashville, Memphis, Knoxville and Chattanooga. What made those four cities? Railroads.

After all, none of the four really emerged before the railroad. In 1830, Shelbyville was comparable in population to Nashville. The Tipton County town of Randolph still rivaled Memphis for superiority along the Mississippi River. Knox County had about the same population as Greene, Hawkins and Monroe counties. Chattanooga didn’t even exist yet.

All this changed because of the railroads. Although the story of each railroad is complicated, here are their basic summaries:

The hubs where railroads intersected emerged as places where raw materials such as cotton, lumber, corn, minerals and vegetables were unloaded, traded and sent to manufacturing plants. Thousands of people were drawn to these railroad hubs and still live near them.

What happened to communities that didn’t have a railroad connection at all? Most of them faded — completely in some cases. Consider the fates of the town of Washington (in Rhea County), the port town of Cairo (Sumner County), the community of Columbus (Polk County) and the former county seat of Purdy (McNairy County). No railroad, no more town.

Here are four examples of how railroads helped towns become cities and the lack of a railroad kept another town or county from growing:

In 1830, Bedford County had a larger population (30,396) than Davidson County (28,122). But by the late 1850s, Nashville had a direct rail connection to the Atlantic Ocean (via the Nashville and Chattanooga Railroad) and another direct rail connection to the Ohio River (via the Louisville & Nashville Railroad). Shelbyville, meanwhile, had access to the Nashville and Chattanooga Railroad but only via a short dogleg.

Nashville’s railroad connections helped that city grow and develop industry in the 1840s and 1850s. By 1860, Davidson County’s population was more than twice that of Bedford County. By 1880, it was three times that of Bedford County, and Nashville had emerged as a central location for wood and lumber processing, flour milling and other industries.

By 1920, Davidson County’s population was more than six times that of Bedford County.

Before the railroad, you could build a case that Kingston had a strategic location about as favorable as Knoxville’s. After all, Kingston was — and is — where the Clinch and Tennessee rivers meet. Roane and Knox counties were comparable in population in 1830.

Eventually, however, the East Tennessee and Georgia rail line passed through Knoxville, not Kingston. Knoxville would eventually get a direct rail connection to Cincinnati as well. By 1880, Knox County had 39,000 residents to Roane County’s 15,000.

Chattanooga didn’t even exist in 1830 (at that time, present-day Chattanooga was Cherokee land). When the town took its name in 1838, Hamilton County’s population was far less than that of its neighbor to the northeast, McMinn County. But when the railroads came, Chattanooga became a hub — the intersection of the Memphis-to-Charleston route and the Nashville-to-Savannah route.

Thanks to the railroads, Hamilton County’s population was even with that of McMinn County by 1860 and was more than four times that of McMinn by 1910.

In 1830, Shelby County and Tipton County had very similar populations (both around 5,500). Several events helped Memphis prevail as the dominant city of West Tennessee, but I would argue that the railroad was by far the most important of them. By 1930, Shelby County’s population was more than 10 times that of Tipton County.

Here is one final point about railroads coming to Tennessee: The timeline as to exactly when points along the rail line were connected to each other is very complicated. Suffice it to say that these initial connections were all in place by the time the Civil War started.

I don’t think the strategic importance of those railroads occurred to everyone at the beginning of that war. But they would be clear by the end of it.