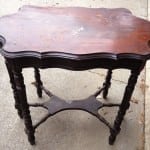 Might you be able to tell me anything about this table? We found it in the attic of my in-laws’ house. The legs are attached with metal brackets/screws, and there are numbers underneath it: 5003, 1/2.

Thanks for any information you can give me about it.

You’ve rescued a circa-1930 six-leg turtle-top table. The top is inlaid in a geometric pattern. Tables with shaped aprons on all sides were used for lamps, oftentimes in front of windows. I think your table might bring less than $100, although I can’t be sure from the limited photo. But the top looks slightly ruffled, maybe cracked. Attics are bad for furniture. In excellent refinished condition, similar parlor tables can sell for more than $200.
People are buying less-than-perfect 20th-century tables to stabilize and paint. They might say your table has “good bones.” 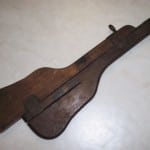 I enjoy your column, “It’s Just Stuff.” Attached are two photos of what my mother told me was a rug needle that was passed to me from my great-great-grandmother. I have never seen this item before anywhere and don’t know how it is used. Could you shed any light on it, and does it have any monetary value?

Once again, mother’s right. This simple, sliding wooden tool is called a shuttle punch, rag rug or hooking needle. It might sell for around $30. I think your needle was made around 1930. Threaded strips of fabric were looped into canvas with the sliding (threaded) needle. Rug patterns were featured in needlework and ladies’ magazines.

Our interest in the 1960s in anything early-American inspired boxed reproduction rug-hooking needles. They were also wooden but clearly marked by manufacturers. Their presentation almost looked as if they were novelty items rather than useful tools. Beginning in the 1960s, the accumulation of clever things in boxes became a national pastime. 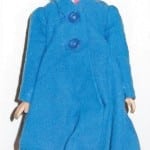 I have had this Mary Poppins doll since 1967. She’s in very good condition with original clothes. It is 12 inches tall. Could you please give me the value?

The Horsman Doll Company made your Mary Poppins doll in the early 1960s to coincide with the release of Disney’s movie in 1964. A doll like yours, including the coat, blouse, tie, socks and boots, might sell for $20. Sellers offering a doll with the complete outfit, including hat, carpet bag and umbrella, are asking $50 to $75.

Collectors trying to assemble a complete doll will pay $6 each for socks, boots or tie. Hats, carpet bags and umbrellas sell for $12.