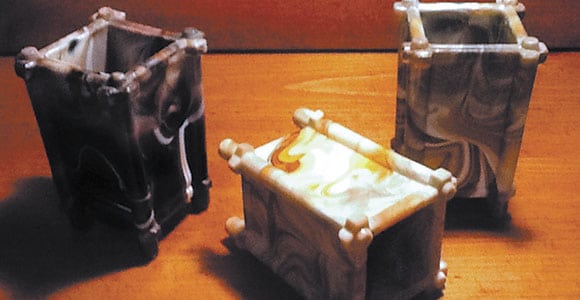 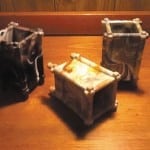 These glass containers were among glassware, china and other antiques my grandmother collected. I love the swirled colors of glass but would like to know more about them.

Your slender vases were made by combining color to white glass while the mixture was still molten. It was originally called marble glass, but most people today refer to this creamy mixture as slag glass. They were made by Imperial Glass Company in Bellaire, Ohio, in the early 1900s and sell for $6 to $28.

Imperial started production in 1901. Its most popular product was the Candlewick dinnerware pattern. The company made a wide range of wares from artist-produced art glass to whimsical glass animals and fun-colored decorative items.

After changing hands many times, the company finally folded and sold its molds in 1985. It was sad. There are clubs of collectors who gather to talk and trade glass. It is the glass of our mothers. 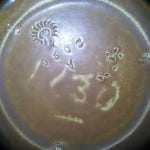 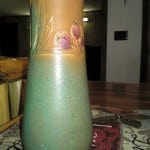 I have a vase I inherited from my mom. The bottom is unblemished. I am sending a picture of the vase and the bottom with all the markings. I would appreciate any info you have.

Thanks so very much,

This muted brown to blue vase was made by Rookwood Pottery Company in Cincinnati, Ohio, around 1905. It might sell in the $500 range. Because I can see only a slice of the pattern, I can’t be sure of this value, but the marks on the base don’t alert me to higher value. Rookwood marked items with a backward “R” connected to a “P,” all surrounded by a sunburst. It is very collectible. Like Imperial Glass, there are clubs for Rookwood enthusiasts. 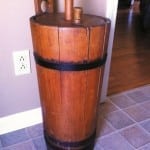 I’d always wanted a butter churn and found this one. I’ve never seen one like it before: It narrows at the bottom rather than the top. Its outside diameter is 11 inches at the top and 8 inches at the bottom, and it’s 22 inches tall at the lid. You can see that one of the staves extends above the top and has what looks to be a peg hole where it could hang. The bands are hand-riveted (the bottom one is missing). The outside rim of the lid is also banded. The dasher is complete. There are no markings on it at all. Hopefully you’ve seen a churn like this before and can tell me about it.

It is a bit unusual. In the country we’re used to people making additions to items used for daily chores. The extended stave with a hole, which must have allowed the churn to be off the floor when not in use, is logical. The shape is a bit more difficult to explain. Let’s ask readers to email their ideas about the reasoning on this. And while you all are thinking and emailing (NOT CALLING) — what’s the purpose of the short knob beside the dasher? If I had to price your butter churn in a pinch, I’d ask $250 and see what happens.