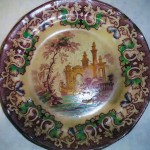 This plate has been handed down for ages in our family. One report has it coming from England somewhere in the Mayflower era. I have shown it to several people over the years, and none could find it in their books and sources.

Can you identify the manufacturer and date of the plate?

Well, maybe just after the Mayflower. This plate was made in North Staffordshire, England, by potter Charles Meigh. Between 1835 and 1849, his company, Old Hall Earthenware, often marked their work with the initials C.M.

This same Athens-pattern, three-color, polychrome-decorated, brown transferware plate is offered online for $40. I hope you’ll continue the family tradition of handing down the plate. 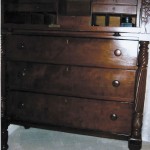 This chest has been in my family since the mid-1800s. It is 54 inches tall, 45 inches wide and 24 inches deep. It has three drawers, and the top folds down to make a desk, which also exposes drawers and pigeon holes. We have always called it a butler’s desk.

Is that what it should be called? Although we want to keep it in the family, we would like to know its value.

Yes, your chest with the drop-front top drawer is called a butler’s chest. If one had a butler, he could easily conduct the business of the house from this circa-1835 piece. I love the intricately carved, full pilasters that flank the lower drawers and the cleverly constructed fitted interior.

To replace this chest in the retail market would cost $2,000 or more. In a pinch, though, they can sell for painfully little. So plan ahead accordingly, please. 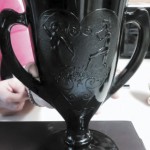 This vase belonged to a family friend. We’re not sure how old it is or its origin. We have been told it is called “black milk glass.” Do you know anything about it?

Your double-handle, urn-shaped vase is black amethyst. The deep purple color can be seen by looking through the vase at a bright light. Black amethyst was introduced to Americans in 1920 by L.E. Smith Glassmakers. In fact, L.E. Smith made a vase similar to yours with a square base and fluted top edge.

I was unable to identify the maker of your vase. It was common in the early 1900s for glass-makers to slightly alter and rename popular patterns made by competitors. Similar vases sell for $10 to $20.