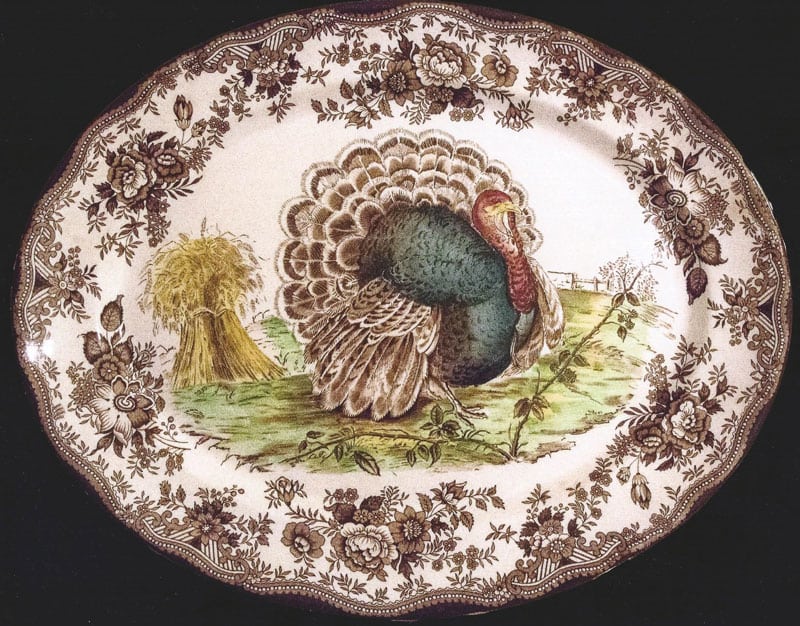 My wife and I ran across this little jewel at an estate sale we were conducting. It does not work and did not sell, so the owners gave it to us to clear the house. We have since taken it to almost all the local antique dealers, and nobody has any information on it.

It’s very different in that it is a double-drop-leaf radio and record player but was also made to use as a table. I found a tag showing it is a Philco Model 53.

You seem to have sources nobody else does, so if you could shed some light, it would be very much appreciated.

Compactly situated inside a mahogany-finish table with radio station display on top and a turntable in the drawer, this little table was the entertainment center of 1953 when Philco introduced its Model 53-1790. The company suggested that lifting the leaves provided the perfect place for one of its table model television sets.

The radio had five tubes and received AM radio and special services channels. Potential buyers might be enthusiasts who collect and restore Philco radios or buyers who might refit the radio and repair the turntable. A nonworking table model Philco radio/record player sells online for around $50.

I inherited these tin cups from my grandmother. My great-grandparents were immigrants from Sweden. I was hoping you knew where and when these tin cups were made.

Before plastic and after glass (circa 1950), manufacturers introduced aluminum drinking glasses. Your tumblers are aluminum and most likely made under the name Sunburst or Bascal in Italy. Originally, the colors were more vibrant and shiny.

Like the use of plastic today, aluminum drink ware was favored for picnics, casual entertaining and camping. Pristine examples are offered for a couple of dollars each.

I would like to know more about the two platters I own as well as their value.

The turkey platter is 19 inches by 15 inches. The mark reads “Royal Staffordshire by Clarice Cliff Made in England.” There’s a hairline crack showing on the back.

The Baronial Hall platter is 17.5 inches by 10.75 inches. The mark, in a crest-shaped design, says “Baronial Halls TJ and J Mayer Long Port.” It is in perfect condition. 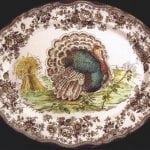 Both platters are described as Staffordshire as they were made in that pottery-and platter-rich part of England. The official name of the turkey platter pattern is Tonquin Brown Turkey Center. The transfer was created by Clarice Cliff (1899-1972) after World War II. Although Cliff is best remembered for her art deco designs with bold colors on angular pottery, her home-on-the farm patterns were popular after the war. An exact same platter recently sold on eBay for $77. It is offered for retail at replacement sites for as much as $350.

Made by TJ & J Mayer’s, your blue transfer ware octagonal platter was made around 1860 at its Long Port, England, site. Mayer’s pottery was recognized in 19th century expositions and favored by royalty of the era. Today, however, these large platters sell for $35 to $70 online. I found an exact match on LiveAuctioneers.com that sold for $175 in 2005. Value is a moving target.