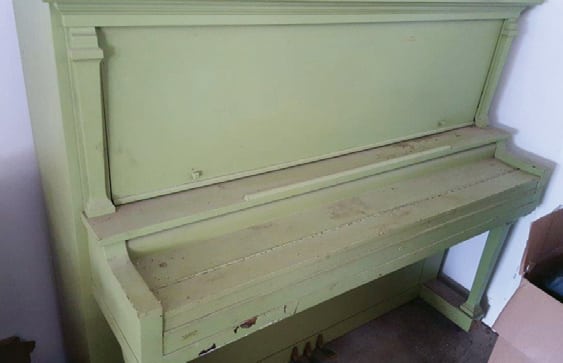 We moved to Shelbyville last summer and “inherited” a Behr Brothers & Co. piano. The previous owners of the house we bought had it displayed inside the home but moved it to the garage for storage until they settled into their new home in another city. After several months, I contacted them to see if they were ready to pick it up, but they had decided they didn’t want it.

I tried to research history about the manufacturer but didn’t get very far. Nothing I could find went farther than 1900. Inside the piano reads:

Can you tell us what we have in our garage?

Henry Behr began making pianos under his name with a partner 1880. The name changed as Henry became sole proprietor and added brothers. The mark “Behr Brothers & Co.” is from 1890 to 1910, after which the name changed to simply Behr Brothers Pianos. There is a serial number inside the piano on the metal frame. Serial number lists with dates of production are available online.

Behr made good-quality pianos that can still produce fine sound today. Restoration is always an option but costly if a piano is painted and stored in the garage.

Sellers typically ask $100 to $200 for a similar upright piano or simply donate it to a willing hauler.

My aunt gave this mini pitcher to me several years ago before she passed away. Can you offer me any information about it?

Your aunt’s ruby-to-clear glass or ruby flash glass pitcher is 120 years old this year! It’s a souvenir from Tennessee’s Centennial Exposition in Nashville in 1897. Fairgoers could have their glassware inscribed with a name. Toothpick holders, sugar bowls and several other items were offered. The deep red was added after the glass was pressed. Similar pieces sell for $10 to $45.

When I was a young child, my grandparents had a hobby of driving to Gatlinburg many times a year and buying antiques. They sold things at local antique shops.

This table was left to me at my grandmother’s passing. I’m interested in learning anything you may know about it, including the style and value.

What a nice memory and walnut Eastlake Victorian marble-top lamp table. Made around 1880, the style was inspired by architect Charles Eastlake (1836-1906). His furniture design motif included the use of incised lines, finials, cut-outs and geometric patterns.

When your grandmother was selling, similar tables brought $400 to $550. Today they sell for a fourth of that.

These two long-playing records were promotional gifts from Wisk detergent and Avon Co. in the early 1980s. I’ve had these records since that time. What is the money value of these records, and is there someone who would want these?

Even though vinyl albums have begun selling again, the prices realized are still low for widely available albums. The Avon Christmas album and Wisk detergent ’50s collection are offered at $8 to $10. They sell for $1 to $3 on eBay and Craigslist or at antique malls and tag sales.