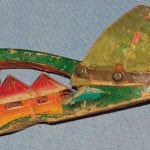 These shoes belonged to my mom. My father was in the Navy during World War II, and I have always assumed he brought them home from overseas to Mom. Can you give me any information about the shoes or their value? I’ve never seen any like them.

Hand-carved and hand-painted wooden wedge mules were purchased by American troops in the Philippines in the 1940s. All of the shoes have relief-carved scenes in the heels of thatched huts and palm trees. They were novelty postcards of sorts that you could wear. Few pairs offered for sale are perfect. People buy them for display at $20 to $60 a pair.

My father received this Majestic radio from a lady back in the 1970s in exchange for painting her house. She told him her father bought it for her mother as a present back in the 1920s. My father put the radio in an “oldest radio” contest in Nashville back in the 1970s, and it took first place. It is a nice piece and actually still works! I’m interested in learning the value of this radio and any additional information you may have on it.

Here’s what I discovered while researching your award-winning radio. It was manufactured in 1928 by Grigsby-Grunow in Chicago. Made of walnut, the Majestic Model 71 was referred to as a consolette with low-boy legs. It sold new for $137, which in the 1920s was likely a fair trade for painting a house.

Restored, working Model 71s sell for just over $500. Cabinets with nonworking original parts sell for around $50. Radio collectors on-line speak of a mechanism used to slowly turn the radio on to avoid shocking the tubes and such. It made me realize there’s a limit to the life of an old radio.

Years ago I purchased this bed at an antiques store in Nolensville and was told it was a sample bed used by a traveling salesman. That’s all I know … nothing about the age, manufacturer or value. It is a great conversation piece for sure!

Anything you can tell me about it would be wonderful.

The kids in our family have played with this cabinet for 75 years. We have always heard it was a sample used by salesmen to sell full-size furniture.

The flat surface is painted wood that is so scratched it almost looks like a marble, otherwise it is in very good condition with an approximate size of 24 inches wide by 38 inches tall.

Another reader writes: “Salesmen’s sample furniture and tools were sold by traveling vendors after the Civil War and into the early 20th century. Detailed but small, these representations of the real things were less than one-tenth the size of an original. Think of a salesman placing his product on a table to show and sell. If marked by the manufacturer or maker, a salesman’s sample can sell for a few thousand dollars.”

Carolyn: Looking at the size of the windows on each side of your bed, it seems large enough for child’s play. The walnut Victorian-style headboard is as intricate and well-made as a full-size double bed of the period. If I were selling your bed, I’d ask $300 and consider any offers over $100.

Jack: I think the kitchen cabinet made of oak with tiny pulls, casters and imitation porcelain top is the size of a salesman’s sample. These cabinets were sold through the Sears & Roebuck catalog, so I’m not sure salesmen were on foot as well. It may be a child’s doll cabinet. Toys for children at the turn of the 20th century were often miniatures of items used by adults. I’d place value around $300 because the tiny casters are extraordinary. A mark of attribution would greatly increase value, so look again!