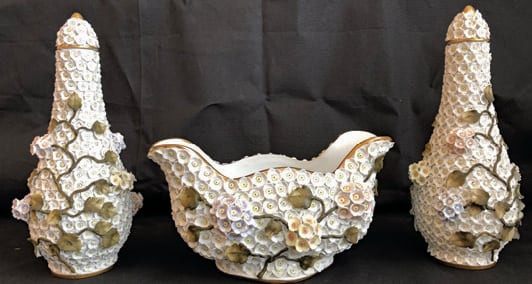 I saw your article in The Tennessee Magazine and decided to send this picture of my father’s drafting table and stool. It is more than 70 years old. My father used it when he went to drafting school. He died in 1991 at the age of 71.

I have kept it all these years but need to downsize. Is it worth anything or just to me?

Simply made, functional drafting tables like your dad’s sell for $100 to $250. If you find the maker’s name, the sales price could increase.

Downsizing is difficult. Remember that you aren’t selling your dad, just his stuff. Why not keep the stool and let the table go?

These serving plates were left to me by my grandmother. I believe she said she bought them at Cain-Sloan in Nashville around 1920. They appear to be gilded, and on the back are the words “Theodore Haviland New York Made in America” and “702 G.”

The mark on your grandmother’s Haviland was first used in 1937. Called service plates or chargers, these flat, round plates were used to set a fancy table, even before food was served. A plate of food was placed on top. Service plates with heavy gold and strong colors can sell for $50 to $250. Emotion often affects the prices of old Haviland because many buyers are seeking to complete or add to family sets.

Haviland China was produced in thousands of patterns. Dealers specializing in Haviland use the blank and pattern numbers created by Arlene Schleiger. I own her 1973 fourth-edition five-volume set. It was self-published. The black-and-white images of thousands of patterns were drawn by her son — after school. The number 702 G is not listed and may be a factory number.

My grandmother gave me this set of vases with matching bowl. I figured out they are called snowball vases, and many were made by Meissen. These do not have the Meissen mark but do have numbers in red on the bottom. I did some further research and found that Jacob Petit made high-quality copies of Meissen items. They are in good condition with relatively few chips. Do you have any idea as to the actual maker of these as well as value?

To make your mantle set, moist clay was manipulated to form hundreds of tiny florets overlaid with vines of more flowers in bloom. I don’t think it is Meissen. First made in this pattern in the 1730s, Meissen should show some damage due to age. But the gold on your set is dull, not glitzy like Meissen’s. This is not to say all Meissen is marked, and certainly all porcelain with blue crossed swords is Meissen. However, I expect Meissen snowball to be more colorful with birds and assorted flowers all around the piece with some forms extending out from the mass of florets.

Examining the marks of a snowball-pattern lamp online, I saw the same red number marks with a gold foil label of a Japanese porcelain-maker. It is priced at $270 on eBay. The pattern matched the muted green vines and yellow center flowers of your set. If offered, your three pieces might be priced anywhere from $300 to $1,000. If your three pieces were convincingly Meissen, you could add a zero to that value.