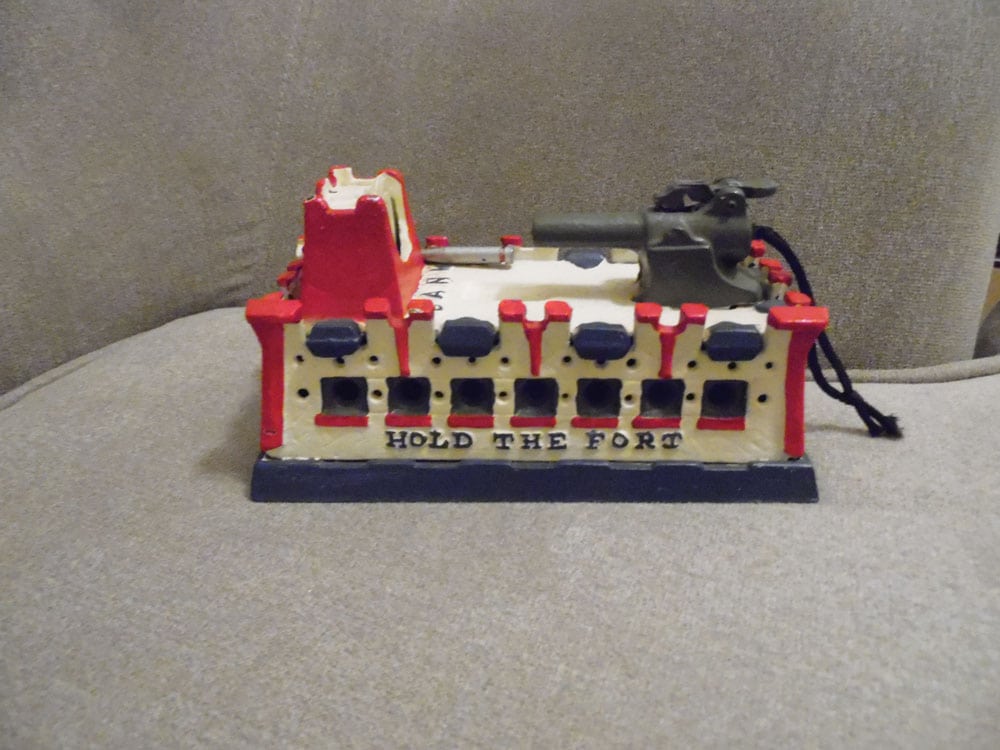 This heavy, metal bank is red, white and blue with a “Hold the Fort” inscription. It’s 3 inches wide and 7 inches long. Put a coin in the slot, load a projectile in the cannon and fire. It hits the coin, which drops into bank. It works well. The only other inscription is on bottom and says “Bits & Pieces.” Any idea on the age or value?

The first cast-iron mechanical bank titled “Hold the Fort” was patented in 1877 by Samuel Clark in New York. An original Hold the Fort from the late 19th century with five portholes on each side and a near-perfect patina sold in November for just more than $5,000. Many bidders were disappointed.

Modern reproductions like yours have seven windows and vivid red, white and blue paint. The mark on your bank — “Bits and Pieces” — is that of a company that sells novelty items, including cast iron mechanical banks and playful puzzles. The company’s used banks sell on eBay.com for around $20.

Cast-iron banks, old and new, are popular collectibles. No matter the ages, most still work to trick and delight people into feeding them coins. The cost of new banks is such that I’ve encountered some impressive accumulations.

I began seeing reproductions of cast-iron toys in the mid-1970s. Early on, I realized that banks constructed with Phillips head screws were not from the 19th century, but some reproductions were less obvious. Because original banks can bring such high prices, it has inspired the devious to rough up new ones and sell them as old. Clubs have formed among serious collectors to educate the public on the subtle differences of old and new banks and to alert fellow enthusiasts of new reproductions.

A friend found this chair and refinished it. We are curious about the style. Any ideas?

Your friend did a nice job restoring this Louis XV Revival Victorian parlor chair with an Art Nouveau twist on top. Typically, when furniture has a motif from numerous time periods, it was machine-made.

This set of eight plates and cups belonged to my great-grandmother, I think. Any information regarding their age and history would be greatly appreciated.

The mark of a castle surrounded by the words, “Leuchtenburg Made in Germany” on the back of your snack set pieces tell me they were made by the Lehnmann & Sohn Porcelain Company in Kahla, Germany. The words “made in” date the pieces after 1914 but before the end of World War II. Yellow opalescent on white porcelain outlined in black is stunning, and the shape of that plate, oh my!

Because other readers will want to know, the set of eight might sell for $45 to $75.