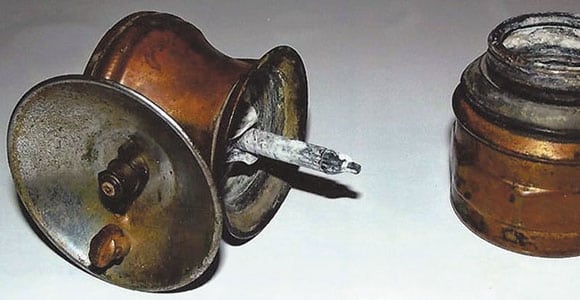 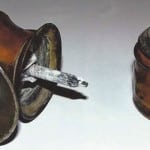 I was wondering if this coal miner’s light has much value. It uses carbide and is marked on the bottom, “Made in the USA, Auto-Lite, Universal Lamp Co.”

Thank you so very much,

Small carbide lamps were first used for bicycles in Europe and the U.S. around 1900. The Universal Company made carbide lamps from 1913 to 1960. Traditional-style spelunkers (cavers) collect and use restored models. Lamps like yours sell online for $15 to $65 each, depending on quality. I found a pristine lamp with its original box offered at $90. 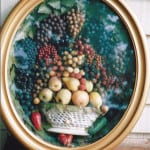 This three-dimensional shadowbox bowl of wax fruit belonged to my aunt, who inherited it from her aunt. It is in excellent condition. I would like to find a new home for it and wonder what it would sell for.

Numerous wax arrangements in an oval frame and in the same half-bowl have sold recently. The amount paid is from $200 to $400 at auction. Most are described as 19th century. Because so many arrangements are on the market with the exact same gold frame and exact same gold-and-white bowl, it makes me think it’s from the early 20th century. I may regret this, but I’ll ask my readers to tell me if they have this exact shadowbox of wax fruit and, especially, when it was new. 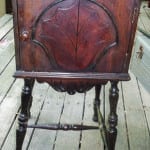 I acquired this piece (2 feet tall) at auction in Chattanooga about 12 years ago, where it was listed as “Copper-lined tobacco chest made in Chattanooga.” The sticker on the back indicates “Tennessee Red Cedar & Novelty Company, Chattanooga, TN.” I do not recall what I paid for it, but there was more spirited bidding than I anticipated — probably because it was a local piece.

What can you tell me about the manufacturer and the piece itself, including age and value?

Apparently, Tennessee Red Cedar and Novelty Company made small furniture pieces and accessories. In addition to your little humidor, it produced half tables and small cedar boxes. It provided the lumber and craftsmen to produce Cavalier cedar chests in 1923. It’s this association and product for which the company is best known.
Because summers can be moist in Southern homes, humidors were a preferred place to keep matches and tobacco dry. Certainly, a covered box would work, but a designated stand is even better.