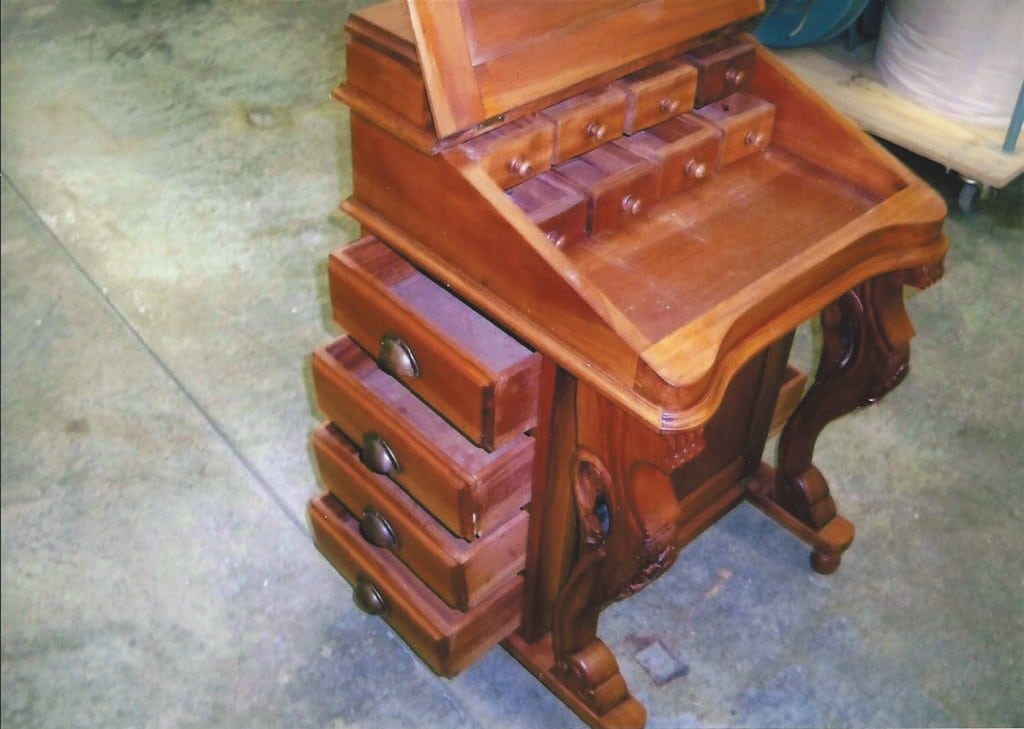 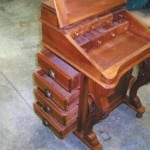 What is this thing? It is all wood, very well made, sturdy and in excellent condition but does not appear to be restored. To me it looks like a small desk. But why so many drawers, a total of 16? Do you know its value?

Your little imported reproduction is called a Davenport desk. They sell for $75 to $200. Although unconfirmed, it is thought the original Davenport desk was commissioned by a British captain named Davenport in the late 1700s. They are also referred to as ship captain’s desks. More elaborate models have hinged doors that close over the side drawers to keep them shut and secure. All Davenport desks are small and feature slanted tops and small drawers or cubby holes beneath. Two hundred-year-old models sell for a couple thousand dollars. 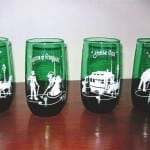 These glasses belonged to my grandmother who passed away in 1973. Neither my mother nor my aunt knows where she got them. They just remembered them being at her house. They have no markings on the bottom, just the beautiful pictures on the side. Would you happen to know where they may have originated and possibly their value?

Your grandmother’s forest green glasses were made by Anchor Hocking after 1937, possibly in Ohio. With the white enamel decoration still in pristine condition, your four glasses could be priced around $50 in a shop. You might sneak up on a few more at an estate sale for a couple of dollars, though. Keep them out of the dishwasher. 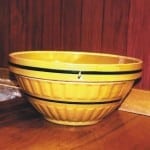 This old bowl was in a two-room schoolhouse in the Williamson County community of Flat Creek. My mother cooked there in 1942 while my sister and I went to school. There was no plumbing, just a well for water that we heated on a wood stove. In 1950, a new school was built with three rooms, cafeteria, plumbing and heat. The bowl moved, too, and was used in the new building. The school is now a community center. It hosted a benefit auction recently where I bought the old bowl my mother made biscuits in — for $300. It has a number 14 on the bottom and a small crack in the side. Could you please find some information and a value for it?

Thank you for sharing your mother’s sweet batch of biscuits and memories with us. I’m glad you got the mixing bowl. It’s called yelloware because of the creamy yellow-colored clay. A simple clear glaze secures the decoration of brown lines and press-molded pattern. Lard probably contributed a bit to the patina. The flat collar indicates the bowl was produced in the late 1800s to World War II.

Hairline cracks in a well-used bowl are often overlooked by buyers. Memories and love of local history are often a factor in auction purchases. I applaud your support. In a shop, however, with no known history, this same bowl might be priced around $75. The imprinted number 14 indicates the diameter of the bowl.