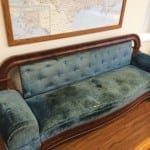 Attached is a picture of an old couch I used to sleep on when I was a kid. It was in my grandmother’s house, and I adopted it after she passed away. I do not know of its origin but thought I would ask you. Thank you for your time.

Your grandmother’s sofa is Empire with a sleek but simple flame mahogany veneer. The style originated in France in the late 1700s, often with added gilt trim and exotic woods. Yours was made in the early 1800s before coil springs had been invented, so it may have been covered in woven horsehair or even stuffed with curled horsehair.

Similar sofas, often upholstered in slept-on velvet, can be purchased for as little as $300 at estate liquidations and household auctions. If the horsehair upholstery were restored, the same sofa might sell at a higher market for well more than $2,000. 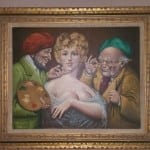 I picked up this oil painting at an antique auction for $45. I spotted it as soon as I went in the door and fell in love. The painting is signed by R. Nippress and has “Contemplating the Model” written on the back. The frame measures 38.5 inches by 32.5 inches. Thank you for any information you could share in The Tennessee Magazine.

Robert Nippress imitated the works of 18th-century artists and added subtle humor to many of his paintings. Each reproduction was signed “R. Nippress” along with the name of the original artist and his or her dates of birth and death. If, for instance, he reproduced a Gainsborough, it would say “after Gainsborough.” He favored street scenes involving beggars, vice and casually clothed women. He also created colorful paintings of slapstick comedy scenes involving kids, old people and chaos.

Although I could not confirm it, he seems to have resided in the Carolinas. I find no evidence of his death. Recent works sold were painted in the 1980s. They sell currently from your $45 to $150 from auctions in North and South Carolina, where his paintings must be hiding in estates. 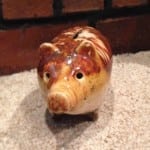 My mother gave me this ceramic pig. She said it was my grandfather’s piggy bank that he got when he was 6 years old in 1901. I was just wondering what it is worth. Thank you.

Your grandfather’s brown, drip-glazed, hole-eyed piggy bank is offered at $85 and sells for around $50. It was made in the late 1800s. 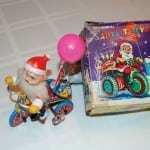 The box is labeled “Santa Mechanical Tricycle.” Any idea what year it was made, and is it worth much? I am not selling it but curious about the history of it and when it was made. Thank you for your time.

This sassy Santa on a tricycle was made around 1960. Tin litho, wind-up toys from this era in working condition with pristine boxes sell for $12 to $40. The tape and tears on your box reduces value by one half.