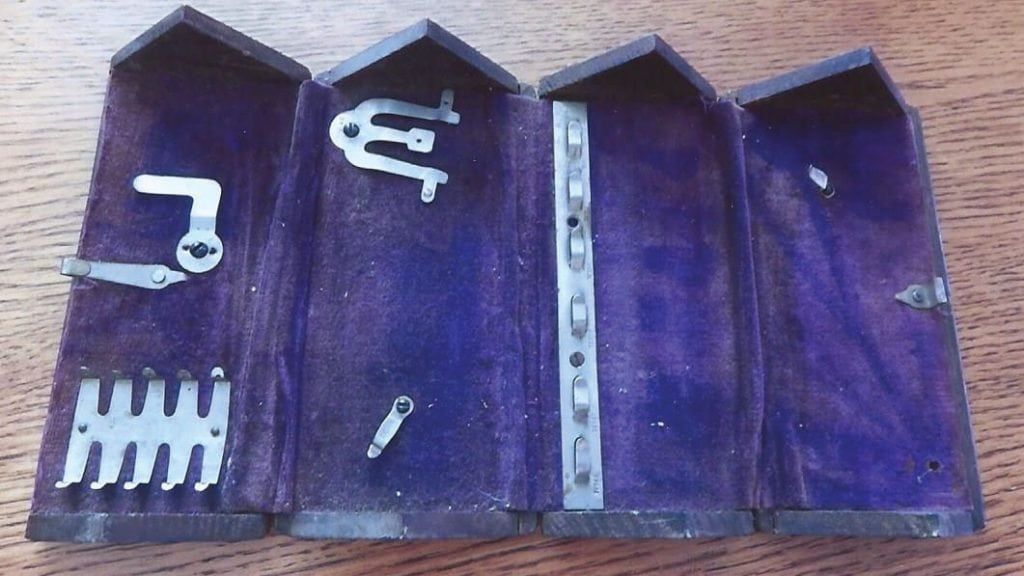 Thanks for your column. I hope you can help me with my question. I purchased this colorful vase at an auction around 1980 for $25. It is 10 inches tall and about as wide from handle to handle. The bottom has the word “Italy” and the number 340. It also has an arrow in a circular shape. Can you give me any information about this beautiful item?

I would describe the piece as a double-handle jug. To me, a pitcher has a lip, but a jug has a spout. It was traditionally used for storage and for sharing what’s stored. It has a polychrome acanthus and scroll pattern. The “kicker” for me, though, are the fish-shaped handles! If I were selling the jug, I’d price it at $95 and be sure to mention the fishy handles.

I’m enclosing a picture of a compass that was made in France. It belonged to my father, and I haven’t seen another like it anywhere. It is certainly rare. Please tell me something about it.

The faintly impressed mark on the face of the compass, “made in France,” indicates the piece was manufactured after 1914. Considering the availability of similar compasses online and in the cubbies and drawers of my clients, there are lots of them around. You, however, are the first to take the time to photograph and share a compass with all of us. After World War I, people began to travel for jobs and adventure. I guess they needed direction.
Your compass probably had a cover to protect the glass and was worn around the neck on a leather strap or heavy chain. People under age 45 are buying tools and functional items from this era. They are offered for $22 to $75 but seem to sell for just under $20. I think their value will go up, but not enough to change your life.

This “box” belonged to my mom. She died 30 years ago. We have no idea what it was used for. It looks to be some kind of tool box. We would love to know for certain and also its worth.

Made around 1890, this box was made for Singer sewing machines and held tools, attachments and spare parts for the company’s treadle machines. It was called the puzzle box because the contents had to be in their specific places in order for the box to close. Included were spare needles, bobbins and a leather belt for the machine’s wheel along with attachments for hemming, tucking and quilting.

With all or most of the tools intact, similar boxes are offered and sell for around $35. At that price, it would appeal to people who enjoy restoring and repurposing functional items from the early 1900s.