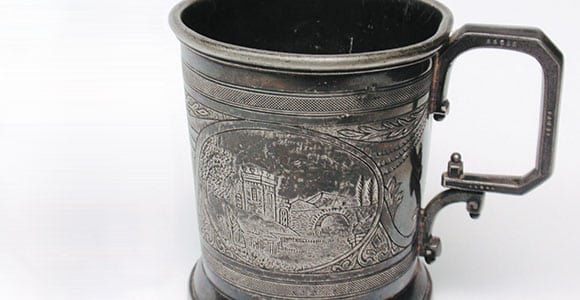 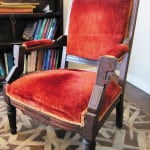 Dear Ms. Connie Sue,
My mother-in-law has this antique furniture group that is made of walnut and upholstered with crushed red velvet. There are six of the straight-backed chairs. We know the set had been reupholstered with the velvet prior to purchase by her father in the early 1950s.
Can you give us any information regarding the age, style and value of the set?
Thanks,
James

Dear James,
Your mother-in-law’s Eastlake Victorian parlor suite was made circa-1880. With the six side chairs, base rocker, gentleman’s chair and settee, it’s an impressive nine-piece set. Although Victorian furniture has waned in popularity lately, potential buyers will be awed by the number of pieces.
The original upholstery may have been black and prickly horse hair with straw stuffing. As is, the set might sell at auction for between $1,200 and $2,500. 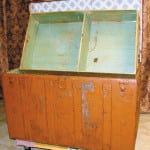 Connie Sue,
My wife’s mother had this trunk in her home. It had been passed down from her grandparents, and we think it dates into the early 1900s. It is missing a part of the lock and leather straps but overall is in good shape. It is sheeted with metal with wooden “runners” on all sides. We are passing this down to a granddaughter who will take good care of it. Can you tell us about it?
Joyce, McMinnville

Joyce,
Flat-top travel trunks like the one you’re passing along were made worldwide between 1880 and 1920. Labels on trunks came later as they were mass-produced. I typically price a nice-sized trunk with the tray intact from $125 to $175 for an estate. Restored, the trunk might be offered by a proud and optimistic seller for more than $500.
Redoing a camel-top (rounded top) was the first step into the world of antiques for my mother. I remember her rubbing the metal with steel wool, stripping the paint from the staves and replacing the missing side handles with one of my dad’s old leather belts. Your granddaughter may want to do something similar or simply paint it to match her tastes. Many an heir has used a flat-top trunk as his or her first coffee table. 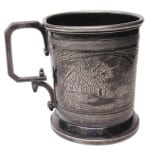 Hello, Connie Sue,
Several years ago I found this child’s cup in a junk shop in New England and have been using it as a pen holder. But now I’ve become curious about it. It feels light but has a charming engraved scene on it. Can you find out anything about it? Stamped on the bottom, as nearly as I can figure it out, is, “MFD & Platers Read & Barton GB B.”
Thanks,
Jim, Sewanee

Hi, Jim,
Reed and Barton began making sterling and plated-silver flatware in 1824. It initiated the use of pictorial marks on its hollowware in 1928. The lack of that pictorial mark on this child’s cup indicates that it was made before 1928 of white metal and then electroplated with silver. I can’t tell if the thin layer of silver has worn away or could be brightened with polish. But it was made to be shiny like sterling silver. It should sell in an antique mall for around $20.